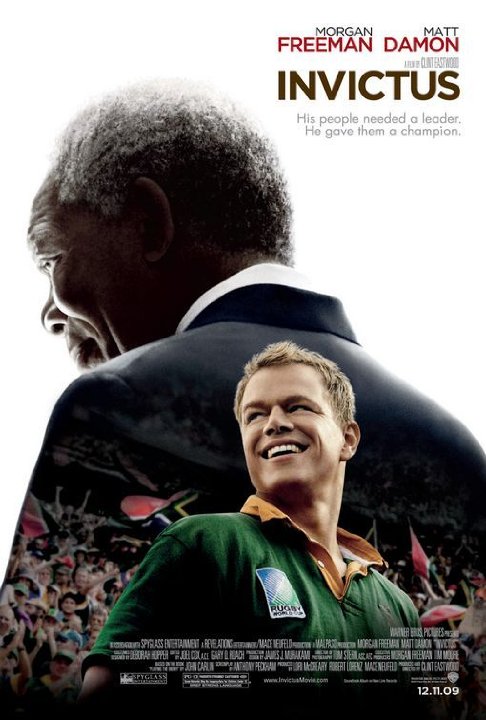 Plot: After the fall of apartheid in South Africa, newly-elected president Nelson Mandela must find a way to unite the people of his still-divided nation and finds a common interest with the popular rugby team. -- Chris Kavan

I love this movie. It gets me every time. Unsurprisingly, Morgan Freeman makes this movie. Matt Damon is also good, but he isn't Morgan Freeman as Mandela. If this movie doesn't make you slightly obsessed with Rugby and Mandela there is something wrong with you.

A unifying sports film that moves beyond politics to become a story of simple human victory. Morgan Freeman is, as expected, commanding as Nelson Mandela, but it is Matt Damon who surprises here with a nuanced portrait of a rugby striker that is equally as strong as Freeman's portrayal.

A good film as usual from Clint Eastwood, with great performances from Morgan Freeman and Matt Damon. The story is about how Nelson Mandela used the South African rugby team to help unite his bitterly divided country. I wasn't really familiar with the story so it was exciting all the way to the end. This will be one you'll be hearing about come awards season.

Nelson Mandela: "Forgiveness liberates the soul. It removes fear. That is why it is such a powerful weapon". The film tells the inspiring true story of how Nelson Mandela joined forces with the captain of South Africa's rugby team to help unite their country. Newly elected President Mandela knows his nation remains racially and economically divided in the wake of apartheid. Believing he can bring his people together through the universal language of sport, Mandela rallies South Africa's underdog rugby team as they make an unlikely run to the 1995 World Cup Championship match. The acting in the movie was brilliant and the directing by Clint Eastwood was nothing short as fantastic. But movie goes drag in most of the scenes and the movie is kind of forgettable to be honest.

The inspiring true story of how Nelson Mandela (Morgan Freeman) joined forces with the captain of South Africa's rugby team, Francois Pienaar (Matt Damon), to help unite their country. Though the movie is primarily about South Africa's challenge in winning the rugby World Cup against insurmountable odds, I found the story of Mandela's emergence from prison to prominence and power equally as fascinating. During the first half of Invictus, we follow the character of Nelson Mandela on the following days to his election as a President; however, on the second half, the screenplay changes its focus and it becomes a sport movie, dedicating most of the time to a very important rugby match which was very exciting. Enlightening, heartwarming, Freeman was superbly cast and the character of Mandela …

Inspirational sports movie with some politics

A good sports film that also inter splices politics well. The film shows Nelson Mandela as wanting to unite the country under the South African Rugby team. It lays out why this is important to the country and how Mandela does it incredibly well. After it lays that out though it does actually become a standard inspirational sports movie but a well done one. This movie works because it does not take unnecessary sides and merely gives all the characters their due. I particularly likes the details of the security details with the blacks and whites interacting there. It is not perfect though because rugby as shown in the film can be somewhat boring to me anyways and the use of computer graphics is distracting and does not seem to be Clint Eastwood forte.

No posts have been made on this movie yet. Be the first to start talking about Invictus!