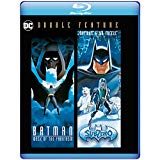 Plot: As Gotham's crime lords begin showing up dead Bruce Wayne finds love, but must continue to protect Gotham as the new menace, Phantasm, also stalks the night. Things get even more problematic when Phantasm attracts the Joker's attention. -- CJP

Not only is it a worthy continuation of an amazing animated series, but "Mask of the Phantasm" is a great adaptation of Batman just in general.

Action: 3/3 + Comedy: 0.5/2 + Good vs Evil: 1/1 + Love/Sex: 1/1 + Special Effects: 1/1 + Plot: 1/1 + Music: 1/1 = 8.5/10 or 85%. While this is a predecessor to the Dark Knight it shares some common ground. Namely that Bruce Wayne discovers a new love interest and the Joker appears. All this while a new menace called Phatasm begins stalking the night and Gotham's crime lords keep showing up dead. This is a superior animated entry that carries on the atmosphere of the animated series.

This stylish animated adventure is based on the '90s animated television series, which in turn is based on the original comics and Tim Burton's live action "Batman" films. Unlike the campy 1960s version of Batman, this version is half-mad from the superhero's obsession with justice. It is only his unusual sense of ethics that keeps him from becoming a full-blown psychotic. The story describes the origins of Batman as it follows the Dark Knight's attempts to capture the elusive, deadly Phantasm who kills a crime lord and makes it look as if Batman did it, causing a media smear campaign against the Caped Crusader. At the same time, millionaire Bruce Wayne holds a party at his mansion. There he meets Councilman Arthur Reeves, the man behind the accusations. Reeves derides playboy Wayne for …

Ah, the 90s. A time of innocence. A tim of awesome movies, where Nirvana and Blink-182 ruled the music scene and Dragons roamed the skiesâ¦.never mind that last part. It was also a time where animated movies kicked ass, especially superhero animated movies. Now of course, the only good animated movies are released straight to DVD (Gotham Knight should have had a theatrical release!). Around this time, a movie that is perhaps one of the greatest animated movies of all time (second only to the Lion King), and one of my favourite movies of all time. That movie is, of course, Batman: Mask of the Phantasm.

In the 1990s, Batman: The Animated series was released to huge acclaim. It was dark, epic, and was made just as much for adults as it was for kids. Now, it is considered a gem of the …

No posts have been made on this movie yet. Be the first to start talking about Batman: Mask of the Phantasm!