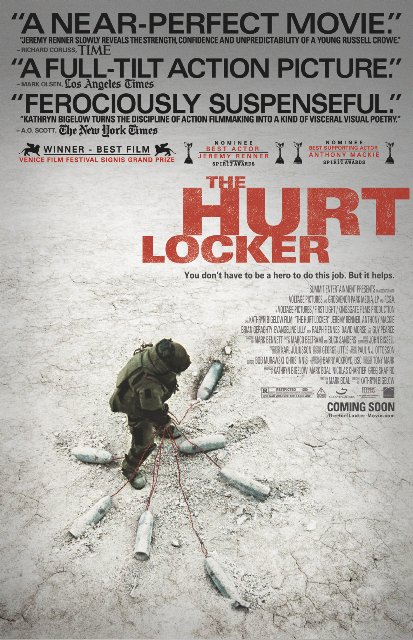 Plot: An elite bomb squad in Iraq is assigned a new sergeant who wastes no time taking his unit into the deadly urban chaos with reckless abandon. As his men struggle to understand his death wish, his true character is revealed that will affect every man.

This war drama about a bomb squard in Iraq is uncommonly human, depicting its soldiers not as combatants fighting for one side, but individuals surviving in the middle.

As his men struggle to understand his death wish, his true character is revealed that will affect every man. This movie has great acting and brilliant directing by Kathryn Bigelow.

The best film of 2009 is a harrowing observation on the bravery and resolve of a bomb squad stationed in Iraq. Director Kathryn Bigelow creates moments of true tension without the use of big Hollywood spectacle - a sniper scene is incredibly intense and other sequences of failed bomb disarmings have an air of poignancy. Jeremy Renner gives a breakout performance, but the all-star cast blends chameleon-like into their characters.

War is a drug!

"The Hurt Locker" is an exposition of the mindless addiction that war can turn into and of the horrors practiced in it. From the very intense opening, Kathryn Bigelow grabs the audience and does not let them go as she meticulously examines the complex realities of war, and the effects that war can have on the psyche of a soldier.

The central axis of the film is around Renner's character SSgt William James who has defused over 800 bombs and approaches the task with a bravado that terrifies his more conservative colleagues. He does NOT do things by the book and seems to take many unnecessary risks. In some ways, he seems like a man with a death wish but he always gets the job done in the most difficult of situations. James keeps little momentums ('signatures') …

"The Hurt Locker" by Yojimbo

A US army bomb disposal tec makes waves in his new unit because of his Gung Ho attitude. The Hurt Locker is an interesting war film, mainly because its indie sensibilities make it a very unusual treatment of this subject for a product of the US movie making industry. It's quite a reserved, unsentimental film about the impact of a "war" that has no visible enemy; not quite in the same way as Jarhead in which the soldiers just could not find an army to face, but because the enemy hides itself in plain sight amongst the innocent population. This obviously causes great conflict within the soldiers, always unsure whether to fire or not to fire and seemingly never able to punish the perpetrators of the atrocities they witness on a daily basis. It thankfully avoids heavy-handed patriotic …

âThe Hurt Lockerâ is a soldierâs eye view of the current war in Iraq and follows a team of U.S. Military bomb technicians in an Explosive Ordinance Disposal Unit as they serve out their final 40 days in that country. Director, Kathyrn Bigelow (âK-19: Widow Makerâ, âPoint Breakâ, âBlue Steelâ, and âNear Darkâ) chose to film this in a cinÃ©ma vÃ©ritÃ© style; giving her work the look & feel of a documentary. This approach works much better here than the stylized special effects and slow motion sequences that have been routinely applied to other similar films. The result is a very graphic, in your face, presentation of conditions on the ground for the soldiers being depicted here.
According to author, Mark Boal (who was an embedded journalist in Iraq for two weeks in …

No posts have been made on this movie yet. Be the first to start talking about The Hurt Locker!