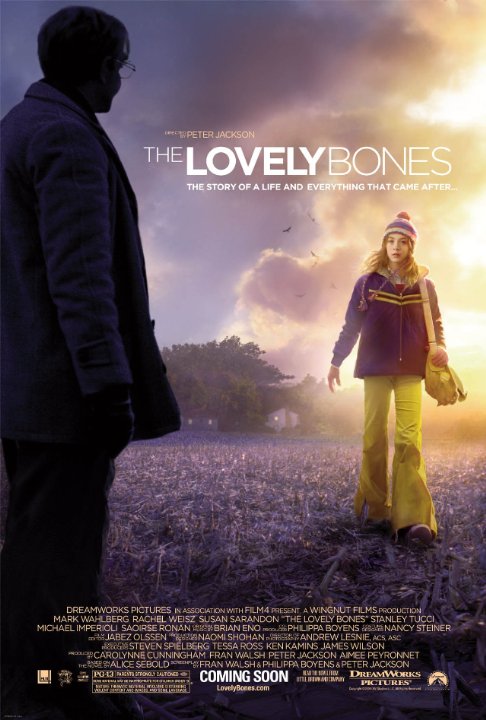 Plot: Based on the novel by Alice Sebold - When Susie Salmon is murdered, she watches from heaven as her family deals with the tragedy and their interactions with police, friends and even her own murderer. -- Chris Kavan

"The Lovely Bones" is an utter mess in story and tone.

A weirdly emotionally dissonant film that goes dark places without heart or purpose. Stanley Tucci turns in a masterfully despicable performance as a child murderer, but everyone else in the cast sleepwalks through their roles. The film tries to make something wonderful out of a distasteful event and it doesn't work at all.

A poor version of What Dreams May Come and Here After. Susie Salmon (Saoirse Ronan) narrates her story. Her parents Jack (Mark Wahlberg) and Abigail (Rachel Weisz) get worried since Susie has been missing for 4 hours. Some minor qualms this reviewer noticed were the lack of an impacting role of Lynn (Susan Sarandon), length, its lackluster conclusion, coy love angle and pacing. The score, performances especially from Stanley Tucci and special effects were fabulous. Some nice lines: Susie - "There was something I was meant to do; somewhere I was meant to be." "I was here for a moment, and then I was gone. I wish you all, a long, happy life." The intent was wholehearted but the execution and mix of violence and sentimental gorgeous cal scenes were contradicting. The Lovely Bones …

"The Lovely Bones" is not for everyone to digest easily. It fixates on the most heart-wrenching situation that can happen to a family, namely child abduction and murder. The film's story is told through the narration of fourteen year-old suburban teenager Susie Salmon (Saoirse Rona) who is lured and murdered by her pedophile neighbor George Harvey (Stanley Tucci) on the 06 December 1973, in Norristown, Pennsylvania. When Susie dies she is stuck in a limbo, the In-Between, unable to accept going to Heaven. From the In-Between she watches her family as it starts to fall apart because of the grief and seeing her murderer avoid becoming a suspect. She starts trying to break through, trying to comfort her family and help lead them to her murderer.

Saoirse Ronan is absolutely brilliant as …

"The Lovely Bones" by Yojimbo

A 14 year old girl is murdered by a serial killer and watches from a fantasy land of her own creation as her family seek the truth as to what happened to her and come to terms with their loss. Released to a veritable mixed bag of love and loathing, Peter Jackson's adaptation of what was essentially a "kid's book" is a combination of family drama, serial killer thriller and ghost story that actually works really well. Young Saoirse Ronan puts in a great central performance as the murder victim, and the treatment of her family and relationships lacks the usual saccharine and clumsy melodrama you'd usually associate with subject matter such as this. The imagery of her fantasy world is beautifully realised and Stanley Tucci's performance as the seemingly normal yet creepy killer combined …

No posts have been made on this movie yet. Be the first to start talking about The Lovely Bones!