Plot: A sex addict tries to acomplish 2 things that seem to be releated. Save his mother and save his addiction. He knows his weaknesses but as the story unwinds it becomes more clear what the original problem is. As he goes from girl to girl while trying to help his mother, his sexual problems escalate.

This may sound strange, but Sam Rockwell choking on food is really compelling.

With the movie success of Fight Club it makes sense that someone would attempt to put another Palahniuk novel on the big screen. Having already read the book I feel I had a greater appreciation and understanding of the film. I'd recommend the book over the movie any day but the movie was very enjoyable.

Adapting any Chuck Palahniuk to the big screen is a huge undertaking, but I think Choke worked out pretty well. It stayed pretty close to the source material - it was uneven at times, but overall it was a decent film. 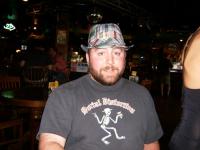 Chuck Palahniuk is far and away my favorite writer. I've read Choke 3 times now, and love it more and more each time. I think if I had not read the book, I would have LOVED this film. Unfortunately, the movie is NEVER as good as the book, so I was left wanting more. The ending was quite a bit different, and while that initially irked me, I realize now that the book's ending would have SUCKED in live action. I think Clark Gregg (and I might be in the minority here) did a great job with this film, considering how low budget it was.

Choke is one of my favorite books, so I will always be critical of the film...I could just tell how much information they were trying to cram into a 90 minute movie.

I'm ready for a film adaptation of Palahniuk's book Survivor now....I just want to see the …

I've read all of Palahniuk's books. Fight Club was AMAZING in film form, but the book is always better than that movie. No exception here. Chuck Palahniuk's books are not for everyone, but the way he always makes Nihilism and Pessimism fun is simply mesmerizing. If you're a reader and feel like trying something new, I highly recommend his novels (&quot;Snuff&quot; excluded, but I'm giving him a mulligan.)

I saw it (obviously).&amp;nbsp; Has anyone read fight club?&amp;nbsp;&amp;nbsp; I hear it is good but different as well.

Has anyone else seen this movie yet?

Choke is completely different. But now that you mention it, there is the common thread of mental illness. BTW I like how you added the forum option so you can talk about the movie even if you haven't seen it :)

I saw the trailer for this recently and even though the main character isn't what I expected - I will probably check this out. Chuck Palahniuk wrote this (and Fight Club). Fight Club is spectacular - I don't think Choke will outdo that one.&amp;nbsp; As an avid reader I can say there isn't anyone quite like Palahniuk out there. I just got done reading his latest novel Snuff and am still pretty sure he has one of the most twisted, demented and gifted minds out there. Most of his novels are short, &hellip;