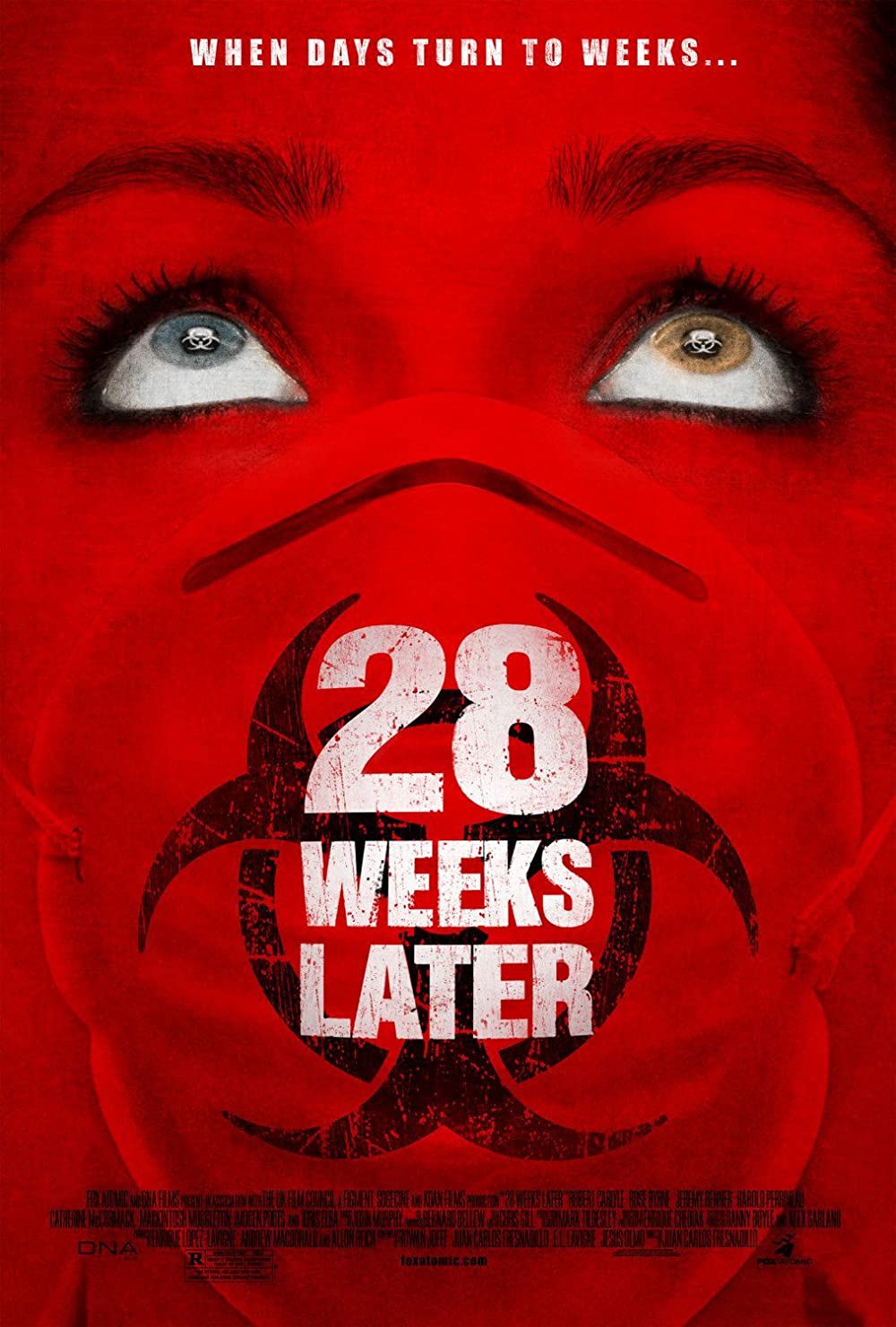 Plot: 28 weeks after a virus turns Britain into mindless, flesh-eating zombies. The US army has helped secure a small part of the island. But for how long?

After Humanity's near recovery, citizens of the UK team up with the US military to engage the still lingering threat left from 28 days later that is their own staggering incompetence. From poor judgment in civilian access grants, to badly planned evacuation procedures, the audience will cringe at every stop on this blood-bathed ride.

The devastating rage virus that annihilated the British Isles mysteriously resurfaces in Goya Award-winning director Juan Carlos Fresnadillo's sequel to the Danny Boyle-directed horror hit that terrified audiences worldwide by offering a breathless new take on the familiar zombie mythos. This movie had more gore and more blood and that scene with the helicopter was pretty cool but bad CG for that scene.

This is a brutal, suspenseful flick that is quite difficult to watch at times. Once the carnage and cannibalism begins, it hardly every lets up. Credit the director, Juan Carlos Fresnadillo for following Danny Boyle's style and tone in the original film.

An American led NATO force is sent in to supervise the re-population of Britain when a new outbreak occurs and the military loses control of the situation. A sequel to the OK but not amazing 28 Days Later seemed a little unnecessary to me but I must admit, I enjoyed it. It has none of the social allegory of the Romero zombie films and really is just a long chase sequence, but it is very efficiently handled. I liked the way that none of the characters were sacred cows who you KNEW would make it to the end of the film and the inter-family homicide obviously echoes the influence of the grandaddy of these flicks, Night Of The Living Dead. The basis of the plot actually shares rather more in common with another of Romero's films The Crazies but 28 Weeks Later is actually more successful than …

Don (Robert Carlyle) and his wife, Alice (Catherine McCormack) tries to escape the infected humans. Sergeant Doyle (Jeremy Renner) and his friend, Flynn (Harold Perrineau) try to save the survivors Tammy, Andy and Major Scarlet Ross (Rose Byrne). Tries to combine the camera styles of Bourne Ultimatum and Blair Witch. The story moves slow but the action and gore was bountiful. It showcases better location settings and soundtrack; however the conclusion depletes the overall story. The pushing of the eyes was taken from 28 Days, and the familyâs story was just too depressing and the military exhibits stupidity by even killing the uninfected people. It likewise wastes the talented Renner as he dies with the idiocy of his comrades. Some of the performances were at times irritating, …

Packs One Hell of a Bite!

A sequel that is as good, at times better, than its predecessor. What made this movie better than the original is that there were more scenes where the characters were being attacked. With that comes a sense of danger lurking around the corner wherever they go, so the audiences anticipate what's coming and it becomes engaging. This movie also had some sort of progress: the focus is now on the family rather than the individual like in the first movie. It also embraced a possibility of how the virus infected others society-wise prior to the first scene in "28 Days Later." Not only that, they also managed to talk about the idea of a mutation and a cure which, as a Biology student, I appreciated because the scientists' explanations made some sort of sense. What this film lacked, nonetheless, …

No posts have been made on this movie yet. Be the first to start talking about 28 Weeks Later!