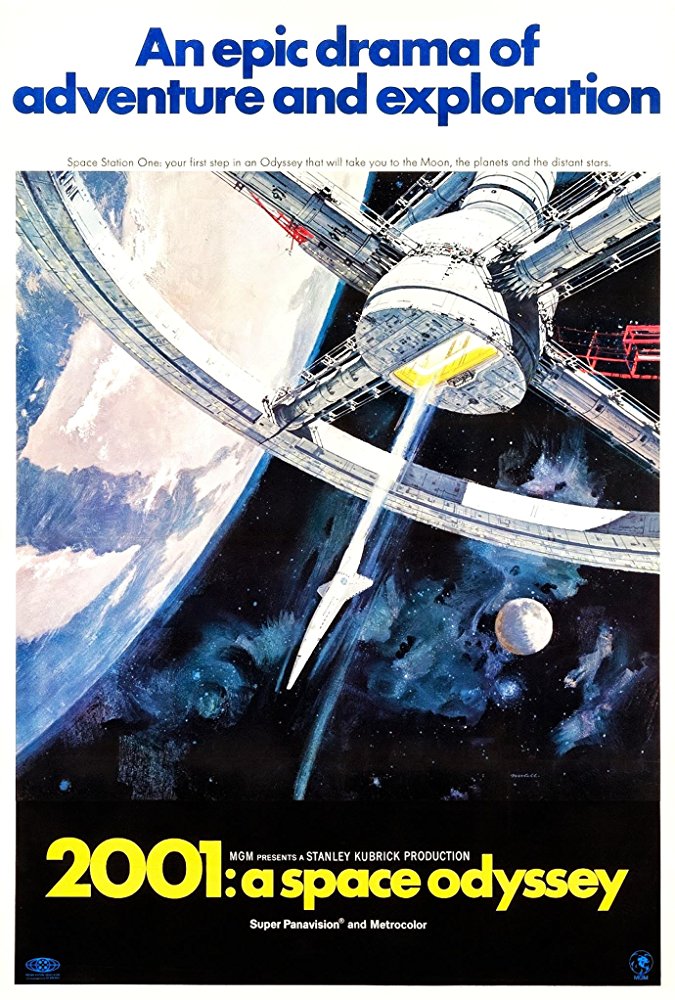 Plot: Set in the future, mankind discovers a mysterious buried object on the moon. A set of astronauts and a super intelligent computer are sent off on a quest to discover its origin.

It's a true cinematic masterpiece and one of the greatest movies ever made. It was a milestone for special effects, and the entire science fiction genre.

This is not hollywood drama, in this movie you think for yourself. It isnt cold film, although it may seem to those who are used to hollywood dramas. This film has much more to offer than those dramas.The gratest feeling in film is that kind of tragic but epic feeling about humanity. And that is something Cameron and Malick cant achieve even with all their effects. Space is really great experience in this movie, but this is not just space experience, after all that is not film or any art, this movie creates feelings and that is what film is all about. So, its influental film that still cant be beaten. Even though you can feel its age it still is one of best films.

So I just saw "2001" at a film festival and it was kinda incredible. Why do I feel like I just ticked off my bucket list of things to die before you die. I've been waiting a long time to watch this on the big screen. I already seen the movie about 3 or 4 years ago, but my memory of the film isn't that strong. So when I was picking what movies I wanted to see at (LIFF), and this was on the list, as the festival also shows classic movies.

Re-watching this movie was quite the experience. Nothing like a massive screen and loud speakers blasting off beautiful music while drifting in space. From the dawn of man till the end of human life. The cycle repeats.

But seriously, what can I honestly say about "2001" that hasn't been said already. It's one of the …

A Mind-blowing Journey through Life and Everything

2001 is differentâ¦ Let me put it like that.
Different from the way Kubrick's films are made. The way the film is made is like a usual Kubrick movie, but a little different. It has the ambient environment (like separated colors and furniture), it has the frigid cinematography, but it doesn't have the typical script.
I have mixed feelings about the script, because its structure is its main fault. The opening and first story of the film are absolutely amazing. I loved how the film was set up and how the music combined with the direction so beautifully.
Then came the second story and everything started getting wobbly.
And by the third I really didn't know how to perceive the movie anymore. That's both a compliment and a criticism.

Franz - I agree.&amp;nbsp; I watch it for the beauty (and the realization that it was made in 1968).&amp;nbsp; It actually relaxes me to watch this movie. The first 20 minutes do suck ass to me, but the remaining movie is a beautiful site.&amp;nbsp; I do understand when people say it is boring. It just depends on what you are into - and I am into stuff like this (though I have only seen it about 3 times all the way through).It obviously reminds me of Solyaris

I don't understand &quot;2001&quot; completely but I think that's the beauty of it. If I were to understand everything about a movie, I won't feel inclined to watch it again. The mystery keeps me coming back.As for recommending it to friends, I mention it to them... but I never actually URGE them to watch it (they like &quot;modern&quot; movies). I learn to keep certain movies to myself because I do get tired of comments like&amp;nbsp;&quot;It's so boring&quot; or (worse) &quot;Nothing happened!&quot;

I have to agree with Josh.&amp;nbsp; I love sci-fi, but have yet to get all the way through 2001: A Space Odyssey.&amp;nbsp; It is very boring.....I just don't understand.

Haha, I guess I am one of thoseÂ Idiots. I can't stand 2001. I just get so bored I can't watch it. I understand it is artsy, but to me I there are great movies that are not boring so why would I watch this one. An idea alone can only go so far.Â I do love Sci-fi films though, just not that one.Â

Hey there. Have to admit I never tire of watching 2001, it is simply mesmerising. However, getting OTHER people to sit down and watch it is a nightmare. No one will give it the chance it deserves You always get idiots who right away insist on pointing out that the apes look like men in suits. I KNOW THEY DO, BECAUSE THEY ARE! JUST WATCH THE DAMN MASTERPIECE UNFOLDING BEFORE YOU.&amp;nbsp;Fools...Anyone else find this problem with 2001&amp;nbsp;specifically or&amp;nbsp;with great (but long and sometimes a &hellip;