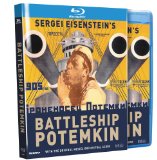 Plot: A Russian naval mutiny occurs, which leads to riots in the streets. -- sapien

"Let nothing divide us." "Shoulder to shoulder." "All against one." The massacre scene was very horrific, so disturbing especially the scene which The Untouchables could have been emulated, the baby on the stairs. Battle scenes were so realistic and artistically shot. The bountiful extras never disappointed while the score, editing and camera work was exceptional. Battleship Potemkin is a monumental war film filled with drama.

Besides the iconic baby carriage on the stairs scene, this is a mastery of editing and character moments that are placed within epic battle scenes. One of the best films from the 20's.

This movie was incredible. One of the very first full-length movies of its time and its still silent. The Staircase scene made my skin crawl and my body shiver as I watched in horror as the assailants merged on the town. I absolutely was overjoyed at the outcome of this movie, and for being so dated, this movie was brilliantly accuarte in its depiction of political justice.

Besides being officially and several times declared as the best movie of all time, Bronenosets Potyomkin is probably one of the most important movies ever created in the history of humanity. Sergei M. Eisenstein became one of the best geniuses of cinema for those times along with giant cinema icons such as F.W. Murnau and D.W. Griffith. Also, Eisenstein transmitted highly controversial, catastrophic and totally revolutionary ideas for those times, like if he stood for the population of the Soviet Union in its totality trying to speak out loud. With a movie like Bronenosets Potyomkin he didn't only create a masterpiece establishing his own filmic style which would be recognized for several decades to come, but he also was one of the few directors that actually understood the meaning of …

Best of the 20s by Protozoid

Top Films of 1925 by Neobowler

CineFixâs 100 Most Talked About Movies by Manuel Josh Rivera

No posts have been made on this movie yet. Be the first to start talking about Battleship Potemkin ( Bronenosets Potyomkin )!