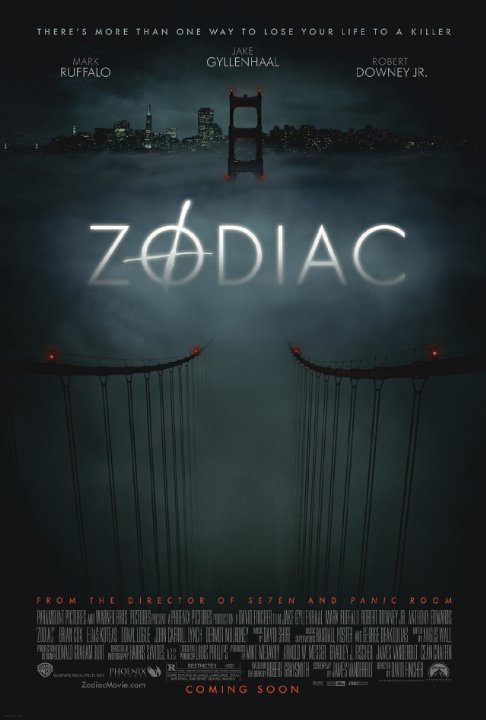 Plot: A serial killer in San Fransisco torments the media and the police while a cartoonist and an obsessed police officer try to catch him spanning 3 decades.

An excellent stylized noir, "Zodiac" is the closest David Fincher or ANY director has come to out doing his own detective masterpiece "Seven."

Inspector David Toschi: "Before I kill you, I'm going to throw your baby out the window". The story is about a serial killer in San Fransisco torments the media and the police while a cartoonist and an obsessed police officer try to catch him spanning 3 decades. The directing and the acting in this film was freaking outstanding. David Fincher knows know to show gritty and shocking scenes. The movie does slow down at times for me, but this is a well made thriller.

In typical Fincher style, Zodiac is an immersive trip through the dark corridors of a police investigation surrounding one of the most infamous unsolved murder sprees in history. The film does a great job at playing at the possible scenarios and doesn't deliver any sort of ultimatum as to who Fincher thinks is the killer, inviting the viewer to dive into history more to understand the case. Gyllenhaal, Ruffalo, and Downey Jr. are all fantastic, but John Caroll Lynch was the real standout for me as the hulking mountain of a man who maybe (probably) was the Zodiac Killer.

I like Jake Gyllenhaal's character in this movie. He is under appreciated at his job, and when he starts to investigate and build his own theories on the Zodiac killer, it affects his personal life and family as well.
The performances are almost Oscar-worthy, Mark Rufallo being the stand-out. They are so distinguished and every actor adds a personality to his character. They feel authentic, like real people that have something to lose. Perfect casting, perfect acting.
The script shows you just enough of everything. It doesn't use date-jumping (going from one year to the other) to its advantage, because it documents only what we need to see, while still leaving room for character development.
David Fincher has proven himself to be an amazing director, and I honestly think this is one …

Telling the story of a serial killer who terrorized the San Francisco bay area in the late 60s and early 70s,the narrative switches between the frustrated detectives that seem to hit a dead end every time they uncover a promising suspect and the obsessive-compulsive journalist who cannot allow himself to let the murders remain unsolved. It looks fantastic, Fincher bringing his trademark brooding atmosphere to a frighteningly cold blooded series of crimes (although for me the most disturbing murder scene actually took place in broad daylight) and the top notch cast all deliver. Those who need their stories to be tied up at the end in a nice big bow may not appreciate the open-endedness of the conclusion, but it is based on a true story, so what're you gonna do? It's perhaps lacking the …

Three men want to search who the serial killer is in 1969 onwards. Paul Avery (Robert Downey, Jr.) a Chronicle crime reporter, a cartoonist named Robert Graysmith (Jake Gyllenhaal) and SFPD Inspector David Toschi (Mark Ruffalo). Each character tries to find the pieces needed to resolve one of the most heinous crimes committed in that era. The cinematography was grandiose, script was cleverly executed and acting superb. Despite the length, each scene was essential in uncovering the conclusion. Film manages some comedic scenes despite its nature of the dark premise. In the words of one of the protagonists - Robert Graysmith - "Just because you can't prove it doesn't mean it isn't true." A film that shows persistence in finding the truth, this thriller delivers. Zodiac is one of the …

No posts have been made on this movie yet. Be the first to start talking about Zodiac!