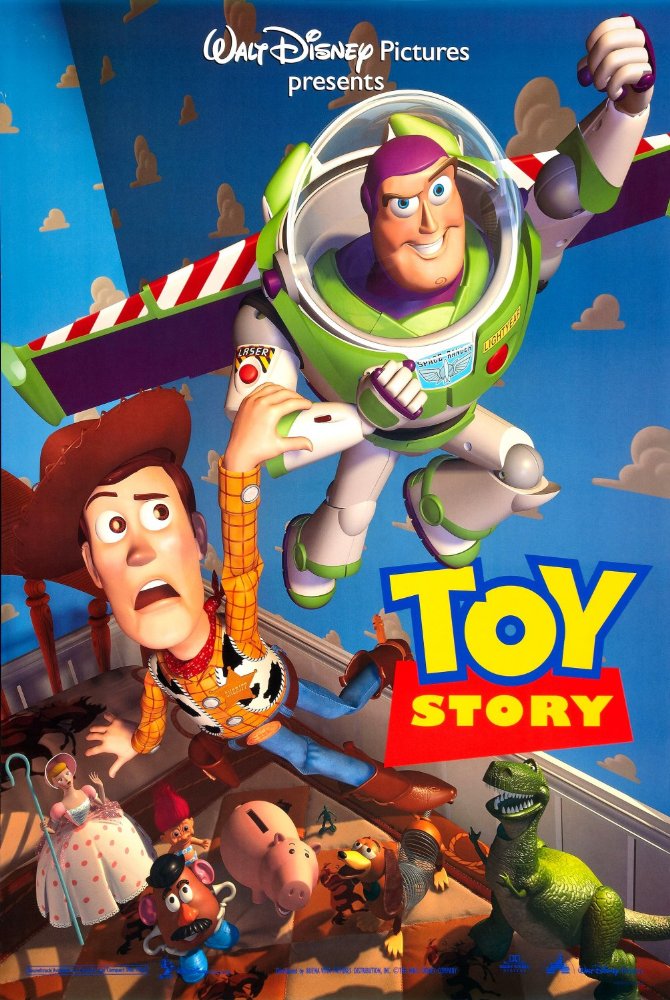 Plot: As the toys of a boys room argue, the Cowboy becomes jealous of a new "Buzz" toy and they embark on adventures of their own.

One of the most original and memorable animated films made, "Toy Story" was state of the art and remains one of Disney's crowning achievements in animation.

"You got a friend in need". This movie may not have the best looking animation from 1995 because it was a big step for Pixar, but the movie has awesome characters and a great story about to get along and work as a team to freedom.

THE animated movie! Pixar's 1995 debut film is one that is and will be remembered forever. It has launched a studio that has given us some of the best films in the past decades, and will continue to do so as long as it exists. While I feel Toy Story 3 is Pixar's best film, Toy Story gets similar praise. TS3 wouldn't have been perfect if this film had not been great. An epic, classic film. One of my favorites as a kid, but it still has the goods for entertainment now.

Pixar Animation Studios is one of the most respectable and admirable animation studios I've ever known alongside with Ghibli. Its enormous creativity, style and originality was noticeable since this studio started to make short films, some of them cool and admirable because of their visual aspect, and some others masterful because of all of the elements they had accompanied by a fantastic story. I particularly loved Tin Toy (1988) (which deservedly won an Academy Award for Best Short Film, Animated) and Knick Knack (1989).

It may be something really interesting and odd, but I still remember when I was 5 years old (almost 6) and I got to see this on theaters. Although I wasn't fully aware of the fact that this was the first feature film that was computer animated (in fact, I still …

Imagine if our cherished toys could have a life of its own, how would it react, move or do? The movie answers this with an adventure a cowboy doll and a space ranger figure. Woody tries his best to misplace Buzz so Andy can get his attention. Unfortunately, Buzz and Woody gets trapped in Sidâs place. They discover that the sadistic boy has a habit of destroying toys. Woody helps out Buzz while both of them try to get back to Andy. Some pleasing quotes: Buzz Lightyear â âI just want you to know that even though you tried to terminate me, revenge is not an idea we promote on my planet.â âTo infinity and beyond!â Andy â âYou saved the day again, Woody!â Woody - âFrom now on, you must take good care of your toys, because if you don't, we'll find out, Sid! [While …

Typical Disney movie for all ages

"Woody" (voiced by Tom Hanks) is "Andy's" (voiced by John Morris) favorite toy who has the honor of staying on the boy's bed. He is well respected by the other toys, who look to him as a leader.

All the toys are preparing for two big events -- "Andy's" birthday, and the move to a new house, which requires the toys to pick a "moving buddy" in insure that they all make the move safely. However, they are surprised when they learn that "Andy's" birthday party has been moved up a week. The toys are real nervous about what the guests are giving the boy, as they may be replaced.

All things seem fine, as there appears to be no toys that will replace any of the resident's of "Andy's" room. That is, unitl "Andy" and his party guests come in, and "Andy" knocks "Woody" off the bed and places …

No posts have been made on this movie yet. Be the first to start talking about Toy Story!