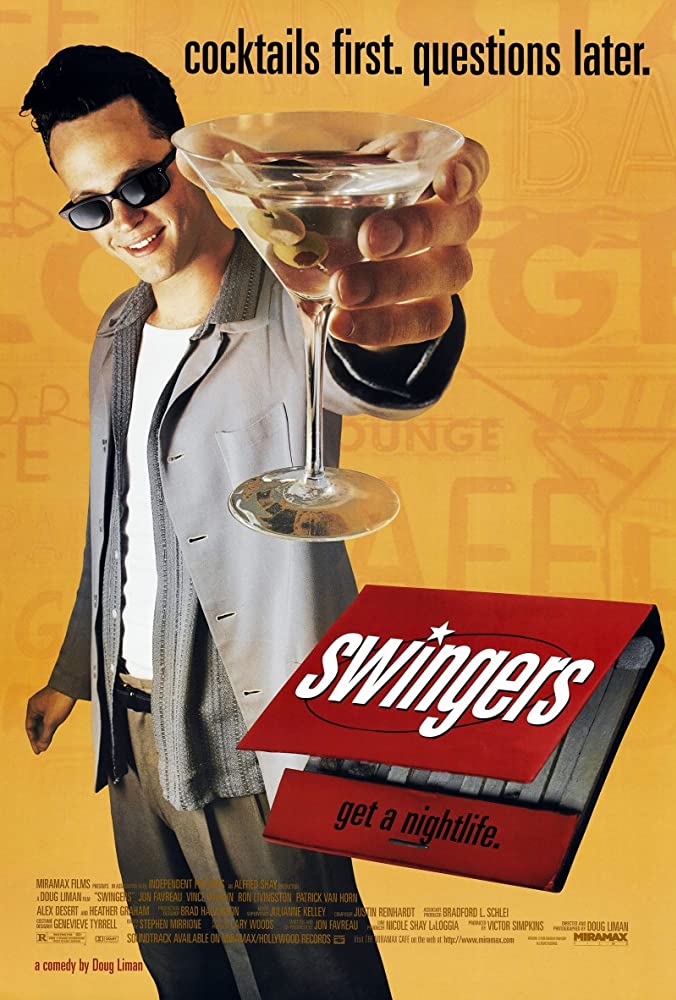 Plot: Mike is having a rough time after long-relationship ends. His friend Trent tries to make him forget and to enjoy single life by showing him a good time in Vegas and partying it up with some cute ?babies?.

I feel this is a little overrated but still a funny comedy. I would recommend it.

A well observed and witty comedy from the Nick Hornby/Mike Gayle school. I liked High Fidelity better, but it's still got some great lines ("I get older, but the girlfriends stay the same age!")

Swingers is an awesome minimalist comedy - about a group of friends who think that they're big time, when they really aren't. Although it's the film that spawned Vince Vaughn's career, this is a great ensemble cast with real comic timing, including pre-pounds Favreau, and Office Space's Ron Livingston.

The film is about an insecure comedian/actor named Mike (Jon Favreau) who is trying to get over a previous relationship. His best friend Trent (Vince Vaughn), a charming producer who lives vivaciously, enjoys going to clubs and getting women. Trent, Rob (Ron Livingston) and Sue find ways to cheer Mike up because of his current state. They go thru different adventures and test each otherâs friendship. Mike eventually meets a person he can easily get along with, Lorraine (Heather Graham). They met at a bar and then Trent becomes ecstatic of his friends transformation. The movie back then had a low budget of $250,000, but earned $5,000,000 worldwide according to the interview on the special features. The director and staff didnât have enough sleep and was able to use Betamax, …

Great comedy with dialog that is true to life

Swingers is the great transformation of two friends, Trent who has always been the ?Cool? guy and Mike who is the looser. Mike, John Favreau, is feeling desperate and pitiful after breaking up with his girlfriend of six year. Six months has passed and he is still obsessing over her and Trent, Vince Vaughn, is trying to get him to have fun being single by taking him to Vegas and picking up cute ?honeys?.

As the movie goes on their transformation becomes apparent: Trent may be cool on the surface but he is really the looser and Mike is the cool one. This transformation or realization is subtle that it is easy to miss if you haven?t been in either of their situations before. Unfortunately, most people have been in Mike?s situation before and it is easy to relate to him even if he is the …

Favorite Movies That Take Place in Las Vegas by The WHB

No posts have been made on this movie yet. Be the first to start talking about Swingers!