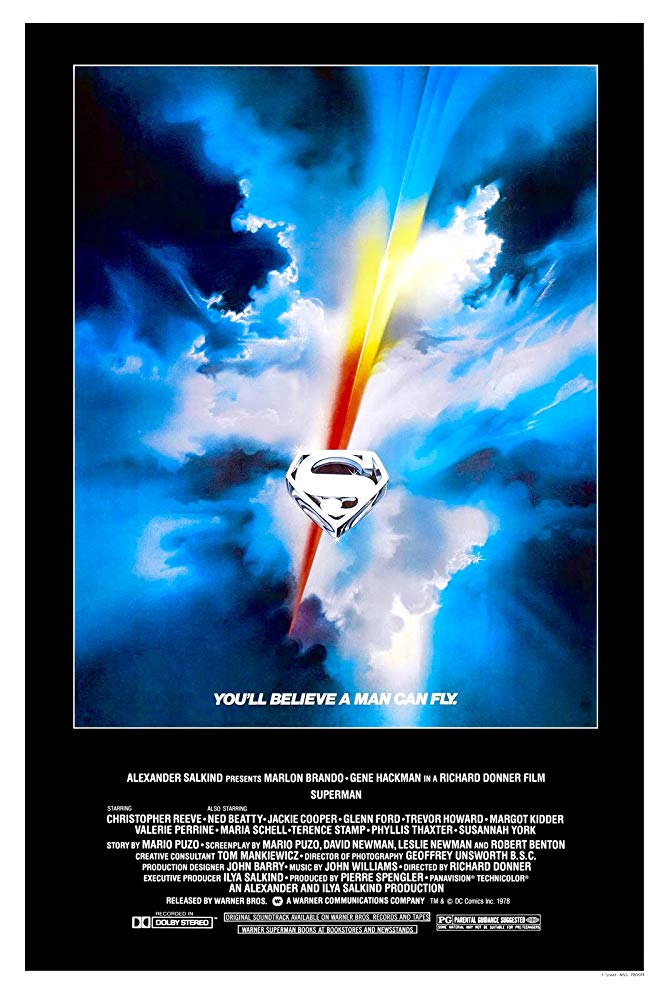 Plot: The story of an outsider from another planet who has Jesus like abilities - based on the comic of the same name.

Richard Donner's 1978 film version of the Man of Steel is a cinematic marvel, even if it sometimes feels a little corny or outdated.

Superman (1978 film) still remains as the best Superman movie ever made. The visual effects may be dated today, but I still find some scenes visually impressive and it uses the CGI very well. Christopher Reeve is fantastic as Superman, because he made the character his own while respecting the source material to the character. Oh and let's not forget about John Williams amazing score.

Superman is Still the best Superman movie ever made.

Richard Donner's epic-sized treatment of the big blue boy scout has aged surprisingly well since 1978 though it still has some flaws that reveal its age in some instances.
Produced when no one ever believed a comic book movie would be a hit let alone successful (Que Nelson's laugh) Donner does a bang-up good job while Christopher Reeve embodies all the charm, kindness, and all-around decency that people would expect from his iconic character. The supporting cast is what makes it watchable after all these years with the likes of Margot Kidder, Jackie Cooper, Glenn Ford, Gene Hackman, and Marlon f**king Brando giving great performances as classic characters like Lois Lane, Perry White, Jonathan Kent, Lex Luthor, and Jor-El.
My one complaint is that the bulk of the conflict stems from …

"Superman: The Movie" by Yojimbo

A child sent to Earth from a doomed alien planet grows to develop astonishing powers that he learns to use to help humanity. The original Superman movie stars Christopher Reeve as the man of steel and his portrayal as a humble, affable man of the people works particularly well both as square-jawed all American hero and his good intentioned but bumbling alter ego. Gene Hackman is also very watchable as the exasperated egomaniac against whom he is pitted and John Williams' iconic score is suitably rousing. The chemistry between Reeve and Margot Kidder does not work quite so well, she coming across as bossy and annoyingly self-involved and the "can you read my mind" date sequence is embarrassingly corny. It's biggest shortcoming however is in its woeful lack of a sense of spectacle; the …

Jor-El believes that planet Krypton will explode so he launches a spacecraft with his son Kal-El towards Earth. Jonathan and Martha Kent adopts the child and names them Clark. He becomes a reporter and falls for Lois Lane. Reeves just makes you believe in the hero's sincerity, Hackman as Luthor could have been realistic if he became bald. The light plot but action sequences were decent.

In the words of the fatherly Jor-El - "All that I have, all that I've learned, everything I feel... all this, and more I... I bequeath you, my son. You will carry me inside you... all the days of your life." The effects maybe dated but the themes of love, heroism, acceptance, family and bravery always persist. Its score is immortal and cinematography gorgeous. Superman was a good superhero …

No posts have been made on this movie yet. Be the first to start talking about Superman!