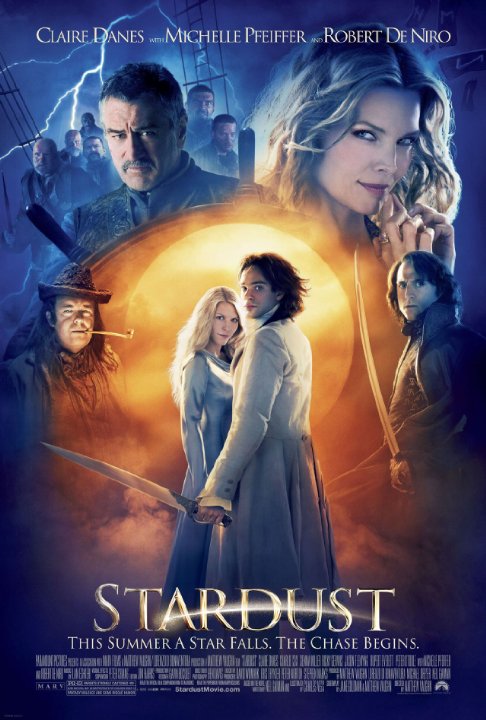 Plot: Based on the best-selling graphic novel by Neil Gaiman and Charles Vess. A young man promises to retrieve a fallen star for his love. He must travel to a magical land full of adventures.

'Stardust' is a light and fluffy fantasy along the lines of a 'Princess Bride' type. The plot is pleasantly simple and straight-forward. A bevy of varied characters show up in rapid succession. All of them revel in, while simultaneously subverting, their fairy tale archetypes. Usual expected situations have a familiar set-up, only to take a somewhat surprising turn. Even though these moments exist, the film is still confined to an average genre story. The hero and his eventual lover stay safely in those standards, as well. Left a bit more for me to desire. As a whole, it's a breezy fun watch. An easygoing good time.

A movie that people liked but I hate it.

Matthew Vaughn is a talented director and he has a talented cast at his disposal in telling this entertaining adventure story. The film has a definite "Princess Bride" attitude to it - a mixture of visuals and action-adventure style fight scenes and sarcastic and witty humor. Robert De Niro is the scene-stealer for me, in a role that is reminiscent of the crazy character he played in Gilliam's Brazil - so far out of the Bobby De Niro box that it's a fun and fresh departure for the actor. In all, I definitely went in expecting a by-the-books costume adventure and came out enjoying the movie a great deal.

A young man enters a magical kingdom concealed within the wilds of Victorian England and stumbles upon a fallen star pursued by a centuries old witch intent on stealing her youth, beauty and everlasting life. Stardust is based upon a graphic novel by Neil Gaiman and so features his usual off beat mix of quirky characters and English eccentricities. Very much hoping to be a modern day Princess Bride, this post modern fairy tale lacks its incisive wit but is not without its charms. Clearly influenced by the Narnia adventures of C.S. Lewis, the magical kingdom is not entirely convincingly realised but the stellar cast of kooky characters - including Robert De Niro as a cross-dressing pirate captain, Michelle Pfeiffer as the wicked witch, Mark Strong as a ruthless crown prince and a host of …

It is important, if one enjoys the art of film, to occasionally see an awful movie. This gives balance to your opinion, gives you an idea of what truly bad cinema looks like, and provides some wonderful unintentional laughs. I say this because it's one of the few good things about Stardust. It will give one a much better appreciation for better films, and even mediocre films.

Stardust is about a shooting star that has landed on (presumably) earth. It turns out, the star is actually a person named Yvaine. The main character, Tristan, finds Yvaine, and wants to bring Yvaine home to his girlfriend to win her hand in marriage. He does not know, however, that there are other forces that want the star very badly, and will kill to get it.

There's more to the story than that, but the …

Young Tristan (Charlie Cox) wants to impress the woman he loves, the beautiful Victoria (Sienna Miller). He promises to go and find her the falling star they have both seen and to bring it to her for her birthday and he has a week to do just that. Little does he know that the star is not a star at all, but a celestial beauty named Yvaine (Claire Danes) and that a greedy witch and the King's feuding sons are also after her with sinister intentions. Tristan pledges allegiance to protect the lovely Yvaine from the evil forces.

Michelle Pfeiffer is wickedly delightful as Lamia, the evil witch whoâs trying to steal Yvaine's youth and Robert De Niro gives one of his funniest performances ever as a gay pirate.
.
There's a certain charm this film possesses, and I found myself transported …

No posts have been made on this movie yet. Be the first to start talking about Stardust!