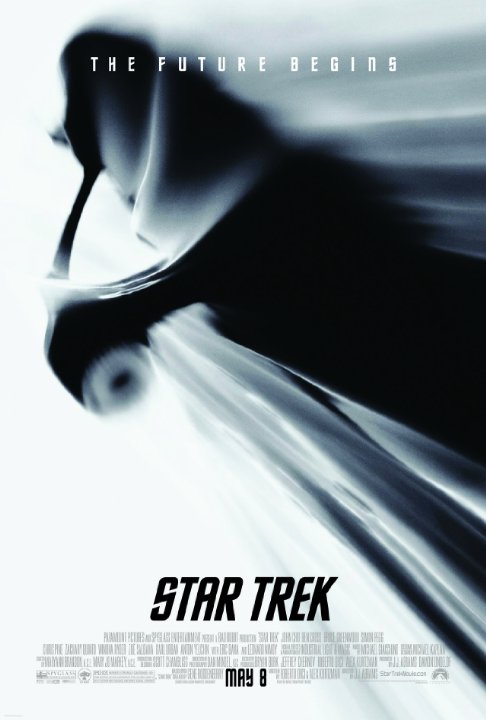 Plot: Chronicles the origins of the Enterprise, including a headstrong Iowa farm boy, James T. Kirk and a half-Vulcan coming to terms with his heritage, Spock. When a threat appears that has plans to destroy the future, the young crew must come together to avert disaster.

This movie was like star wars and star trek put together.This movie was the best summer movie of 2009, I mean the visual effect's was good and the characters are well played.

Made me a Star Trek fan.

J.J. Abrams brings his sure hand to the Star Trek franchise, resulting in a rejuvenated and exciting film that plays homages to the series, while blazing new trails. The cast (as a young Enterprise crew) is fantastic and, true to Abrams-form, three-dimensional, never taking back seat to the action sequences. Avoids the dragginess of previous Star Trek sequels and is a promising beginning to a new franchise.

The beginning of this movie may have been the 10 minutes that changed the Trekkie universe forever. With the death of James Kirk's father George, there opened up a door to a whole new universe for director J.J Abrams to work with. Chris Pine's performance as the captain of the U.S.S Enterprise was one to be respected but not adored. His wit and disregard for authority made him a very interesting character to get behind. The future Romulan antagonist played by one Eric Bana was a respectable villain but the performance felt a little flat. However it was a huge step up from his performances in Troy and The Hulk. The crew of the enterprise were all well suited for their roles. Anton Yelchin(Charlie Bartlett, Charlie Bartlett) Zoe Sadana(Natiri,Avatar), Simon Pegg(Shaun, Shaun of the Dead), …

Star Trek is the story of James T. Kirk and Spock, two seemingly unconnected beings, that find their stories intertwined when both find themselves aboard the USS Enterprise in order to battle the story's villain, Nero, who threatens to destroy many plants in a dramatic act of vengeance.

There's so much that works in this movie, it's hard to know where to start. The action scenes are always fun. Even suspenseful at times, Star Trek boasts a perfect blend of space flights and individual combat. But the key here is that Star …

The classic 60s TV series gets a big budget re-boot and sees the original crew of the starship Enterprise come together for the first time. I was actually looking forward to this film as I grew up with Shatner and co and thought the time was right, especially considering the success of the BBCs recent re-boot of the British equivalent, Doctor Who. In fact a few years previously, Doctor Who went through a similar process starring Paul McGann, but this project was in retrospect a total misfire; although McGann made a perfectly adequate Doctor, the whole approach was wrong. Instead of trying to capture the essence of the show, it uneasily combined a load of hardcore fan-pleasing yet irrelevant continuity and dumbed down kiddie-pleasing action and special effects and it just didn't work. …

Untitled Star Trek SequelHopefully this series will continue in the right direction.

Just saw it and so far it is the best movie of the summer...

Will this become bigger than Wolverine?&amp;nbsp; Everyone hear seems to think it is better.

Saw the new trailer.&amp;nbsp; I have to admit that it was good to hear the &quot;red alert&quot; noise that relays evidence of Star Trek.&amp;nbsp; It looks like it could be decent.&amp;nbsp; I am not a fan of child actors, so hopefully the children won't last long on the big screen.&amp;nbsp; It too could be too much of a action flick and leave behind what made the series so incredible all of these years.&amp;nbsp; They pushed the release date to next year some time.&amp;nbsp; I hope that is a good thing.