Harry Potter and the Super-Nap

It focused on the trivial …

I've heard that there's a bit of a conflict between the viewers, some say this is the best Harry Potter film yet, some say they were disappointed. I personally, am under the first group. Unless you can't fathom where this movie's existence came from, it's based on the sixth book in the Harry Potter book franchise. David Yates' directing makes cuts from the book, but manages to keep the more important parts in. The end result is a very emotional and dark adaptation, much like the book itself. This is what I like about these series, they gradually become darker, and more grounded in reality, and it shows the characters being able to deal with the situation. Another thing I liked was that Michael Gambon has gotten quite better as Dumbeldore since Prisoner of Azkaban. He's only going to be …

I like the Harry Potter films, and I love the books. The 1st and 2nd movies were fun family affairs, the 3rd and best was a kids film with great visuals and an intelligence the first movies did not have. The 4th was an epic but wasn't exciting enough, and the 5th was a better movie than the book. Now the 6th, and possibly the least exciting book in the series sadly translates into the least exciting of the films. Its okay, its nice, and the actors are growing both physically and with their talent but its all sort of one note being played for 2 and a half hours. I'm incredibly disappointed with the ending as it was the best section of the book which they somehow botched making the movie. Here's hoping the final two films pick up the momentum. 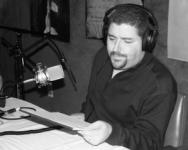 copy and paste the following link to hear the audio podcast of this review:
http://www.box.net/shared/static/ojrl7m6y06.mp3

Rated PG â scary images, some violence, language, mild sensuality
Starring Daniel Radcliffe, Michael Gambon, Helena Bonham Carter, Emma Watson, Rupert Grint
Dir by David Yates (who directed The Order of the Phoenix and is currently directing the next two potter filmsâ¦I said the next two basically because itâs easier to put Bradâs Mom on a diet than to squeeze a 3 pound book into a 2 hour movie

After a year and a half wait, Harry Potter fans in sold out theaters everywhere eagerly welcomed back the âChosen Oneâ and his magical crew in this legendary saga about good vs. evil.
I am personally glad that I had a nice tub of buttery-salted popcorn …

I reluctantly give this 3 stars, because the film is great, but having read all of the books (this being my favorite) it's an absolute abomination. My wife, who went with me and has not read the book got confused and lost, not what a good film should do. I have two major complaints 1) Where is all of the back story behind the life of Tom Riddle, you need this. In fact, a majority of the book was spent on this. To truly defeat your enemy, you must know your enemy. 2) As in the previous installment, it's titled "Half-Blood Prince" so, let's basically not search for him. Two small scenes are devoted to figuring out who this is before it's just blatantly told to you. As a film goer, this is a good movie, but as a Harry Potter fan, it's ok.

Harry Potter and the Ultimate Fail of Yates

After the Half-Blood Prince was murdered for me via big screen (thank you director David Yates), I came home and quickly logged on to the internet. Surely there would be Harry Potter fans whose feathers had been ruffled as much as mine; but no. Not only did they like it, some of them even defended the movie. …

Prince is King in My Book

Watching the complete Potter series from Sorcerer's Stone to Order of the Phoenix recently, it really is amazing how much the actors have grown. And unlike many young stars, they've kept themselves out of trouble and proved they can mature in their art as they get older.

Half-Blood Prince is not just the next chapter in a beloved series, it's a culmination of many years of growth, working together (and the chemistry does show) and as it stands, is the best movie in the series thus far.

If Order of the Phoenix was the Potter's angst-ridden teenage saga, then Half-Blood Prince is the relationship-driven teenage saga. Especially fun is the Ron/Lavender/Hermione triangle - out of all the younger actors, Emma Watson really gave a standout performance this time around whether she was …

I wouldn't say this was a victory it was more of a candy coated illusion of a victory rather than a victory itself. Sure the effects were top notch but the problem I had with it was there were so many unnecessary scenes. And having too much going on would most definitely overshadow the very essence of the story it was trying to tell. Halfway through it I kinda felt lost. No I have not read the book but have been following the film's franchise since the beginning and it just made me think why are they making a more effects driven movie(remember Transformers 2) rather than a more deeply compelling storyline which audiences would appreciate more. One could only wish that film gods would listen. By the way there was this one and only scene I would probably remember about this movie and it …

Another Victory for "The Chosen One"

I usually don't like to comment on Harry Potter films because there is simply just too much to say. However, I will add in my two cents for this one. I thought the actors were incredible. They have all grown into their characters really well. They've had it down since the beginning really, but this film was just something different. I must say in the books I hated the idea of Ron and Hermione being together. It made me want to vomit, but watching the outpour of emotion on screen just brought their relationship to a whole different light and I was rooting for Ron and Hermione all the way.

Now as for the film itself (sigh). Let me preface this by saying that J.K. Rowling writes incredibly long stories and it would require entirely too many resources to try and transfer all of her work …