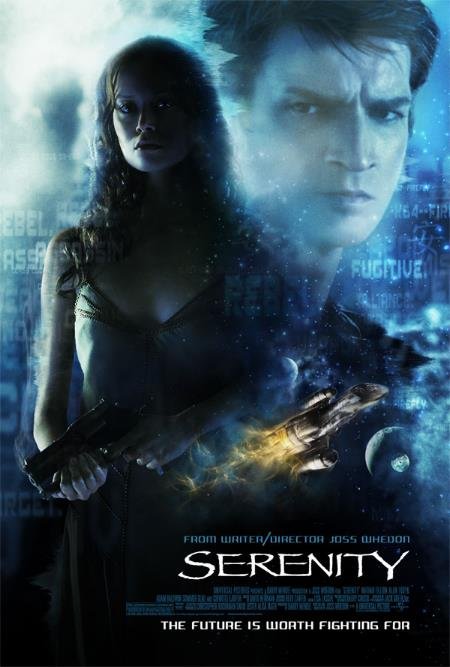 Plot: The crew of the Serenity harbors two fugitives from the Alliance - one of whom holds a secret that could bring the Alliance to its knees.

The crew are back but this time it's a movie not a TV series. The directing and the characters are the best part of this movie but am not a fan of firefly if I have to be honest so I thought this movie was alright.

As someone who had never watched a single episode of Firefly before seeing Serenity, I was refreshed by the combination of a solid sci-fi film with Whedon's signature humor-filled, gleeful directing style. The film is exciting throughout and a fun ride, even for those unfamiliar with the source material.

ok i saw this before i saw the actual series (firefly) and i thought i'd give it 6/10. but on a second viewing and especially after i saw firefly, it was a pure delight watching this movie. i hated to see wash die though..

I think having seen 'Firefly' beforehand did help with my viewing experience. The film does manage to stand on it's own despite a weak start. It runs through world building, character history, and general explanations in rapid delivery right from the beginning. The first half is jumbled because of this. It's hard to get a feel on the overall tone when all the scenes are short and quickly edited, jumping around to multiple locations while sounding off much exposition dialogue. It was a bit hard to follow for me, and I had the events of 'Firefly' still fresh in mind. The second half is much more smooth and very engaging. The main plot takes center focus and the characters shine in fun ways. The natural essence of what made the original show great becomes more apparent with …

Serenity Sucks. There I said it.

There are a few things that fanboys, geeks, nerds, and similar groups of like-minded social outcasts must understand and accept. One of them is the plain and simple fact that even though Firefly was an awesome tv series, the movie that Joss Whedon made as a continuation was just terrible. I'm gonna get assassinated for saying this probably but Serenity is a terrible movie.
Newcomers would be confused as **** by the writing and the mythology of the series. The central conflict of the film emerges in the third act and afterwards, all the characters act like this was what the movie was about when it was clearly just a bunch of actors confined to a spaceship for sixty minutes.
Granted, the villain is awesome and becomes the most memorable aspect of an otherwise mediocre film which does …

A mixture of humor, horror, drama, western, action and sci-fi all rolled into one package. This type of picture smiply gets better as you view this from the very first scenes. It boils down to this message from the flick - "We meant it for the bestâ¦ to make people safer." and yet detrimental effects occur. Malcolm "Mal" (Nathan Fillion) is the Captain of Serenity, where his team consists of Zoe (Gina Torres), pilot Hoban "Wash" (Alan Tudyk), Inara (Morena Baccarin), weapons expert Jayne (Adam Baldwin), mechanic Kaylee (Jewel Staite), doctor Simon (Sean Maher) and his psychic sister River (Summer Glau). Only minor gripes would be the lack of character development/participation of Inara and better special effects in certain scenes, but doesn't necessarily affect the picture. …

No posts have been made on this movie yet. Be the first to start talking about Serenity!