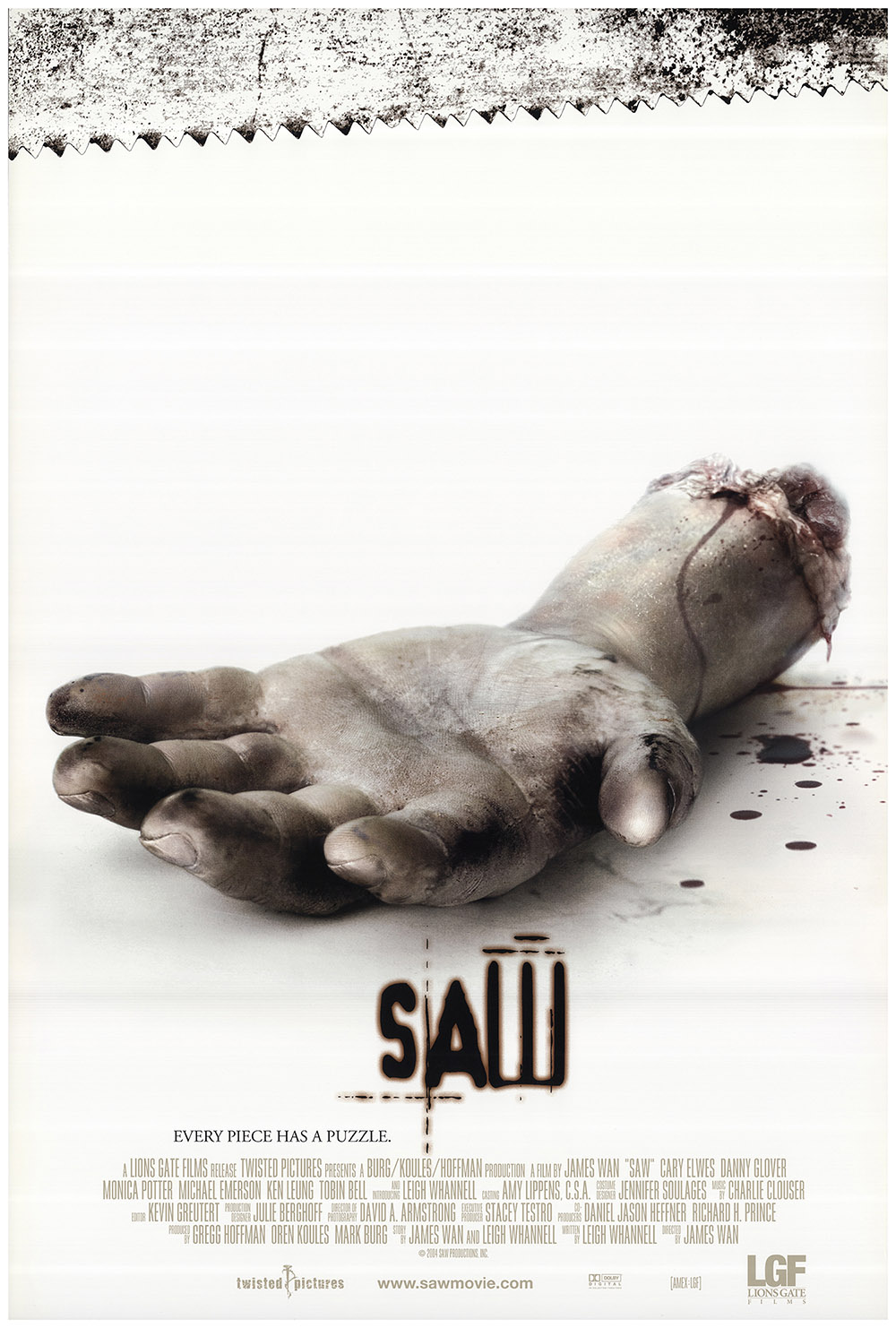 Plot: Two men wake up in a dingy bathroom, chained to the floor. They are the newest victims of Jigsaw, a serial killer who sets elaborate traps to prove a point.

Well written, directed, and acted, the original "Saw" is unfortunately tainted by its series of unimpressive sequels.

The story is about Two men wake up in a dingy bathroom, chained to the floor. They are the newest victims of Jigsaw, a serial killer who sets elaborate traps to prove a point. This horror movie has a chilling and a ugly look to this movie and I mean about that in a good way. Jigsaw is the greatest horror character in any other horror movies.

Before it disintegrated into a mindless franchise, the first Saw film is a well-made, slow-building horror mindtrip that plays on feelings of paranoia and claustrophobia. The cast is the best of the assembled Saw films - including the brilliant duo of Elwes and Glover, who play off each other well.

Two strangers wake to find themselves chained up in an unknown location to be told if one does not kill the other before six o'clock, his family will be killed. This highly derivative serial killer movie has many plot devices that will be familiar to anyone who has seen Cube, Seven or Phone Booth, but it has clearly influenced the makers of TV crime drama from CSI onward. I have to say, if you watch it with a sense of humour, it does amuse. It has a Hammer Horror silliness that I quite liked; the masks, the puppet, and I could even see Cary Elwes' stiff upper lipped doctor being played by Peter Cushing at another time. I also did not see the twist coming, but mainly because it was so absurd, rather than clever (like a trained surgeon wouldn't have noticed!) Taken seriously, it's just a …

Adam (Leigh Whannell) and a Dr. Lawrence (Cary Elwes) are chained and a corpse in between them. Both were given a key and tape. In a flashback scene, Detectives David Tapp (Danny Glover) and Steven Sing (Ken Leung) discover a tape recorder from Jigsaw âJohn.â Both of them visit Dr. Lawrence since his pen was on the crime scene and interviews the other people that are connected with the gruesome case. Some key lines: Jigsaw â âMost people are so ungrateful to be alive.â âI'm sick of people who don't appreciate their blessings.â Zep â âHe's a very interesting person. His name's John.â âItâs the rules.â

Screenplay was excellent for a horror film. The artists were believable and the premise clever and groundbreaking. The score and soundtrack was …

The only movie in the series I liked. I find the Saw movies extremely overated, especially all the sequals, but I have to say, this was the best in the series. However, the best thing about this movie is Cary Elwes's performance. He was great. I enjoyed this movie very much when I firs saw it, but it really was the undeserved hype that killed it. And the shit-tastic sequels. This could have been a good series, with the potential of making the horror franchise what it once was from the '70's to the '90's. However, it fell short, and horror movies continued on that downhill slide which began in 2002 which some like to call a "renaisance". Bullshit. Basically, watch the first one, but don't bother with the sequels. Personally, I prefer a good Troma film.

No posts have been made on this movie yet. Be the first to start talking about Saw!