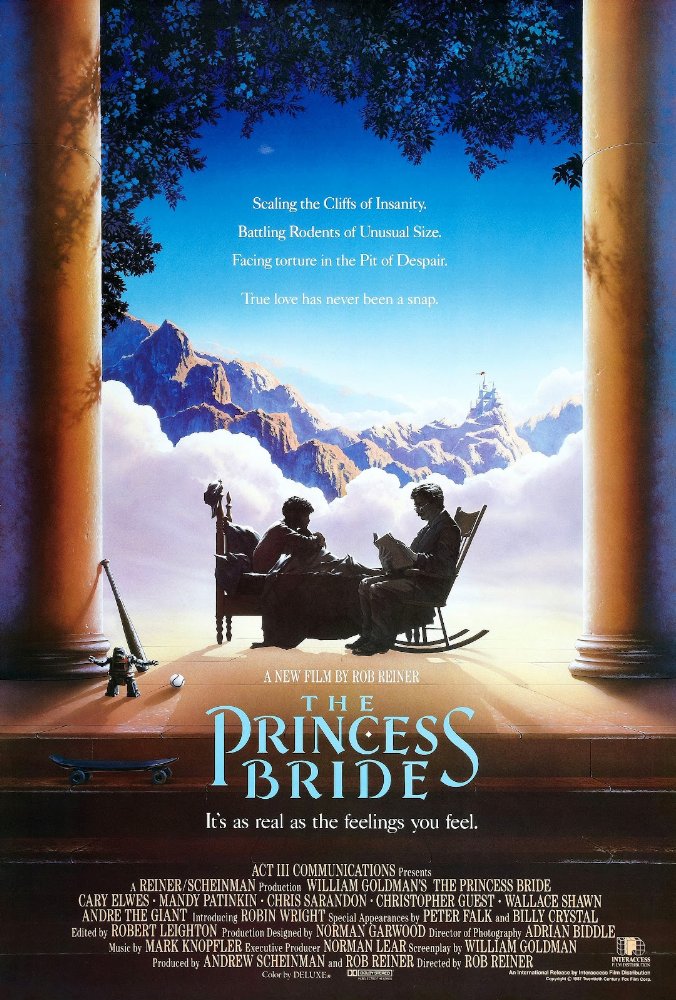 Plot: Wesley, a peasant, goes on a fantastic journey to find his love, the soon-to-be princess Buttercup. A comedic fairytale like no other.

"Life is pain, Highness. Anyone who says differently is selling something." Would you guys believe me if I told you that I havenât seen The Princess Bride until now. For years I was surrounded by people who would reference this regularly and man I was so confused. And yes, every iconic scene and quotes flew over my head. But not anymore. I've seen it...I liked it a lot. Feels great to join the club.

Similar to Monty Python and "Labyrinth," "The Princess Bride" is enchanting and fun.

What a wonderful film. It features great acting and Rob Reiner really has a great touch. He makes this fun for all ages, yet also enjoyable enough for adults. Everything about this film is memorable, the characters, the quotes...oh the quotes, there are too many to list. And I love the plot device of having Peter Falk reading to Fred Savage, that way, we don't have to suspend are belief that this is or isn't really happening, it's already a made-up story...and remember: "Never go in against a Sicilian when death is on the line"

When you mix pirates, sword wielding Spaniards, good-natured giants, evil masterminds, six-fingered counts, and the Cliffs of Despair what do you get?

The main story is in fact a story within a story; a grandfather, played by Peter 'Columbo' Falk, visits his sick grandson Fred Savage and reads him a tale about a young princess, Buttercup (Robin Wright) and her servant Wesley, played to perfection by Cary Elwes. We see her treating him quite heartlessly but as time goes on, we see her fall in love with the handsome young farmhand who has loved her from the beginning.

Wesley decides he must leave Buttercup to pursue his fortune so he may provide a life for her. He leaves and is not heard from again, and is believed to be killed at the hands of the infamous Dread Pirate Roberts. …

"The Princess Bride" by Yojimbo

This charming post-modern fairytale was adapted by William Goldman from his own book, and it's the witty script crammed with knowing humour and likeable characters that makes it. Technically, it really isn't that great; the direction from Rob Reiner is flat and lacklustre as he clearly has no idea how to handle action. The score is also appalling; it sounds like someone was just making it up as they went on an 80s home organ. But there are so many funny, quotable lines and fun characters it hardly matters. Cary Elwes is as wooden as ever, but it works in the context as he is a virtual parody of a smug swashbuckling hero very much in the vein of Errol Flynn. The fantastic supporting cast are all great as well, including Peter Falk, Billy Crystal, Christopher Guest as the foppish villain, …

It starts with a sick boy (Fred Savage) and his caring grandfather (Peter Falk) who reads a novel to him. Main characters include a loyal farmhand Westley (Cary Elwes) and a beautiful girl named Buttercup (Robin Wright). Before the wedding of Buttercup and Prince Humperdinck (Chris Sarandon), she was abducted by Vizzini (Wallace Shawn), a Spanish fencing extraordinaire named Inigo Montoya (Mandy Patinkin) and a gentle giant named Fezzik (AndrÃ© the Giant). Inigo vows to avenge his fatherâs death by the malevolent six-fingered Count Rugen (Christopher Guest). He asks assistance from Miracle Max (Billy Crystal) to revive the dead Westly. Some memorable lines: Westley â âWe are men of action, lies do not become us.â âLife is pain, Highness. Anyone who says differently is …

No posts have been made on this movie yet. Be the first to start talking about The Princess Bride!