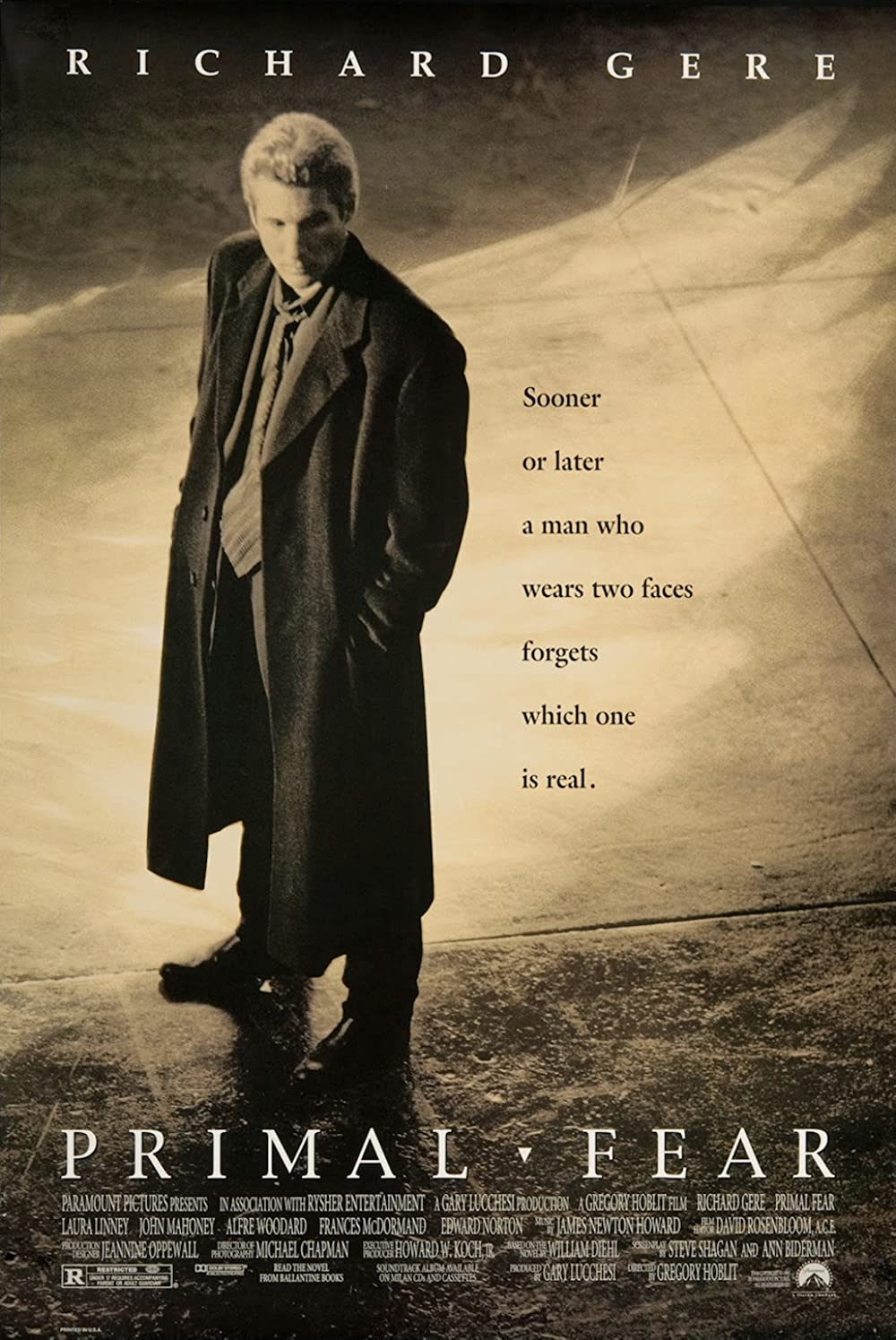 Plot: A powerful, hotshot defense attorney takes on a case of a altar boy accused of murdering a respected Catholic archbishop who cared for him.

A substantial courtroom drama, "Primal Fear" thoroughly breaks down aspects of mental illness and the legal process, and ultimately ends on an epic twist.

Entertaining characters and dialogue populate this streamlined courtroom thriller. It takes many interesting turns. I could foresee the inevitable final twist from the beginning, but that didn't make it any less enjoyable. The sinister revelation wouldn't have worked without Norton's superbly layered performance.

It's a crime that Edward Norton didn't win an Oscar for his two-faced portrayal that absolutely makes this film more than an otherwise standard legal thriller. The much talked about twist at the end never would have worked without Norton's nuanced and convincing supporting character. Sticks with you for a long time afterward.

First off, what on earth is with that appalling title?! It sounds like a straight to DVD Van Damme movie about dinosaurs or something...In reality it's yet another ho-hum courtroom drama in which Richard Gere plays a defense attorney who used to be a prosecutor (*sigh*) who is defending altar boy Edward Norton, accused of brutally murdering an archbishop. To add "spice" he is up against prosecutor Laura Linney, his ex-girlfriend (*double sigh*) who utters lines like "It was a one night stand Marty, it just lasted six months." (*triple sigh/cringe*). Yes, all the cliches are in effect; every courtroom scene is stuffed with the usual "You are in contempt!"/"I will not have grandstanding in my courtroom!"/"Strike the witness' testimony from the record!" etc etc etc and the so-called twist …

A bishop was brutally murdered in his luxurious apartment in Chicago and the police made an instant arrest, after chasing down a blood-soaked young man named Aaron Stampler who was found hiding near the scene of the crime. Martin Vail, a cynical defense attorney, takes on Aaron's case pro bono in order to boost his reputation. He and his team find themselves racing against time and against all odds to gather evidence of Aaron's past and build a plausible defense scenario, but as the story unravels and they delve deeper into the innermost thoughts of a disturbed mind, they realize that not all is as it seems.

If you became an Edward Norton fan because of Fight Club, American History X, or Red Dragon, then you should check his debut film out as he was absolutely stunning here as well.

Primal Fear tells the story of a seemingly harmless altar boy who is accused of murdering Chicago's most beloved archbishop. Big shot lawyer Martin Vail takes the case to prove his client's innocence, and ends up digging up clues that prove the archbishop wasn't so great. He also discovers that due to his client's repressed personality, he has developed a second, more brutal personality. Now the lawyer wants the insanity plea, and to prove that the archbishop brought on his own murder. This is an intense courtroom drama, and a very well made film that makes you think.This movie is one of the best courtroom dramas/thrillers out there. It is well made with a chilling plot and great dialogue. The style in which the film is made reminds me of the classic mystery/courtroom films, except with …

No posts have been made on this movie yet. Be the first to start talking about Primal Fear!