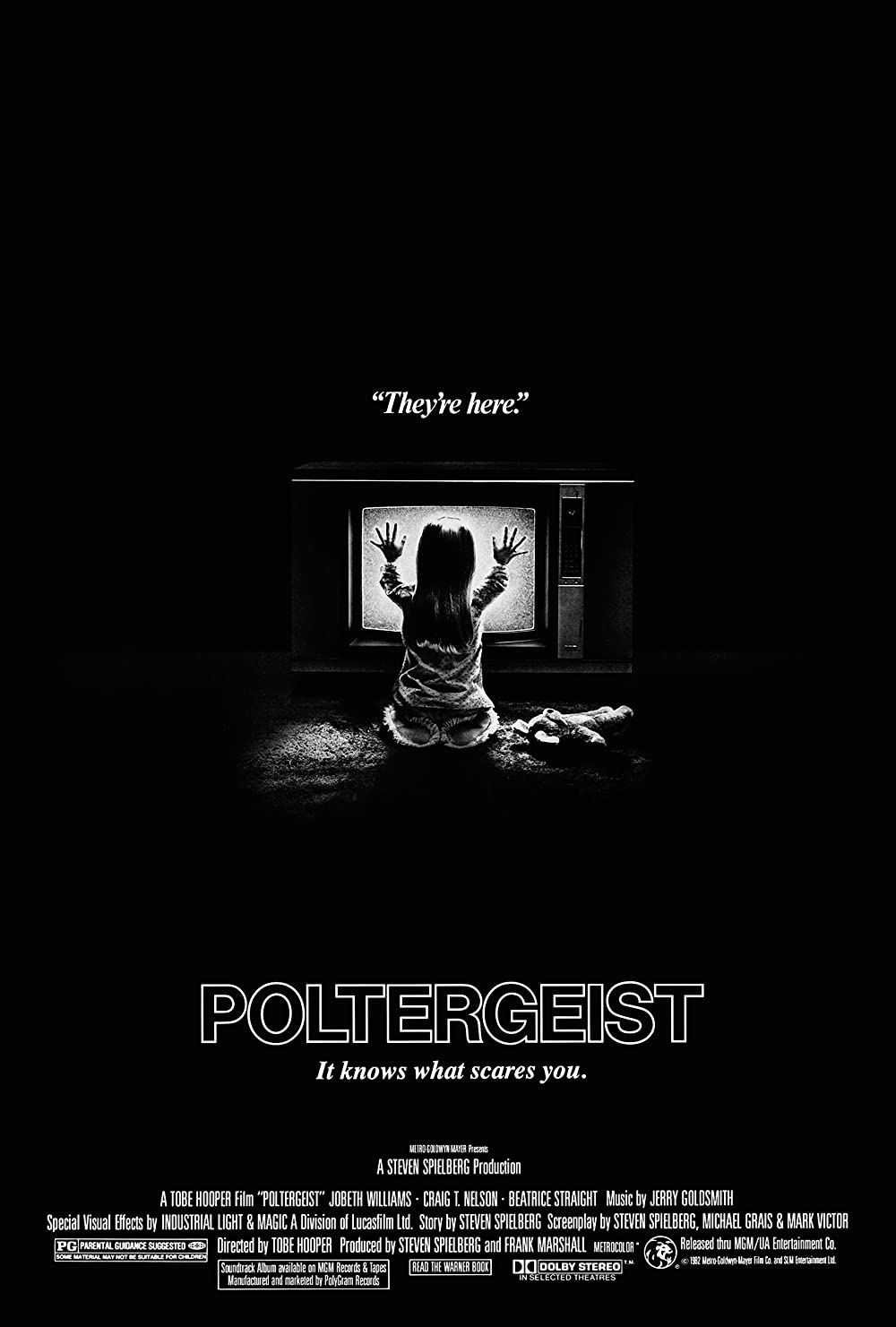 Plot: A typical suburban family is first amused, then terrorized as ghosts and other paranormal phenomena take over their home.

A spooky and engrossing horror story.

A horror movie that entertains more than it scare. That probably has more to do with having Steven Spielberg on as a producer than anything. I have a feeling if Tobe Hooper was the only one involved it would have been much scarier. The special effects are fantastic, I especially enjoyed the monster that they "pull" out of the closet and the bodies coming out of the ground. It's really a typical haunted house set-up, a house was built on top of a cemetery. Now the ghosts are pissed off and they want revenge. The twist is the television, which is a speaker of sorts to the underworld. Their son annoyed me, he should've been forever sqaushed in the tree. But Craig T. Nelson, as always is great.

Trick or treat's are here.

A suburban home is invaded by an evil presence which befriends the family's young daughter and draws her into its spirit realm. Although Tobe Hooper is credited as director of Poltergeist, producer Steven Spielberg's fingerprints are all over it. Hooper's pedigree within the cult horror fraternity as creator of The Texas Chainsaw Massacre is combined with Spielberg's consummate skill as entertainer to create a hybrid that contains many of the horror standards including living trees, evil clowns, self mutilation and corpses aplenty but maintains its mainstream crowd-pleasing sensibilities. It shares a lot of ingredients with Close Encounters Of The Third Kind but this snap shot of likeable suburban America is disturbed by something far less benevolent. The special effects have actually …

Steven and Diane Freeling live in a suburb with their kids Dana, Robbie, and Carol Anne. Carol Anne witnesses something spring out from the television. Screenplay was descent with quotes from Diane â âReach back into our past when you used to have an open mind, remember that? Now try to use that for the next couple of minutes.â Steve â âYou left the bodies and you only moved the headstones!â and the popular line from Carol Anne â âThey're Heeeeeeeeeeeere.â The acting and score were fantastic and the subjects of sacrificing for the family and respecting the dead were present. If only the effects were better, still it was recognized at that time by the Academy awards. Poltergeist has been emulated and copied as one of the best films of its genre.

In the seventies, Horror was the hot "genre" to make a film in. Musicals and family films were good fun but many people wanted danger and chills while watching a film that combines terror with fear. A combination most popular with The Texas Chain Saw Massacre. The films could be good fun but the plot was as threadbare as the acting. Poltergiest is a film that can appeal to many more people then simple horror movies. It is centred around a family of different ages. It starts pleasantly yet the youngest child Carol Anne talks unnaturally to a dead television screen. Slowly everything blends the music is Oscar worthy and brilliant for the mood. The setting is not isolated as such but the film is in two different worlds. The real life and the an in-between land of people wanting to move away …

Top 8 Horror films of the 1980's by Stoney McStonerson

No posts have been made on this movie yet. Be the first to start talking about Poltergeist!