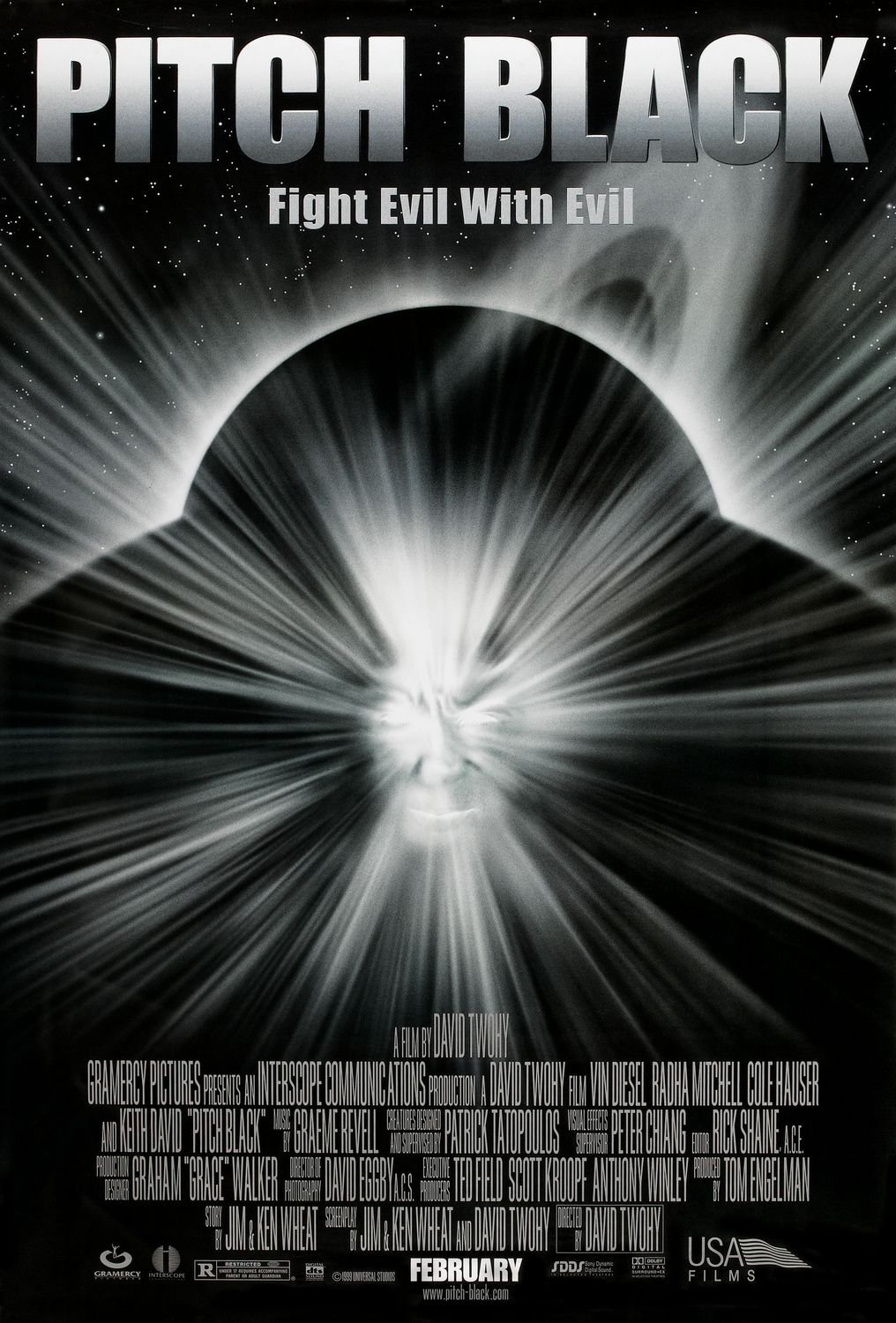 Plot: A deep space commuter vessel crashes onto an inhabited planet. The passengers must work as a team to survive this sun-scotched dessert planet and fight the creatures that live on it.

A original Sci-Fi that didn't flop at the box office.

This is the first and best of the series, full of simplicity and tension in a unique sci-fi world. Vin Diesel gives an understated performance here that conveys more emotion and intensity than in any of his future, more action-oriented roles.

The role that launched Vin Diesel into stardom, this science fiction thriller pits the interstellar outlaw Riddick and other spacefarers crash-land on a barren planet. They learn to their horror that the planet undergoes an eclipse that draws out deadly carnivorous aliens that hate sunlight. The survivors of the crash must rely on Riddick since he can see in the dark.
Not surprisingly, Vin Diesel is very good as the sardonic antihero Riddick. Half the supporting cast are just here to be eaten. But others like Radha Mitchell and Cole Houser and the ever reliable Keith David do fine.
What separates this film from other science fiction horror films is the moral ambiguity of its characters.After two sequels, some video games, and comics, Riddick is at his most compelling and dangerous …

Carolyn Fry (Radha Mitchell) informs her co-pilot, Greg Owens (Simon Burke) that the Captain is dead. They try to maneuver a crashing ship with people namely Paris (Lewis Fitz-Gerald), Shazza, Muslim Imam (Keith David), a young boy named Jack (Rhiana Griffith), Zeke (John Moore) and Johns (Cole Hauser) and Ali. Convict/murderer Richard B. Riddick (Vin Diesel) escapes. Zeke gets killed and they are susecting it was Riddick. Riddick tells Fry it wasn't him. Visual effects and set pieces were impressive. Screenplay had some sublimnal messages such as: "Trees mean water." "Watch your mouth." "Let's just stick to the deal."The creed is greed." "I was wrong. I admit." and "I would die for them." The scene between Imam and Riddick regading a God was somewhat ill-advised. Overall, Pitch …

The passengers on a space transport turn to a ruthless prisoner for help when their ship crash lands on a deserted planet inhabited by a swarm of flesh eating nocturnal creatures. Pitch Black is the film that was the stepping stone to stardom for Vin Diesel and here he perfected his laconic, amoral tough guy persona. His charismatic presence lifts the film above the crowd of low budget cult sci-fis out there and thanks to some creative and economical direction from David Twohy it cracks along with the appropriate tension and atmosphere required for this kind of thing to work. It clearly lifts a lot of ideas from the first two Alien films but it does it with a modicom of style despite some slightly dated looking SFX. The only serious flaw is that Radha Mitchell is a little lacking for a …

No posts have been made on this movie yet. Be the first to start talking about Pitch Black!