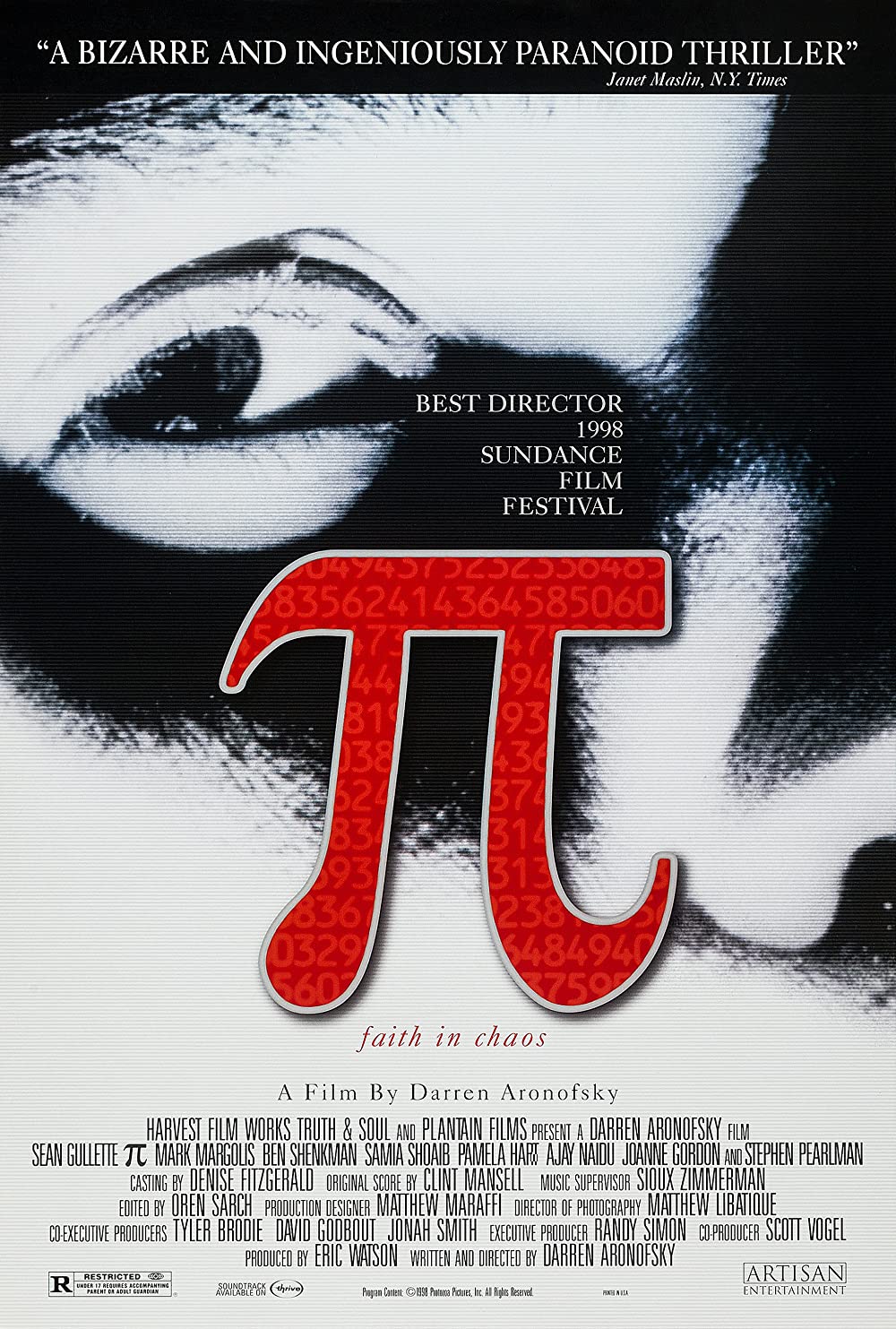 Plot: A paranoid, genius mathmatician thinks he has discovered the key to all the universal patterns in nature. Soon he is pursued by a Hasidic Jewish sect looking to decode the 216-digit number of God's true name to Wall Street brokers hoping to crack the stock market. What he decides to do with the knowledge is the true shocker.

About as bewildering and enigmatic as a single movie can be, "Pi" is a thriller with a true meaning that could be as complex as its plot, or as simple as the thought that there are answers in life we may never grasp.

Many cite this as a 'paranoia induced thriller'. There's no 'thrill' present. The main problem I had is the fact that the entire film revolves around numbers, math, statistics, patterns, etc. This makes a boring mess for someone who could care less about such things. Even though it's only 98 minutes in length, it felt twice as long while watching. 'Pi' is not particularly bad. I just didn't care for it at all.

Good film! This debut from Aronofsky is not his best, but it's certainly a clever little thriller even with its short running length and no-name cast.

Maximillian "Max" Cohen (Sean Gullette) is the narrator and math addict who theorizes about numbers. He interacts with his mentor Sol Robeson (Mark Margolis) while suffering from a lot of disorders such as headaches, paranoia, hallucinations, and social anxiety disorder. Lenny Meyer (Ben Shenkman) strikes a conversation with Max.

Its screenplay was wonderful with the quotes from Max â âThere are patterns everywhere in nature.â âI'm trying to understand our world. I don't deal with petty materialists like you.â Some of the theories were enthralling and logical. The score was upbeat much like the rest of the directors films and acting was sincere. Topics relating to mathematics, religion, fixations, illusions, being at peace and sense of reality were portrayed in Pi, a …

The worlds of religion and big business clash over the talents of a mathematics prodigy who becomes obsessed with finding a formula that can explain the underlying pattern of existence. Pi was Darren Aronofsky's debut film and is an experimental little affair that reminded me in a lot of ways of David Lynch's Eraserhead. It has the same grainy, black and white photography and surreal, almost nightmarish quality. It contains a lot of theoretical sounding scientific jargon, but to me it felt a bit more like new age hoodoo than genuine science making it far from the profound experience I was expecting. It's certainly an interesting film with some effective imagery and quality performances and shows the potential Aronofsky possessed in the field of film making. More a taster than a complete …

Pi is a number which has never been discovered to completion. Even computers have only rounded it to a few hundred decimal places. Similarly, there are other patterns with intial formulas that are not yet fully discovered: the stock market, numerology within religion.

The main figure here suffers as Icarus, who flew just close enough to the sun to crash and burn. He discovers an instance where his formula predicts the stcok market successfully and that's when special interest groups unravel his wings. Pi is tragic yet logistically very plausible. It is honest and is a fascinating take on those that aim too high.

No posts have been made on this movie yet. Be the first to start talking about Pi!