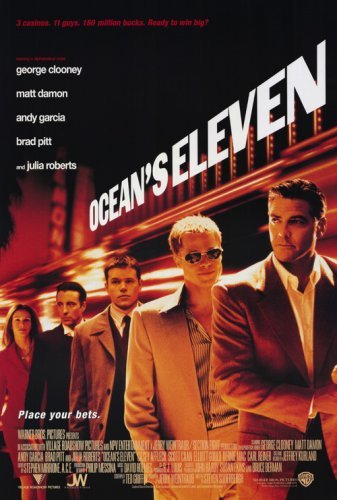 "Ocean's Eleven" is so entertaining, you don't care how unrealistic it is.

A movie based completely on dialogue, much like the Fast and Furious franchise. Example: "Well how do we break into the safe?" "Oh, I know this guy..." cuts to scene showing some expert the main characters played by Pitt and Clooney happen to now who just happen to have the skill they need... The film is composed solely of witty banter between the leads.

It does not help that all three of these movies were boring as hell but you know what made it worse? Their arrogance. The smugness of the cast and crew like they were making the best movie series ever. God, it was irritating and insulting to my intelligence and a lot of other people I'm sure. This one was the worst offender of the trilogy since aside from being responsible for its inception, Ocean's Eleven is so dull and slow. It's like a party is happening on your TV screen and you're not invited but they force you to watch the fun before your eyes.

Low on Logic, High on Entertainment

Danny Ocean has just gotten out of prison, and has no intentions of returning to society as a model citizen. Rather, he plans a heist to rob three of Vegas' biggest casinos and loot over 150 million dollars. Of course, this job is too big to do alone. Ocean get's 10 other recruits, for a total of eleven people, making this genius heist.

Ocean's Eleven would like to convince you that there's an emotional core to the film. In fact, there is, in the form of Ocean's ex-wife Tess, whom he is trying to win back. Alas, this romance …

I've never been able to shake the feeling that I'd done this star-studded caper movie a disservice when I first watched it, and as I watched Clooney and Pitt's great buddy partnership sparkle through the witty and stylish planning of their casino heist, I was convinced I was right. And then Julia Roberts hoved into view. It's not that she's completely dreadful, but she managed to muster absolutely zero chemistry, which considering she was paired with Mr. Sauve himself, is quite an achievement. The execution of the heist is also lacking the humour of the earlier part of the film and so looks like something out of Mission: Impossible. Add the niggles of Andy Garcia's characterless villain and Don Cheadle's painful mockney accent and I think 3 stars was fair after all. But it is an …

No posts have been made on this movie yet. Be the first to start talking about Ocean's Eleven!