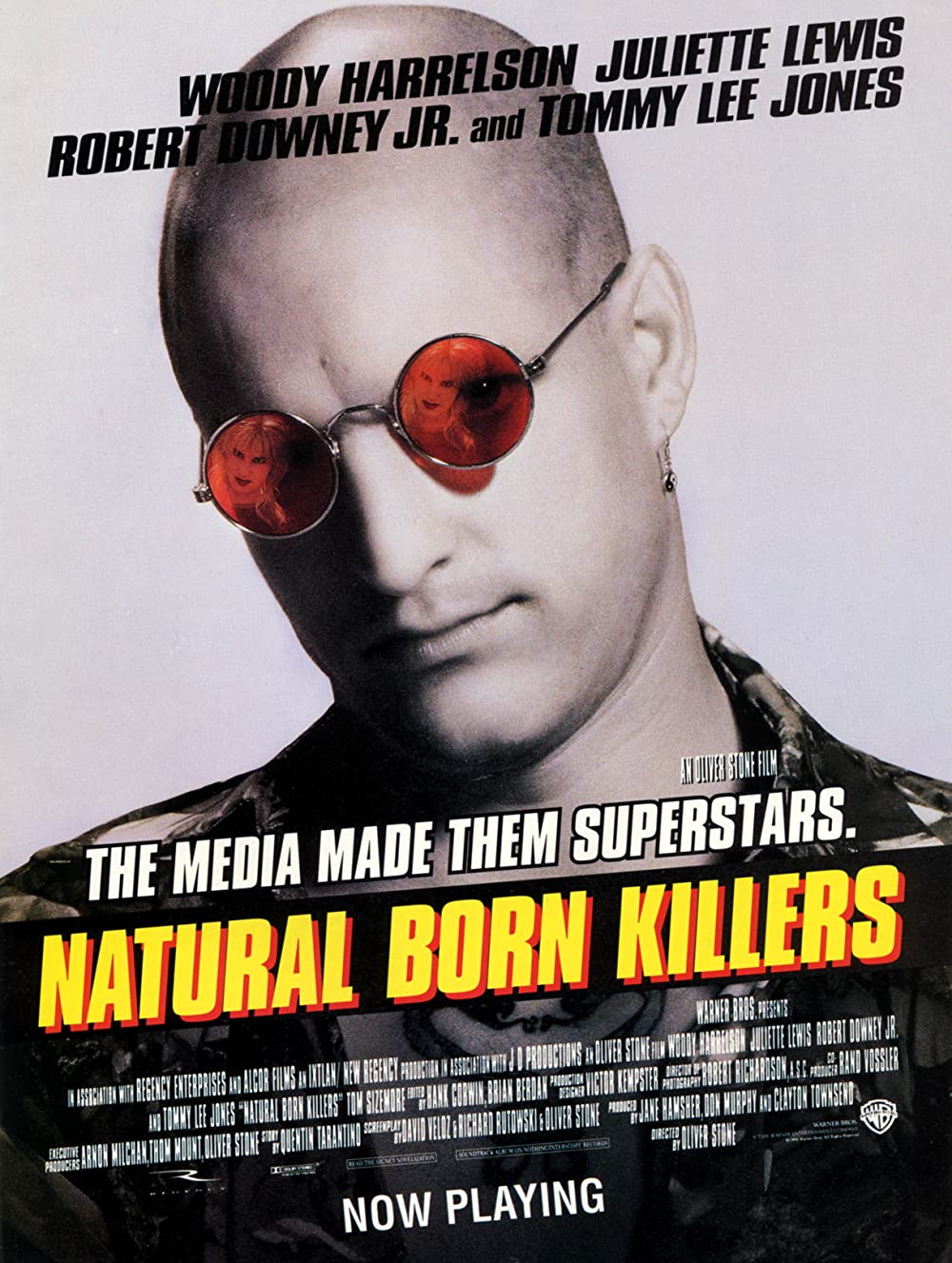 Plot: A serial killing pair who were victimized sexually as children fall in love, go on a rampage, and kill a lot of people as they run from police.

What's the most twisted movie you can think of. Now times it by 5 and you have "Natural Born Killers."

Mickey Knox: "Shit, man, I'm a natural born killer". The story is about a serial killing pair who were victimized sexually as children fall in love, go on a rampage, and kill a lot of people as they run from police. This movie is filled with crazy but amazing scenes with the weird imagery. The directing in this movie sharp and brilliant.Woody Harrelson and Juliette Lewis did really good in the film, but my favorite character in this film is Robert Downey Jr.

A film that meditates on the nature of violence in media, but, in so doing, is itself a grotesque and violent display. As with some other Stone works, it is hardly as subtle as it thinks it is and the same subject was tackled with much greater effect in an earlier film (one that Stone is obviously emulating) in Bonnie and Clyde. The cast is talented and Harrelson and Lewis are a formidable and scary criminal duo, but the film is too desperate to shock without backing it up with substance.

This is one of those films I've always felt I should've seen sooner. And now I have, I don't feel so guilty, because it really isn't all that good. It's essentially an audio-visual assault that feels like an MTV programmer's nightmare. Stone throws in everything INCLUDING the directorial kitchen sink, with little thought for narrative pacing or any measure of subtlety. The photography is garish and ugly, and the characters over-acted stereotypes. The stand out line of the film for me was "It's a statement. I'm not sure what about" because that pretty much sums up the film for me; it claims to be a statement about violence and it's glamorization in the media, but actually fails to make any coherent point on the subject. All tacky and superficial flash but no substance.

i hated this film and let me tell you why.mny people consider this to be eiher "great" or "controversial". "great"? I don't thik so. "controversial" yes. no heres why i hate this movie so much.originally quentin tarantino was going to direct this film himself,but then olver stone came in an ruined th whole script and turnd into a pile of shit.Tarantino's original screenplay was far more better and intelligant.if only Tarantino could have directed this.but overall i hated this film.it was pointless and boring.an was with the whole visuals in the background?,i was hard to pay attention to what characters were saying,when a damn figure just keeps popping up in the background.please comment below and tell me what you guys thought of this crappy film.

I have had so many different reactions to his film over the years. I hated it back when I saw it when i was 25 years old and I didn't care for it as the years went by, then, just over a year ago, I rediscovered a masterpiece . . .Oliver Stone is an outstanding filmmaker, because he takes risks and has a firm vision, doing things HIS way for all theses year, WITHIN the cynical studio system. From the beginning of his career, he's had the heat follow him, being unfairly tagged and bludgeoned, creating controversy at every turn. And "NBK" is no exception. In fact, I believe it's one of the most controversial films ever made, because it still has such a major effect on society today. It's being blamed for murder after murder, which completely confirms the film's message, that society is …

No posts have been made on this movie yet. Be the first to start talking about Natural Born Killers!