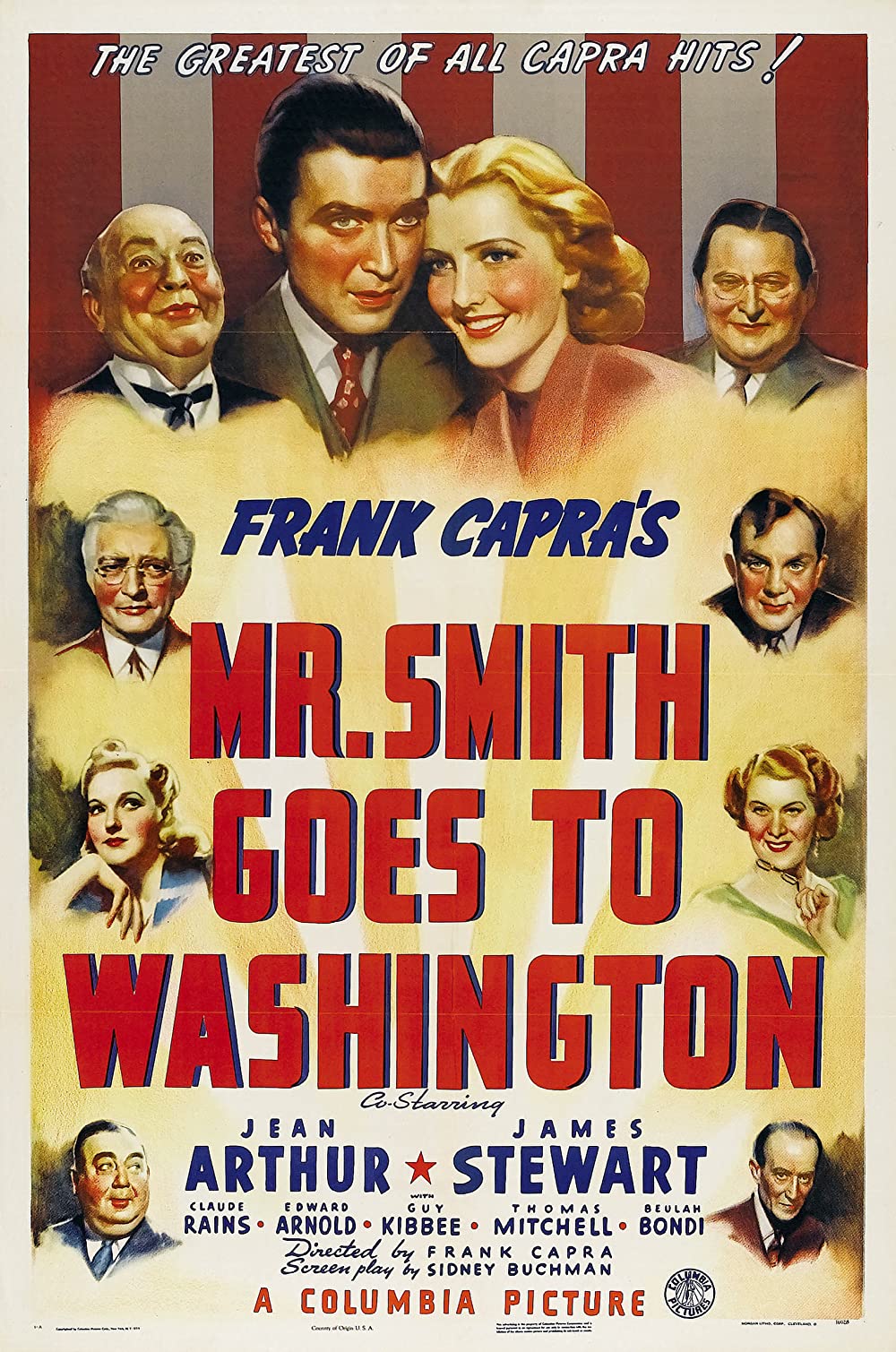 Plot: A young man is appointed to the US Senate where he battles for what he knows is right, although it brings him down mentally.

Even if it is incredibly idealistic and naive, "Mr. Smith Goes to Washington" is a truthful and unafraid standard setter of the corrupt politics picture and stars Jimmy Stewart in one of his greatest roles.

Frank Capra's cherished classic lays it on pretty thick with the sentimentalism and schmaltz. But that's expected I guess. Still, the acting is great. Given the three leads, that should also not be surprising. James Stewart was perhaps the only person in 1939 that could make a character this simultaneously noble and naive. Claude Rains' character is an interesting villain but the conclusion to his arc is pretty silly. Jean Arthur does well as the spunky love interest. It's that rare political drama that's critical of the status quo in American politics, but is intelligent enough to propose sensible means of changing things.

A great story about fighting for what you believe in. Also shows the ability of how one man can make a change.

Ladies and gentlemen: THIS is the definition of cinema. The fact that it was made 70 years ago is totally unbelievable. Every single aspect, from cinematographical to technical, is wholeheartedly assembled into one single piece of cinema masterpiece. Italian director Frank Capra directs his most complex, fast-paced and utterly fantastic superlative cinematic project that almost no director by that time could ever dream of. This is not only his best masterwork, but it is, arguably, the best political drama ever brought to amazed worldwide audiences.

When a member of the US Senate passes away, an inexperienced and unsophisticated man, Jefferson Smith, is appointed to fill the vacancy, causing controversy among the process. After his idealistic ideas lead him to Washington and starts a …

If you enjoyed The Insider, this will be a treat for you. Jefferson Smith (James Stewart) was elected as Senator with the aid of Hubert "Happy" Hopper (Guy Kibbee). The efficient Secretary Clarissa Saunders (Jean Arthur) orients Smith on how to create a bill. He likewise fancies the Senator Joseph Paineâs (Claude Rains) daughter Susan (Astrid Allwyn). some observations that are unlikely was the kids being violently threatened and hurt, length of the hearing and how the crowdâs reaction were not controlled well during the emotional scenes, which made it into a circus. Exceptional screenplay with lines from Jefferson â âOpen your eyes and always see life around you as if you'd just come out of a long tunnel.â âThere's no place out there for graft, or greed, or lies, or …

A fresh faced and idealistic young man is elected to the US senate, but when he finds that he is meant to be nothing more than a puppet of big business interests he tries to buck the system from within. The part Jimmy Stewart was born to play, he is perfect as the optimistic everyman who is shocked by the reality of the political system. In this day and age of political spin, Frank Capra's trademark rose-tinting looks terribly naive, but characters such as Claude Rains' ex-idealist who learned to "play ball" and the cold hearted fatcat Edward Arnold, manipulating democracy for his own selfish ends still feel extremely familiar. This is one of those rooting for the little guy stories that makes you switch off your world weary cynicism and believe that the good guys can win, for a couple …

No posts have been made on this movie yet. Be the first to start talking about Mr. Smith Goes to Washington!