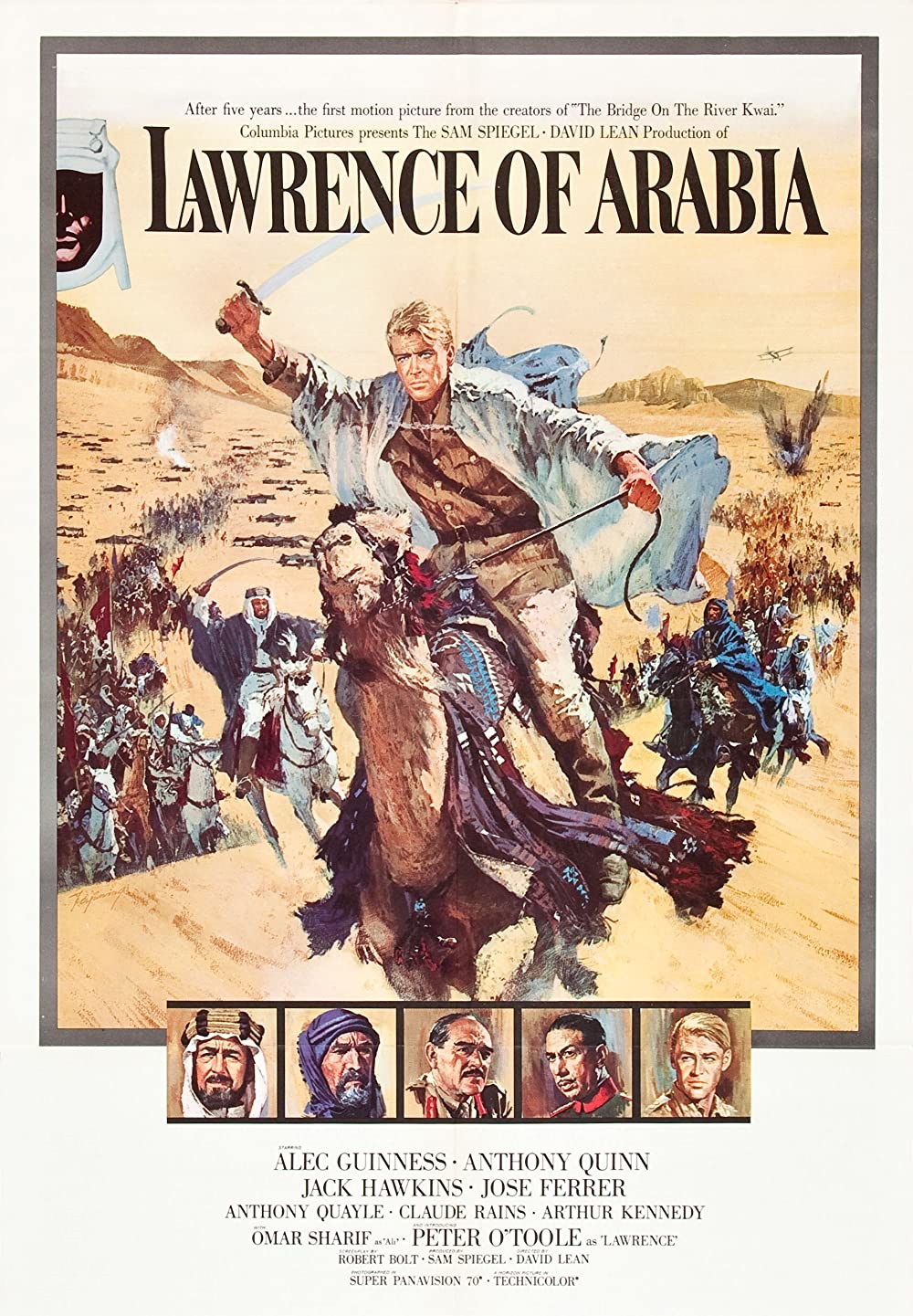 Plot: A British officer leads a charge in Africa to discuss politics. While he was once British, is he now part of the African culture he tried to create?

It's setting, acting, direction, and just about everything else is perfect, "Lawrence of Arabia" is a masterpiece epic.

An epic of grand proportions. I've had this film on my DVR for 3 2 years and had yet to watch it. Mainly because of the daunting length, but I finally did, and it was magnificent. They just don't make them like they used to. According to Robert Osborne, of TCM fame, this was O'Toole's first big film role, as well as Sharif's. O'Toole was actually the third choice to play Lawrence. This is a wonderful film, that is worth the almost 4 hr. length. And is a must watch for any film buff, though it might not have much re-watchability, it is great.

This is one of the last great epics - a film that doesn't do anything small in scope. Peter O'Toole portrays T.E. Lawrence with a balance of courage and compassion and the film doesn't pull its punches with diving deep into the political climate of the times either.

To describe the epic grandiosity of a landmark visual feast like David Lean's Lawrence of Arabia is not an easy task. More than being an absolute masterpiece in the entire history of moviemaking, wonderfully reaching a superior category of cinema in the process, the absolute and definitive work of art of David Lean is a cinematographic phenomenon. Moreover, it is a spectacle of giant humanistic proportions and a faithfully developed essay about one of the most inspirational and flamboyant personalities that played a giant role in the modification of the course that human history had during the times of World War I. It is also an examination on the very foundations of modern humanity. It adopts different faces throughout, from presenting a self-reflexive approach to drawing …

Lawrence of Arabia is a stunning film that ranks among the greatest ever made. It is simply epic, with its brilliant cinematography and depiction of the deserts of the Middle East. It is a timeless classic that has been enjoyed for the last 50 years and will surely be enjoyed for 50 more.

The story begins with T.E. Lawrence (Peter O'Toole) a lieutenant in this British Army during World War I who is disliked by his superiors because of his lack of enthusiasm and general indifference to military discipline. When Lawrence gets the opportunity to transfer to the Arab Bureau, he links up with Sherif Ali (Omar Sharif) to begin an Arab uprising against Turkish rule under the authority of Prince Faisal (Alec Guinness). As time goes on, Lawrence shows increasing solidarity with his Arab …

"Lawrence Of Arabia" by Yojimbo

Peter O'Toole stars in his breakthrough role as T. E. Lawrence, a British officer who united the nomadic tribes of Arabia to defeat the occupying Turkish forces during World War I, while preventing the British Empire from taking over in their stead. David Lean's sweeping biopic is epic in every sense of the word. It is character study, war movie and birth of a nation all rolled into one near four hour package. Lean's stunning visuals show human beings as insignificant insects on the face of one of the harshest environments on Earth, the savage beauty of which seduced the young idealistic Lawrence. The story shows him to be a little more complex that the usual heroic revolutionary figure, a typically hard headed Brit who was too stubborn to consider defeat and really an outsider from both …

No posts have been made on this movie yet. Be the first to start talking about Lawrence of Arabia!