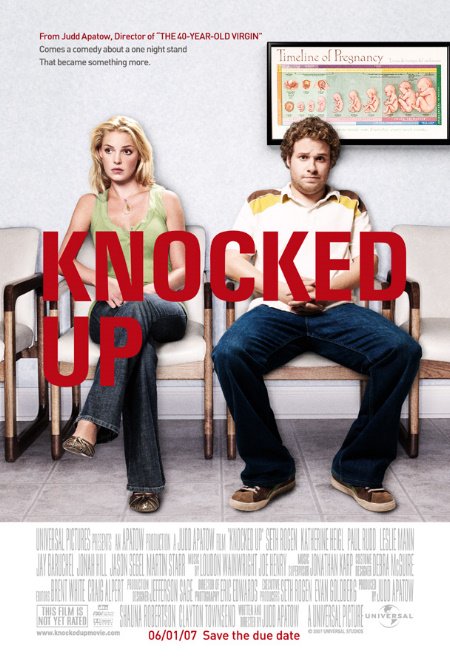 Plot: Ben Stone is a typical party guy, that is until a beautiful woman knocks on his door and says she is pregnant with his baby.

Incredibly stupid and pointless movie. I could barely stay awake during this awful abortion of a film. I did not laugh one time and felt intense dislike for the main character throughout.

Apatow does it again with great characters, hilarious writing, and a heart-filled story.

Alison Scott is a production assistant on E! Entertainment who has just got a promotion. So, she celebrates at a club with her sister Debbie (Leslie Mann). Her sister goes home leaving Alison whoâs already had too much to drink. She starts chatting up a stranger at the bar, Ben and before they know it it's off to the bedroom much to the chagrin of the usually responsible Alison. When morning comes, the two happily separate from one another and both think that is the last they have seen of each other until Alison starts barfing at work. She and her sister rush to the drug store and buy up every brand of pregnancy test they can find and, yep, that little red line shows up every time.

I didn't enjoy it as much as I thought I would. That said, I don't think it's a bad movie. It's just not as great as people hyped it up to be. Personally, I think "Superbad" is funnier because it was willing to take risks and it reminded me of the flicks of the 1980's. "Knocked Up" is more sitcom material with constant laughs but it's not daring enough. It needed that extra push for me to consider it a great comedy. The best thing about this movie is Paul Rudd, who served as a foil for the main male character. I even prefer "The 40-Year-Old Virgin" over this one. "Knocked Up" tried to be "The 40-Year-Old Virgin" by throwing references here and there. It just didn't work for me. It goes to show that the mainstream is not aware of sharper, funnier, indie comedies out there like the film …

It's okay, in a sense

I may have been the last person in the world to see this movie. I don't think I enjoyed it as much as everyone else did, simply because I've heard so much about it there wasn't any way it could measure up to what I was expecting. I was surprised. I will say, though, that the first half is much better than the second half. In the first half it's pretty original and fresh, but the second half degenerates into your typical romantic comedy that embraces stereotypes you've seen a million times before: guys are selfish and dumb, women are shrill and controlling. And of course, the couple breaks up only to reunite when the water breaks and everyone lives happily ever after. Sorry if I just spoiled it for all of you, but you can see this ending coming a mile away.

No posts have been made on this movie yet. Be the first to start talking about Knocked Up!