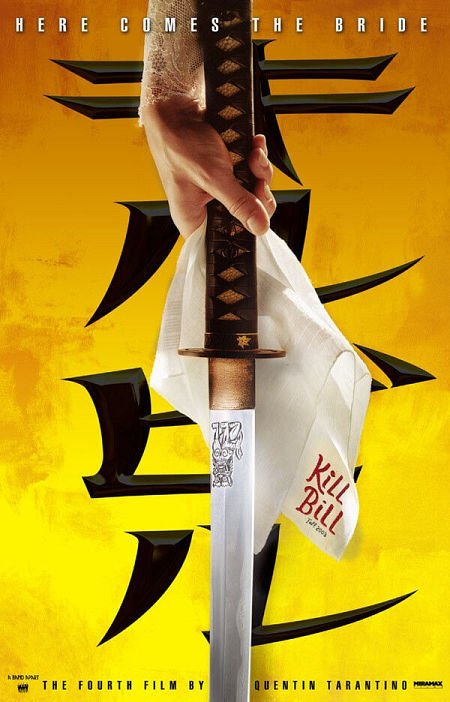 Plot: A woman, who her assasins believe to be dead find that she is alive and try to kill her, while at the same time, she goes after revenge against them.

Action and Quentin Tarantino's slick dialogue are nonstop, and will keep you on the edge of your seat.

FAVORITE MOVIE.kill bill vol 1. the story in this movie has been done before in old movies but kill bill makes that story and makes it feel new.the soundtrack to this movie is one of the greatest soundtrack ever and the fight scene at the end was well shot and Directed really well. and this movie will get a 4/4 star's "Best revenge flick of 2003".

Another great Tarantino film that is one of the more gruesome ones. I thoroughly enjoyed it, but as a Tarantino fan, I felt shorted on his brilliance with this one.

The cold dish is served...

In my review for Inglourious Basterds, I mentioned that my perspective on Tarantino films various between two, usually.
Either he makes an incredibly smart movie, or a gruesome movie. Inglourious Basterds was somewhere in the middle for me, with equal parts good and bad. That's pretty much how I feel about Kill Bill Vol. 1, except it's just more aesthetically pleasing.

Uma Thurman is an actress that I loved from Pulp Fiction. She delivered Tarantino dialogue with fluency and came across as foxy. But in Kill Bill, she proved she could also kick some butt.
When you can get past all the graphic content and things the Bride achieves during her quest for vengeance that may seem gruesome, this is a tale of female empowerment.
I think what worked best in the story was the combination of …

A captivating tale of revenge, justice, honor and redemption! The movie opens with a blood-splattered face that belongs to "The Bride", whose name will be 'beeped' all through the film. She's a deadly assassin who was once a member of the Deadly Viper Assassination Squad, codenamed Black Mamba.

The Bride decides she's had enough of the life, changing her name and getting married in a desert town with intent to begin again under a new identity. Naturally, this doesnât sit well with Bill, the head of the Deadly Viper Assassination Squad and The Bride's former lover.
Bill kills everybody who attended the wedding, and has his Squad beat the pregnant Bride into a pulp, before shooting her in the head, only a second after she informs Bill the baby is his.

Four years pass where The …

A former member of The Deadly Viper Assassination Squad is betrayed and left for dead on her wedding day and sets about revenging herself upon her erstwhile colleagues. Quentin Tarantino has often been accused of plagiarism in the past, and Kill Bill not only happily acknowledges his many homages it positively revels in them, right from the "Shawscope" intro screen. His films are clearly a labour of love and every reference, every shot, every song on the wittily compiled soundtrack, even every sound effect has been carefully selected. Tarantino's films are not, as many po-faced critical snobs suggest, style over substance because the style IS the substance. This is a movie for the movie lover and Tarantino's skill is in his ability to seamlessly blend so many genres, from anime to …

I've been waiting for a special edition forever. I refuse to buy them until Tarantino releases them together, as they should be. I will have to tide myself over with the soundtracks, I guess.&amp;nbsp; I did break down and buy Grindhouse separately though.

I own both the DVDs that are out right now. They are awesome, just buy them now so you can enjoy them!

Are they ever coming out with a 2 disc set for each of these movies...or better yet one that shoves all into one film?&amp;nbsp; If anyone has any info...let me know.