Into the Wild Movie Information 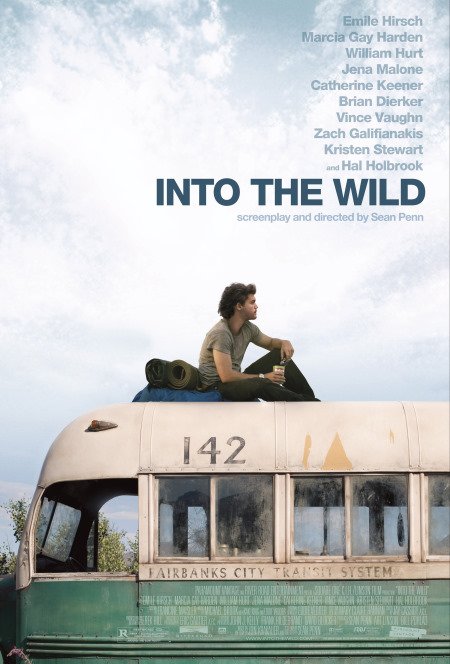 Plot: A top student gives up all his possessions and travels to Alaska on foot.

Not as enjoyable to watch as the book was to read, but Emile Hirsch is stellar in the leading role.

What sort of movie can you expect from a dumb kid that travels to alaska alone with basic provisions? A pretty good one. An artfully woven story that is well worth the praise its been given. I walked into this ready to be angry and condescending. Our protagonists death turns from 'no common sense' to more of a heart-breaking tragedy. A young man who has a good run at surviving 'on his own' test his meddle and doesn't get the chance to learn from his mistakes. Tragically beautiful movie.

The story is about a top student gives up all his possessions and travels to Alaska on foot. This movie has good acting and well done writing.

Into the Wild review

Christopher McCandless (Emile Hirsch) names himself "Alexander Supertramp" after detaching himself from his regular everyday routine in the city and going to the wilderness. Walt (William Hurt), Billie McCandless (Marcia Gay Harden) and his sister Carine (Jena Malone) have no idea about the plans of Chris to donate all his savings to charity, obliterating his identification and credit cards. He encounters a hippie couple Jan Burres (Catherine Keener) and Rainey (Brian H. Dierker), Wayne Westerberg (Vince Vaughn), Mr. Franz (Hal Holbrook) and Tracy (Kristen Stewart) along the way.

Astounding screenplay, gorgeous locations and cinematography can be seen on this picture. One of the many wonderful quotes from the movie: Chris â âMoney, power is an illusion. Itâs all up here.â …

Okay, I am going to come right out and say it bluntly- this movie was amazing. The visuals, the writing- were purely beautiful. This movie will stick with you. It's based on the true story of Christopher John McCandless, who after college graduation, decides to give up everything materialistic- his credit cards, his car, even his home- to go and live out in the wild, to be at one with nature. This movie portrays his journey- and does it very well. No, this movie did not completely change my life- but yes, it did change the way I look at things, and when a movie does that, well, then I think it's considered to be a pretty good movie. It's an amazing movie, but it is three hours long, so if you're going to watch it, set everything aside and dedicate three hours just for that.

One of the Most Introspective Films of 2007

The only regret I have is not catching this film in theaters. If I had, this easily would have been on my Top 10 Films of 2007 list. I would like to start off by giving kudos to Emile Hirsch for his completely captivating performance. He won me over just a few months ago in "The Mudge Boy" and I cannot believe this is the same guy from the fun yet sophomoric "The Girl Next Door." I've seen all of his films and this is his most mature film to date, alongside "Imaginary Heroes" and "Alpha Dog." He's definitely someone that everyone needs to watch out for because he's building quite a repertoire. He's got "Speed Racer" and "Milk" coming up; the latter I have high expectations for now that he's proven himself as a serious actor. In this film, he has completely embraced his character, not …

No posts have been made on this movie yet. Be the first to start talking about Into the Wild!