Indiana Jones and the Temple of Doom Movie Information 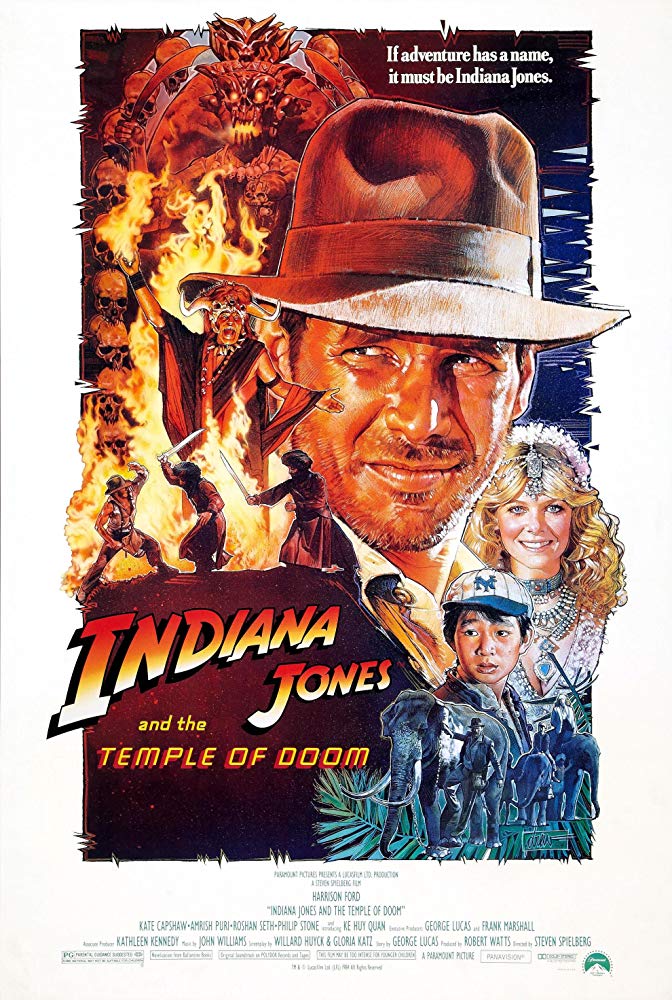 Plot: After escaping from Hong Kong, Indiana Jones, a night-club singer and his 12-year old companion land in India where whey must help a village regain it's mysterous stones, along with their children, from a dangerous cult.

While there's a few annoying characters in the sequel, it's still an enjoyable installment.

The story is about after escaping from Hong Kong, Indiana Jones, a night-club singer and his 12-year old companion land in India where whey must help a village regain it's mysterous stones, along with their children, from a dangerous cult. This movie was fun and frighting to watch at the visual's.

Indiana Jones (Harrison Ford) with the aid of a sidekick Short Round (Jonathan Ke Quan ) and Wilhelmina "Willie" Scott (Kate Kapshaw) goes to Shanghai. They all discover that sacred stones were and the children were captured. Willie was irritating, humor was unfunny and the raft sequence was just exaggerated. Screenplayâs cheese factor was very high and action sequences were bountiful though impossible at times. The score always keeps the movie alive and Ford convincing. A darker and more violent sequel doesnât translate into a better film. Indiana Jones and the Temple of Doom is a fun ride if not taken seriously.

Harrison Ford dons his dusty old hat once more for his signature role as the heroic archaeologist Indiana Jones. This time he finds himself in India, when a poor but deeply religious town asks him to track down a powerful and sacred stone that, according to legend, will bring prosperity back and save the children of the village.

Joining Indy this time is a young Chinese orphan named Short Round and a whiny damsel-in-distress type American lounge singer Kate Capshaw who becomes upset whenever she breaks her nails and acts too much like a spoiled brat.

The film's primary villain is an bald, intimidating ruffian named Mola Ram (Amrish Puri), a sadistic Thuggee high priest with a sinister grin who is the leader of an Ancient murderous cult that worships a sinister god steeped in live …

"Indiana Jones And The Temple Of Doom" by Yojimbo

Swashbuckling archaeologist Indiana Jones returns to investigate an evil cult in India who have kidnapped the local children to search for the sacred stones of Shankara. Temple Of Doom has long been considered the weak link of the original trilogy, mainly because of the ill conceived inclusion of two sidekicks. The romance with Kate Capshaw is unconvincing as she literally spends the entire film either screaming or whining, and adding a streetwise kid to the mix is always the kiss of death. This obviously calculated attempt to appeal to a younger audience is added to by some broadly over-played humour that is completely at odds with the dark tone of the rest of the film. In the unlikely event that kids want to see a film about child abduction, slavery and human sacrifice I doubt very …

Darker But Retains Its Timelessness

I used to think that this was the weakest link of the "Indiana Jones" series but upon viewing it for the third time, I realized its greatness. I'm glad that Steven Spielberg did not try to duplicate "The Raiders of the Lost Ark" because that would have been a rip-off. Instead, he gave the audiences something different, something a bit darker than its predecessor. This time around, Indiana Jones does not jump from one country to another, which I think made the storyline that much more focused. The addition of Kate Capshaw and Jonathan Ke Quan was a good move because they provided a much needed comic relief since this installment deals with child slavery. The change from a strong female of the first film to a high maintenance female of the second film was interesting even though it is a …

No posts have been made on this movie yet. Be the first to start talking about Indiana Jones and the Temple of Doom!