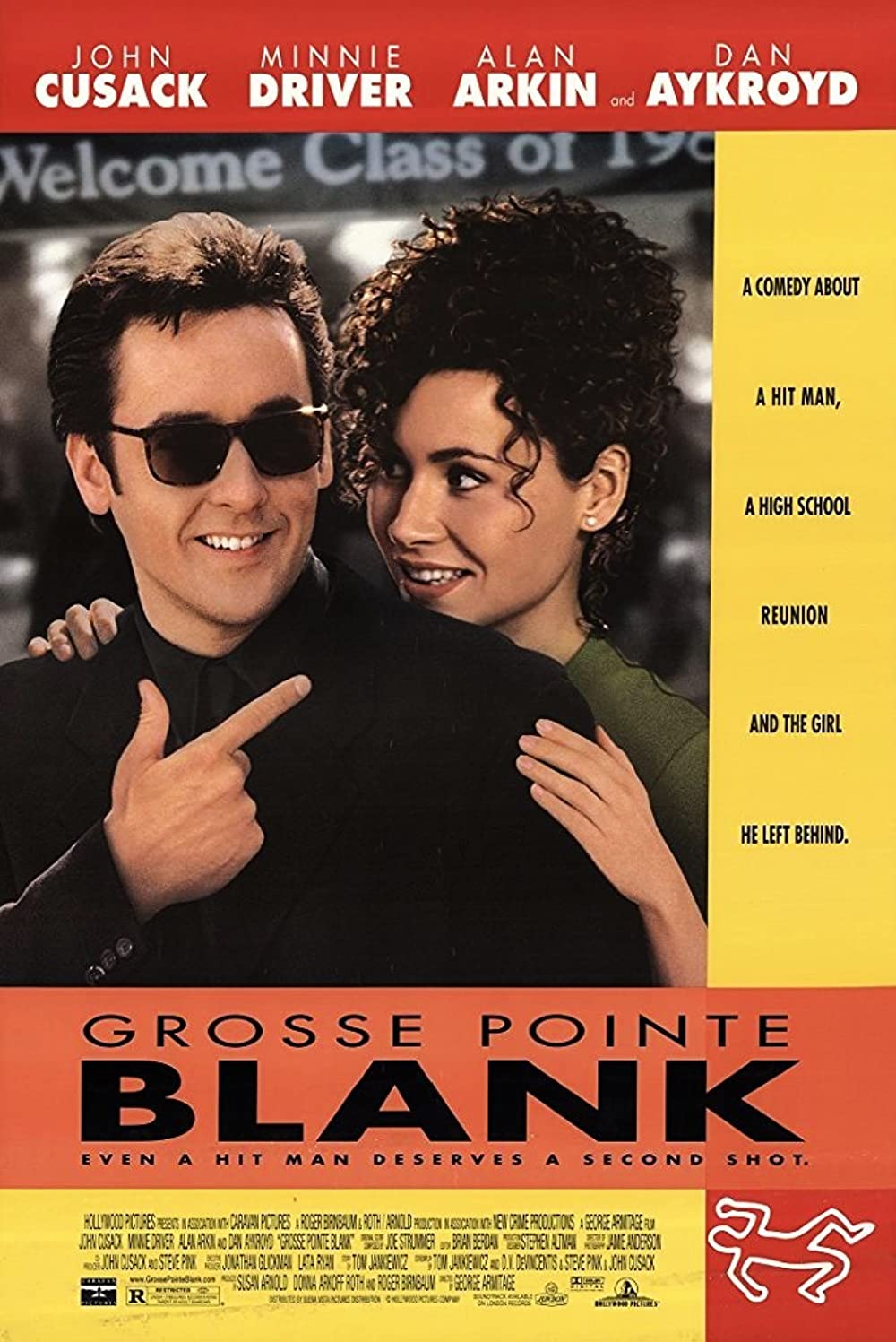 Plot: Martin Blank is a hit man with some unresolved emotional problems. Blank gets invited to his high school reunion, which he has no intention of attending until he gets hired for a job back in Grosse Point. When he gets back he has to deal with the girl he left on prom night, as well as, his hit.

A fast paced and funny dark comedy with some off kilter romance and random action violence. John Cusack is spot-on casting as the professional hitman facing an existential crisis. Minnie Driver is good as the love interest, trading sharp barbs with Cusack throughout the film. Dan Aykroyd has some fun in a rare villainous turn.

The sharp writing in this film isn't lost, even as the pacing and action are ramped up in the manic third act. Aykroyd and Cusack have excellent comic timing and chemistry, playing opposing forces in this unique comedy.

Intelligent killer fun. Good performances from John Cusack and Minnie Driver. Professional killer goes to his high school reunion, tries to patch it up with sweetheart he ditched, and avoid getting killed. Smart writing, well performed.

Professional contract killer Martin Blank decides to stop off at his high school reunion while out on a job and rekindles an old flame in the shape of Minnie Driver. Part romantic comedy, part post-Tarantino noir, this is the kind of cinematic hybrid that can sometimes go disastrously wrong (Gigli anyone? Thought not....) but this brilliantly written example is not one of them. The dialogue is witty, snappy and insightful, it has likeable characters played by a great cast headed by John Cusack at his most charming and who shares a real chemistry with his co-star. There are also some great supporting performances by Dan Aykroyd as a rival hitman, Alan Arkin as Blank's unwilling psychiatrist and Joan Cusak as his kind of post-modern old school noir style secretary. Add brisk no nonsense …

Martin âMartyâ Blank (John Cusack) is a hitman who has issues related to his profession. Dr. Oatman (Alan Arkin) is the petrified therapist of Martin who gives sound advice. His assistant Marcella (Joan Cusack) suggests that he attend the class of â86 10 year reunion in Grosse Point Michigan to loosen up a bit. Blank meets up with the articulate DJ who he stood up before, Debi Newberry (Minnie Driver). As they catch up with each other, another hitman named Grocer (Dan Aykroyd) stalks Blank. The film has one of the best soundtracks around. Songs from Queen, English Beat, A-ha, and English Beat will surely liven up any scene. Its comedy is unique and hysterical; I felt this could have been a classic if it had a better script, a charming/pretty female lead and memorable ending. …

I must confess my review will be a little biased. I have long been a huge John Cusack fan, since around 1985 which was the first time I saw the marvellously under-rated high school black comedy Better Off Dead. Cusack has had the knack over the years of choosing good scripts usually (but not always) in smaller budget films. He is a fine fine actor in an understated sort of way and his gravity and comic timing lend him well to this role. Cusack plays the world weary hitman who gets a second chance at life courtesy of his High School Reunion and his childhood sweetheart (whom he jilted at the prom). While this is predominantly a comedy, it's not a laugh a minute it is also hardly a typical movie. How many hitmen are the good guys? More to the point how many hitmen are the good guys, get …

No posts have been made on this movie yet. Be the first to start talking about Grosse Point Blank!