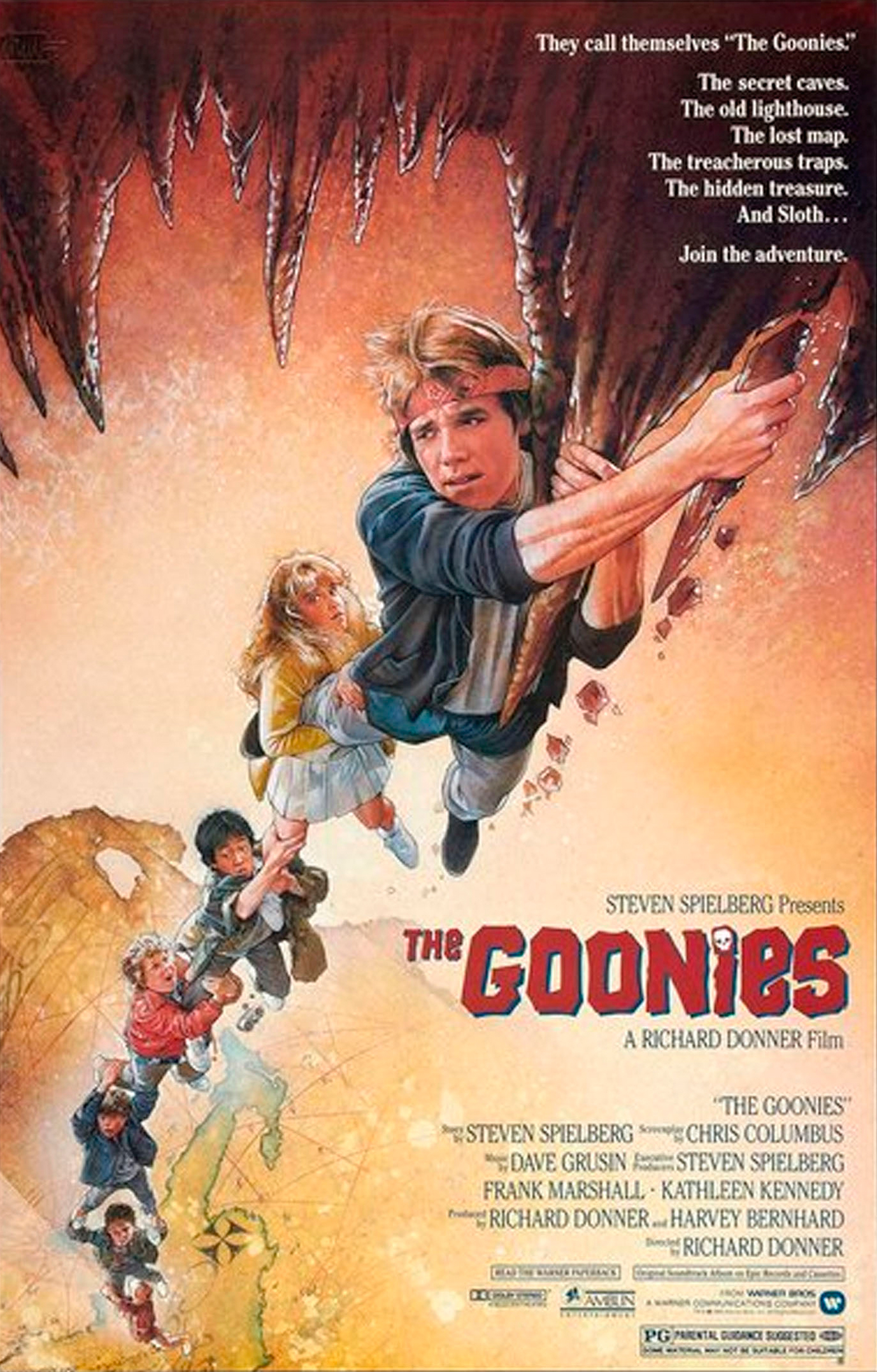 Plot: A tight-knit neighborhood is threatened to be torn apart when their homes may be sold from underneath them. The neighborhood kids have one last adventure by trying to find a pirates treasure.

An epic scale adventure movie that awakens the kid in all of us.

A tight-knit neighborhood is threatened to be torn apart when their homes may be sold from underneath them. The neighborhood kids have one last adventure by trying to find a pirates treasure. This movie is pretty much for every one to watch Adults and children too, the movie has remember able characters like chuck or the other gang.

As a kid, an adventure movie couldn't get much better than this. As an adult, an adventure movie geared towards kids cant get much better than this. The standard movie for substitute teachers to play in class. This movie has all the charm and wonder that you can handle. A film that opened the door for fat kids being forced to do the 'truffle shuffle'. Please people, keep this movie alive. Show it to your kids.

If you were a child in the 80s, or had a child in the 80s, or even just knew a child in the 80s, you must have seen The Goonies. As a person raised in the 80s, it feels strange to even try to review a movie that was such a huge part of my childhood. Movies really do have a hand in shaping our lives, and I think every movie fan has a few movies that they have watched many times throughout their lives and can't imagine life without them. The Goonies is one of those movies. For the few of you living under a rock, The Goonies is about a group of kids who set on one last adventure before their neighborhood is bulldozed over. The Goonies set out to find the treasure of One Eyed Willy, but their plans hit a bump when the recently escaped from prison Fratelli's, start chasing after the …

Okay seriously who wouldn't want to be a Goonie?? Or rather, who WASN'T a Goonie of some sort when they were a kid? I know I was. I was 11 when this came out and lemme tell ya, my whole circle of friends and I had our own adventures as well. Living in West Virginia we have mountains all around us which provide for hours and..well, YEARS of imaginative entertainment, so when the Goonies came out, it was just an addition to our already extremely active minds! I think the first time I saw this I was on vacation, visiting my Mom in North Carolina. Anyway, GREAT MOVIE, still to this day I'm caught up in the tension when they are trying to play the organ and not "b flat", I feel the excitement when they find the artifact "key" in the map, I love childlike honesty when Mikey (Sean Astin) has a …

You idiot you glued it on upside down!

I remember the first time I saw this movie in the theater, it was one of the coolest movies I have ever seen. Of course anything with skeletons, and shootouts was the coolest thing that any 8 year old could have seen. Ann Ramsey was the most frightening woman I think I had ever seen, and she put on one of the best performances ever as Mama Fratelli. Mystery, comedy, and the adventure in search of One-eyed Willy.

The best quote from the movie is Chunks confession: "Everything. OK! I'll talk! In third grade, I cheated on my history exam. In fourth grade, I stole my uncle Max's toupee and I glued it on my face when I was Moses in my Hebrew School play. In fifth grade, I knocked my sister Edie down the stairs and I blamed it on the dog... When my mom sent me to the summer camp for fat …

No posts have been made on this movie yet. Be the first to start talking about The Goonies!