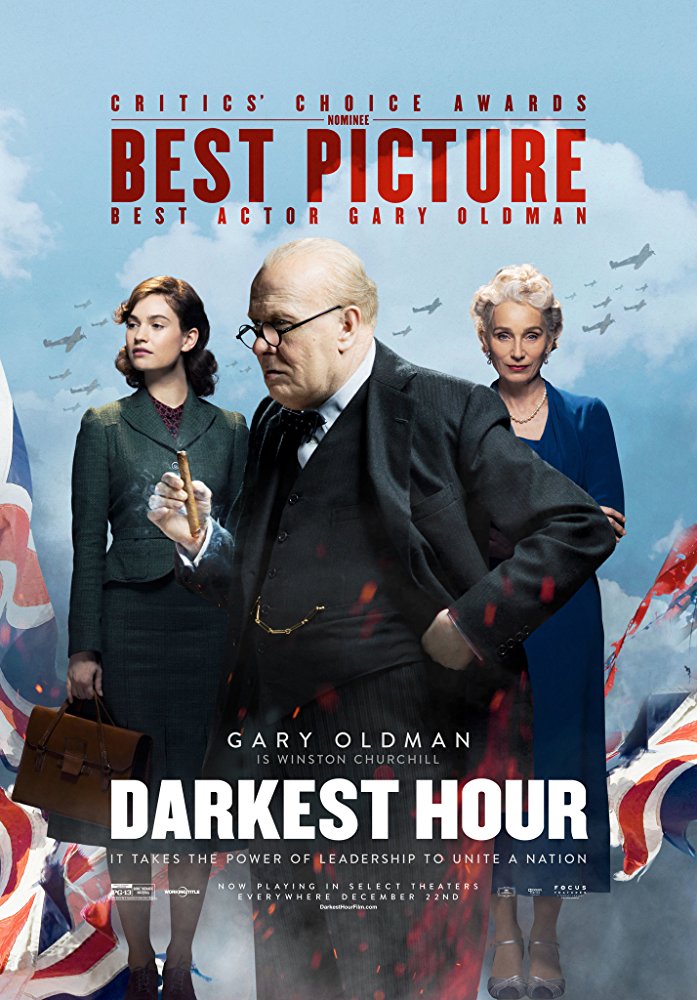 Plot: Mere days after becoming the new Prime Minister of Great Britain, Winston Churchhill faces one of his most daunting and defining trial: as Nazi Germany subjugates Western Europe, Great Britain is clearly in its sites. An unprepared public, a skeptical king and with his own party plotting against him, Churchill will have to figure out how to rally his nation, and, in doing so, change the course of history. -- Chris Kavan

Joe Wright's film DARKEST HOUR is a good historical drama but it's no Dunkirk. Or if I may use an older reference, King's Speech. Remember how good that was?

Not a bad movie, but one Hollywood can make in its sleep. Churchill is an interesting, complex person, but this movie didn't even try to dig deeper than the familiar legend. Gary Oldman does fine work, but this is probably one of the least interesting roles of his career.

After a vote of no confidence in Prime Minister Neville Chamberlain, Parliament selects veteran politician and often divisive figure Winston Churchill to lead the country in its fight against Hitler.

Darkest Hour is a political drama set during what has become a period in British history that has come to define the national consciousness; the darkest of times, but a time that forged the courage of our convictions and bravery in the face of adversity. Because the story is so wordy, director Joe Wright has felt the need to overcompensate with some unnecessary visual embellishment and plot contrivances that threaten to topple over into âThe Comic Strip Presents: Strike!â-style Hollywood self-parody, the worst example being the scene set in an Underground carriage which is â and …

'Darkest Hour' is this years 'Lincoln'. Both films star a well respected actor who is unrealizable and brings one of the best performances of their career. History sure dose repeat itself.

It's quite shocking more actors have played Winston Churchill than James Bond, Spider-Man, and Doctor Who. Lets not forget we had another movie about Winston Churchill early this year named 'Churchill' staring Brain Cox. However, my excitement for Oldman to play the British bull dog was high, because I knew he's gonna stick his teeth into this meaty role, and he sure did. Gary Oldman was absolutely terrific and not once will you guess it's him. The level of humility, fear, and rage Oldman brought to role makes you see another side to …

No posts have been made on this movie yet. Be the first to start talking about Darkest Hour!