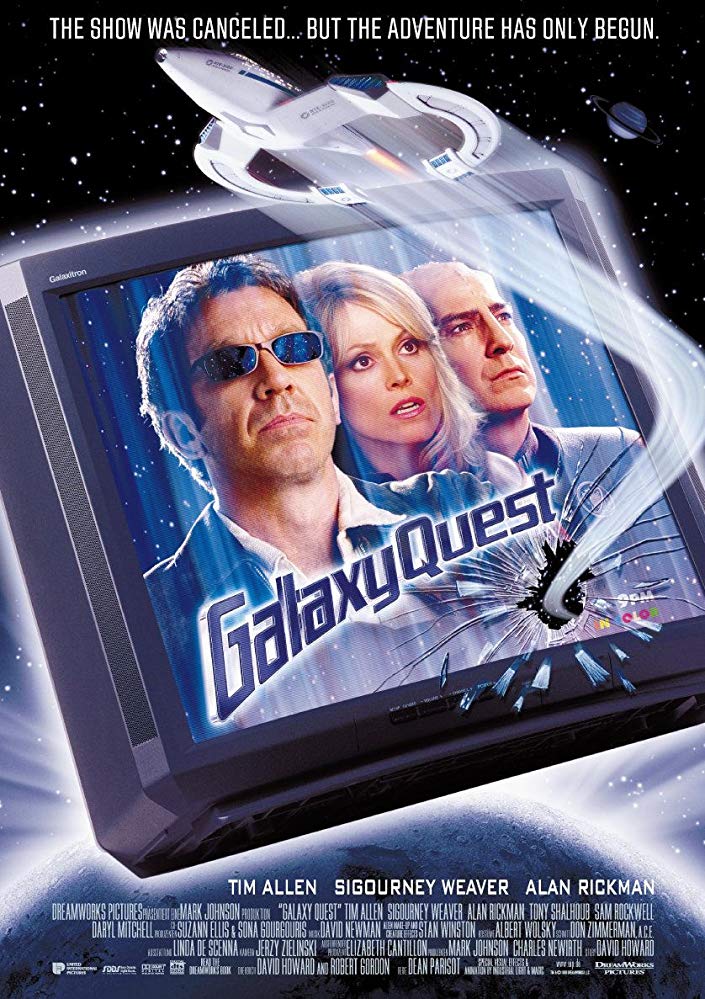 Plot: After 18 years, stars of the popular "Galaxy Quest" cult sci-fi program are still appearing at conventions in their old costumes. It seems they are doomed to a life of mediocrity until an alien race arrives who have built their entire culture around the show.

An original and hilarious satire of science fiction television, its recurring tropes, and fandom.

This is a brilliantly-written spoof on sci-fi films and, simultaneously, on the fanbases that support them. Tim Allen is goofy and charismatic as a washed up actor thrown back into the spotlight and the film's campy tone is entertaining and engaging.

Another one I don't get tired of seeing again. I'm glad that Sigourney was able to show off her body somewhat. She's said that's something she wanted to do in more than one interview I've seen/read. This is an enjoyable movie overall.

Guy Fleegman: "Did you guys ever watch the show?" There are instances were the obsession crosses reality. Prime examples would be the cult following of Fight Club, Star Wars and Star Trek. The latter, being a direct homage to the popular show, was really well directed. Jason Nesmith (Tim Allen) is the egoistic commander Peter Quincy Taggart, the captain of the Protector. He encounters fans which in fact are real aliens seeking help from Sarris, who threatens the race of the Thermian people. Screenplay didn't feel forced or coy, with a few provocative lines: "It's the simple things in life you treasure." - Fred "I could try." - Tommy "Never give-up. Never surrender." - Mathesar/Jason. Has some cheese factor, a few flaws (gun at the end when it was destroyed, no scratches on the …

An alien race recruit the crew of the NSEA Protector to aid them in their fight against a galactic tyrant, unaware that they are just a bunch of washed up actors from a cancelled TV show. I'm not the biggest fan of Tim Allen, but he is spot on as the drunken egotistical has-been bickering with his equally well-played supporting cast in this surprisingly well made sci-fi spoof. The film is stolen out from under him (ironically, considering it's similarity with the target of the parody!) by Alan Rickman's Spock-like Dr. Lazarus, a Shakespearian actor pained by what his career has come to; the look of horror on his face when he has to utter the line "By Grabthar's hammer, what savings!" is priceless! With a knowing and witty script and effects and action sequences that shame most sci-fi …

By Grabthar's hammer, we live to tell the tale.

I loved this movie from the moment I saw it. The cast is huge! Jason Nesmith (Tim Allen) the shows lead, and Allen portays him as the prefect self centered jerk, the guy that knew that he was the most beloved charcter on the tv show and he feels that he should be able to dictate the direction of the other cast members to keep his popularity as high as it was in its prime.
Alan Rickman is as awesome as ever playing Alexander Dane the charater that has been pidgeon holed into, even though he got sick of the roll years earlier. He had critical acclaim behind his acting years, but that would not keep the swarms of fans from begging for the only thing people wanted, to hear him utter his classic line over and over again.
Sigourney Weaver played Gwen DeMarco and she was the one that …

My Favorite Sigourney Weaver Movies by The WHB

No posts have been made on this movie yet. Be the first to start talking about Galaxy Quest!