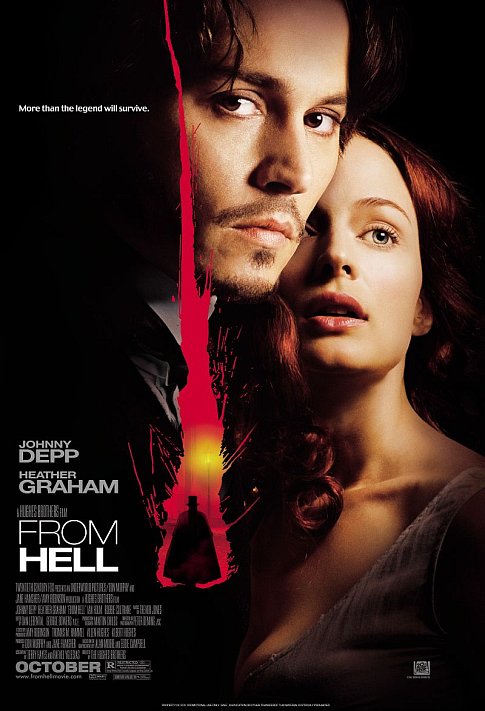 Plot: The true life horror story of Jack the Ripper gets a new spin.

The atmosphere in 'From Hell' creates this stomach turning, graphic and this gothic universe where the Ripper lives, and that's why it gave this movie a unique look and feel to it. Johnny Depp once again brings a solid performance in this movie and the overall film is a decent watch.

An atmospheric and thoroughly creepy horror film that creates a unique gothic universe that plays with threads of the Jack the Ripper legend. Ian Holm is especially good as an unhinged potential suspect and the film is at its scariest when the Rippers identity is unknown. The widespread feeling of paranoia is well-done.

I don't know. Just didn't do much for me.

"From Hell" by Yojimbo

Based on a graphic novel, this pseudo-gothic serial killer movie based on the case of Jack The Ripper would probably have been ignored if it weren't for Johnny Depp's presence in the lead role. "Whitechapel" is populated by "corlummeluvvaduck" cockernee extras wandering dark cobbled streets in a way that reminded me of The Comic Strip Presents...Strike!, a fact not helped by Robbie Coltrane's appearance as Depp's literary cliche-spouting sergeant. But the biggest problem is that it's all so half-baked...all of the characters are superficially realized cliches and the mysticism angle that seemed so interesting, particularly Depp's drug-fuelled "visions", is completely irrelevant. The plot will probably be interesting to those not familiar with the whole Ripper conspiracy theory, but …

No posts have been made on this movie yet. Be the first to start talking about From Hell!