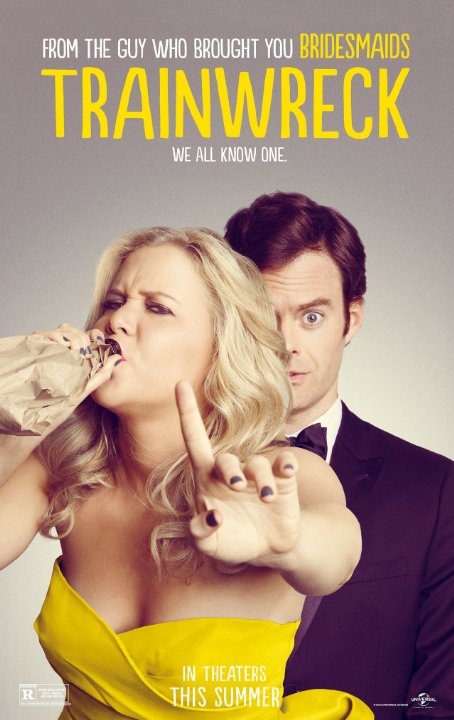 Plot: A woman raised to believe monogamy isn't realistic finds her uninhibited lifestyle starting to wear thin. When her magazine job leads her to interview a charming sports doctor, she finds herself falling for him - and maybe finding romance is just what she needs in her life. -- Chris Kavan

Despite all the unnecessary cameos and a runtime that's longer than it needs to be, Amy Schumer and Judd Apatow know funny, which is what keeps "Trainwreck" from overstaying its welcome.

An actually funny film. Amy Schumer is great as the woman who has a hard time keeping relationships. Bill Hader playing the straight man is a change, but he's also very good. LeBron James also is a pretty good actor in a limited role. I loved the running cheapass plot line.

Trainwreck (2015) R Amy (Amy Schumer) has spent her whole life thinking that monogamy was not for her. Then she met Aaron (Bill Hader), and her world changed. I loved this romantic comedy with a twist. Usually, itâs the guy who is a cad and whose life is changed when he meets the girl. This film turns that idea on its ear as Amy Schumer plays a woman who doesnât want commitment, and, in fact, she wants the guy to leave as soon as sex is over. Cuddling to Amy is like a death sentence, and spending the weekend together is her idea of hell. Then she meets Aaron and, against every fiber of her being, she starts falling for him. Hader is exceptional as the straight man in the film, and he and Schumer work well together on-screen. Lebron James is funny as himself, playing Aaronâs best …

Trainwreck Rating 6 out of 10

We all know Amy Schumer as the Stand-up Comedian. We have been watching her on television since last couple of years and know that she is good at it. However, when it comes to movies, things change! â The award winning Amy falls slightly short of her comic-timing. While Amy tries to do the best she can, i.e. being funny, it seems that the script didnât have enough room for laughter.

The movie starts on a good note and within few minutes the adults will realize how careful they need to be when they are convincing children. Parents will realize that you should not teach your children anything that would harm their future.

In the first scene of the move, Amyâs father excellently convinces his both daughters how divorce isnât a …

The title says it all

My heart goes out to those who died and got injured at the Trainwreck screening shooting in Louisiana cinema.

The story is about a woman raised to believe monogamy isn't realistic finds her uninhibited lifestyle starting to wear thin. When her magazine job leads her to interview a charming sports doctor, she finds herself falling for him - and maybe finding romance is just what she needs in her life.

Okay I'm just going to say it, I never was a fan of Amy Schumer. I was never a fan of her work and to be honest I'm not such a big fan of her. I don't know what it is but these just something about her that I just can't put my finger on it. I only say I'm not a fan of her because I don't hate her as a person, because right now as I speak shes taking action on gun control because of …

No posts have been made on this movie yet. Be the first to start talking about Trainwreck!