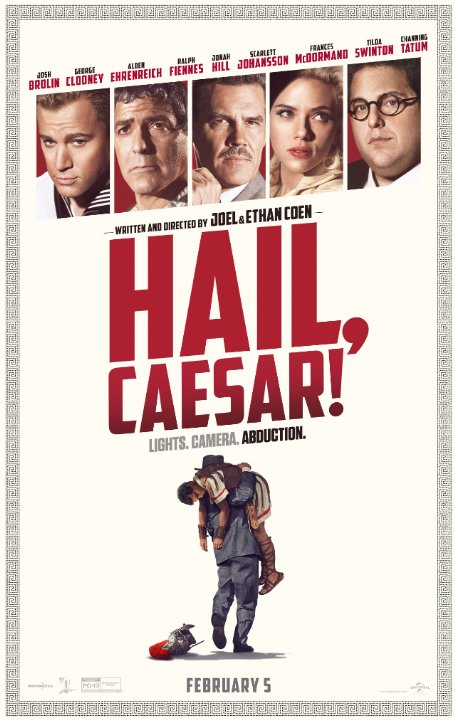 Plot: Eddie Mannix works for Capital Pictures in 1950s Hollywood as their "fixer" - a man whose sold job is to keep the big stars in line and clean up when things go wrong. But when studio star Baird Whitlock goes missing, Mannix may find not all problems can be fixed so easily. -- Chris Kavan

There's a lot happening in "Hail, Caesar," but it never goes anywhere. Still, it's a charming and lively ode to the classic Hollywood era.

Hail, Caesar isn't the great Coen brothers movie that I wanted, but it's a one that I can enjoy and admire in some away. This movie is both a love letter and almost an accurate look at old fashion film making. There's plenty to like here. The cinematography is excellent, the cast is superb, the humor is rich and hilarious. But the real stand out in "Hail, Caesar" was Alden Ehrenreich. This guy was brilliant and stole every scene he's in. I'm looking forward seeing him in the Han Solo spin-off. I got faith in him. I mean, he made a convincing idiot with charm that made spaghetti as a cowboy rope- this guy can do it.

A movie studio fixer joins forces with one of its stars to locate one of their biggest box office draws who has been kidnapped by communists.

Hail, Caesar! is the Coen brothers at their most playful and is both an affectionate homage to and parody of the Golden Age of Hollywood. It lovingly recreates some of its iconic genres while at the same time amusingly pricking its image of perfection with behind the scenes absurdity. The big name ensemble cast are all eminently watchable, including Josh Brolin as the proxy Noiresque gumshoe studio executive, Scarlett Johansson as a glamorous yet acerbic Brooklyn-accented starlet and Alden Ehrenreich as the goodnatured but talent devoid star of generic cowboy pictures. It all feels a little frivolous when compared to the Coen's best work but …

Hail Caesar is a light and fluffy love letter to the glamour of Hollywood showbiz during the 1950s, a time where studios were pumping money into epics, musicals, and westerns instead of superhero movies. The plot is essentially a series of vignettes highlighting both the hard work and the hijinks that ensued behind the scenes at that time. So laidback in its own warm nostalgia that the actual conflict doesn't start til halfway through the picture.
The cast is game for the fast talking dialogue and tongue in cheek humor. Josh Brolin is the moral center of an impressive ensemble of perfectionists, alcoholics, stuntmen, movie stars, and fifth columnists. Channing Tatum, Scarlett Johansson, George Clooney, and Alden Ehrenreich do great. Johansson is near perfect as a classic platinum …

a movie that has no story - vanity filmaking

This movie has no proper story no proper end and seems like it was made just satisfy the writers and directors need to do some old skool movie scenes.
set around the move making of the 1950's george cloony plays a actor who is kidnapped by what turns out to be communists.
josh brolin plays the guy who fixes all the scandles and deals with all the problems with the stars and see's over the movie making business side, he is very good in this acting wise. but there is no more story to tell. it doesn't go anywhere. its just vanity film making , it looks good and the set pieces are cool but without a story its all pointless.
it ends and your left thinking why did they make it if not to just satisfy their own need to make some cool old time movie scenes.
there is humour in this but its …

No posts have been made on this movie yet. Be the first to start talking about Hail, Caesar!!