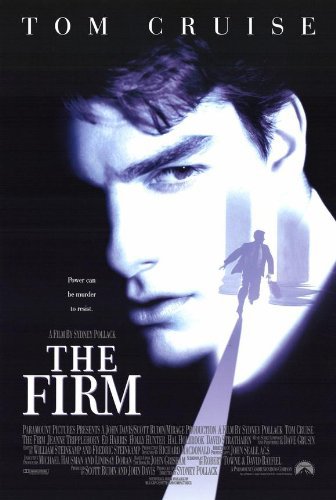 Plot: A brilliant young lawyer is recruited by "The Firm" and soon he is basking in his newfound wealth. However, he soon learns that his new company has its dark side, and when the FBI approaches him for help, he has to make his own decision on where he stands.

I shouldn't judge a movie based on the book, but it is really hard not to with this movie. They could have done so much better with Grisham's work. This movie was flat and unimaginative. The ending is horrible and so boring, I felt like they were trying not to go over a certain time-limit and just had to end it somehow. Tom Cruise is good, but wasn't given much of a script to work with. Do yourself a favor and read the book.

Doesn't quite hold the same depth and immediacy of the book, but this is still a well-made thriller that is quick-paced and exciting. The slow reveal of the corruption of the law firm especially worked.

I loved the book -- in fact it's in my top 5. The movie was pretty good. If you haven't read the book you'll probably like it more than I did -- it's a great story.

This movie was okay...i say this because I had high expectations to begin with--Tom Cruise and Gene Hackman seem like a sure bet. Both of their characters fell short. Gene Hackman's character just quits by the end of the film and is no longer the antagonist that had made the scene (with the wife) so riveting. Still, for most of the movie the plot loses steam. A lot happens in the first twenty minutes of the film to make the viewer think "this is going to be intense!" ; however, Cruise's character comes up with a crazy scheme with Holly Hunter to fool both the FBI and the Firm...too bad the viewer isn't included. The viewer can only guess at what he is planning to do (reveal a fraud), which works for some movies but not for this, and it becomes easy to lose interest while secret papers …

I read "The Firm" after watching it, not knowing what expect (I didn't know if it would be a tight or loose adaptation). It was pretty close, with the difference mainly lying in the ending, and that where Sydney Pollack makes this story go from good to great: The book, at the end, makes Mitch out to be a coward and a traitor at the end, by making him give into the FBI. But, in the film, Mitch is seen as a hero who doesn't give into anyone. The FBI doesn't win and the Mafia doesn't win. Mitch wins. He bows down to no one. Tom Cruise also plays a *great* Mitch McDeere, with a lot of intensity and charisma. You cheer for him as the protagonist. Holly Hunter is top-notch with her portrayal of the vulnerable, secretary turned accomplice Tammy. Gene Hackman is also great as Avery Tolar, the …

A young lawyer (Tom Cruise) takes a job in a Memphis law firm who doesn't share his wife's (Jeanne Tripplehorn) feelings about the firm and those working for it until he looks into the deaths of two lawyers in the same firm. He then launches his own investigation into the firm, which captures the attention of the others in the firm -- and the Feds.

It is the performances in this movie that is worth watching. They make what has to be an impossible situation seem possible. None of the actors deliver a poor performance.

The visuals of "The Firm" are not as good as the acting, but they work pretty well. I would have liked to have seen something that aided in the suspense.

Now, I have not read the John Grisham novel this movie is based on. I therefore don't know if the book is …

No posts have been made on this movie yet. Be the first to start talking about The Firm!