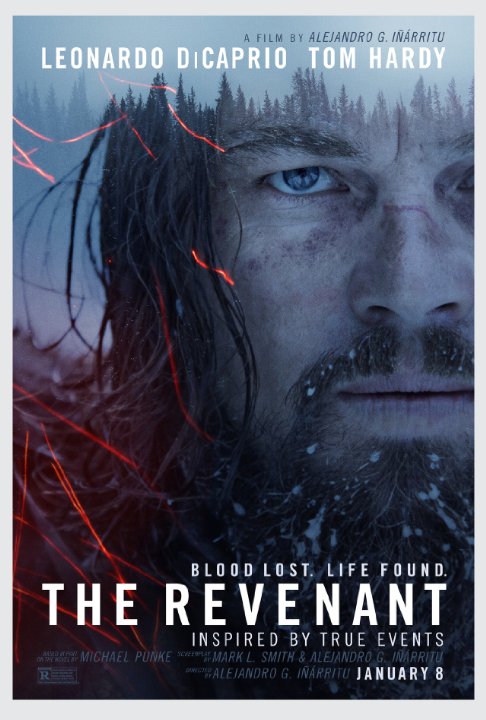 Plot: Based on a true story: In the 1820s, in the uncharted wilderness of America, Hugh Glass set out with a hunting party on an expedition. Glass was mauled by a bear and left for dead but through sheer will and to get back to his family, Glass survived - but that wasn't the only thing on his mind as he set out to payback the men who left him behind. -- Chris Kavan

One thing is for sure, Alejandro G. IÃ±Ã¡rritu knows how to shoot a movie. "The Revenant" is a gritty story of betrayal, survival, and revenge unlike any you've seen before.

Yet another incredible performance by Dicaprio that will go unnoticed by the folks at the academy. This kid should have a shelve filled with gold statuettes by now sadly the Oscar competition seems to be who the Academy favor at that givin time. It never seems to be Leo. In my own personal opinion Dicaprio is one of if not the best on the planet.

Revenant (n. one who has returned, as if from the dead)

Icy water trickles gently over the rocks. All is quiet. As the camera tilts up and pans to the right, the barrel of a gun creeps out from behind a tree. Two armed hunters are now visible, moving with caution over the steady flow of the stream.

A nearby gunshot shatters the calm. The men stop. Another shot.

Screams of terror and fury fill the air as the two men return to their hunting party. Arikara Indians gallop around the camp of fur trappers. Their arrows whiz past the two men, piercing the skulls of others around them.

A small group of survivors flees the Arikara. Reaching a boat offshore, the remaining trappers drift down the Missouri River, battered and defeated, carrying only a fraction of the beaver furs …

"I ain't afraid to die anymore. I'd done it already."

You have movies with bloody scenes so exaggerated that it actually becomes laughable. Take for example "The hateful Eight". Liters of blood spatter around in this film. It's not really meant to be funny but it isn't shocking either after a while. The key moment in "The Revenant" however, is so incredibly realistic and bloody painful to behold. A dashing exploit of CGI and choreography. The interplay between DiCaprio and the computer animated bear had to be meticulously coordinated. I think this required some scrupulous work, resulting in an impressive battle scene. Had it been a real-life, trained bear, I'd give this bear an Oscar.

Now Leonardo DiCaprio snatched the coveted statuette away from the bear. In my opinion Leo …

The Revenant is a throwback to the old school Hollywood film-making that rarely happens anymore. It was filmed on location in harsh weather conditions and with a larger-than-life historical figure as its focus against the backdrop of a beautiful but dangerous wilderness. I can't promise it's for everyone as it's a dark and sometimes brutal picture. Aside from the oft gory violence, there is a bleak portrait of human nature that is depicted with the only silver lining being the will to survive and endure. Leonardo DiCaprio is Hugh Glass who survives a bear mauling but is left for dead by his companions (led by a despicable Tom Hardy). Glass survives and embarks on an arduous journey of survival fueled by vengeance and perseverance hand in hand. The cinematography is gorgeous;they filmed …

This is an understatement, for the Revenant is one of the greatest survival films ever made, also is objectively the best movie that came out last year (2015). I mean, naturally lighted cinematography that looks brilliant cannot be beaten. And in case you were wondering about my opinion of Star Wars the Force Awakens, it's 300x not as good the Revenant by a long shot.Top 5 Movies of 20151. Revenant, The (2015)2. Inside Out (2015)3. Brooklyn (2015)4. Hateful Eight, The (2015)5. Creed (2015)

From what I've seen people either loved it or hated it. I for one, loved it. I think it was filmed excellently, especially due to the use of natural light. All actors did an amazing job, specifically Tom Hardy who pulled of his role perfectly. It's a great one and you can feel the cold of the wilderness throughout the film.

i dont think he deserves one for this movie. as much as i like leo and&amp;nbsp; think he should of won before. the acting in this pretty much anybody half decent could of done. in fact he played it so dead pan and&amp;nbsp; it lacked of emotion another actor would of been more suited,good film but a bit of a anti climax story and not accurate at all. he never even caught the guy in reality,he will win though i expect and i,ll be happy either way, as about time but acting wise he has done much better

Raw and unrelenting - if Leonardo DiCaprio doesn't win an Oscar this time around I would be surprised and majorly disappointed. One of the best movies of 2015, hands down.

the Revenant is poetry, is raw and is history. This could be your fav movie from the last years or more.