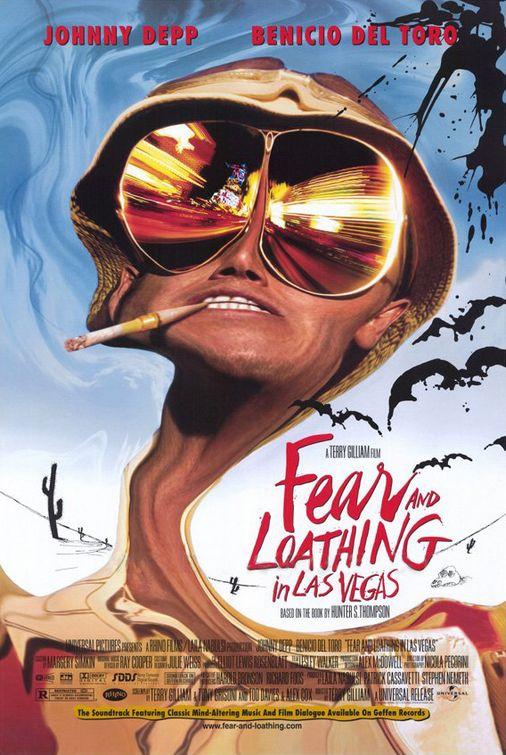 "Wait. we can't stop here, it's a bat country". What a ugly, crazy movie with strange and scary visuals, but that's what drugs are if you really think about it. Johnny Depp in the movie was so good playing this drug taking journalist. The story is really good in the movie, two guys high on drugs going to Las Vegas to find the american dream but they find out is just a myth.

UGGGGGHHHH I miss Vegas. The montage was fun and crazy. It shouldn't be considered a movie though. It is more of a ride. I enjoyed it a lot and it is a MUST see, but it is overall just nonsense and craziness for a couple hours. But boy does this movie make me miss Vegas.

I may have had a hard time getting into the right frame of mind to watch this film (high), but I found it utterly incomprehensible, plotless, and frustrating. It certainly has a lot of energy, but the film is all over the place, visually and thematically.

"Fear And Loathing In Las Vegas" by Yojimbo

Hunter S. Thompson's semi-autobiographical novel and essay on the emptiness of the American dream in post sixties Las Vegas is brought to life by Terry Gilliam in a way very few could've managed; his mixture of lurid visuals, surreal humour and celebration of the grotesque captures its spirit perfectly. It's long been one of my favourite books and this is exactly how I pictured it in my head as I read it. Johnny Depp nails Thompson and is spot on as the drug-addled outsider who sees himself as an alien in his own country, providing some very insightful commentary on the America of those times. Benicio Del Toro is also fantastic as his Samoan sidekick and it's hilarious to see the pair of them crashing through "polite society" without the slightest regard for acceptable, conventional …

Sweet mary one toke over the line. Best movie of all time period. I can watch it a thousand times and not get sick of it. Scumbag!! ill find where you live and burn your house down you piece of *****. Del Torro is incredible. So is Depp for that matter. Talk about good acting. These 2 guys were named to the 50 most beautiful people list. Haha. Dr Gonzo in the tub one of the best looking people in the world that is funny. My favorite part is in the elevator. You must be a rider. huh? what class are you in? Class? what the ***** do you mean. I ride the big *****ers the real big *****ers yeah. Were with the factory team. Bull*****. hmm? bull*****. I think there's some kind of ignorant.. move over man.. chicken *****er in this town. Pink mother *****er. Best Movie Ever!

A Savage Cannibalistic Thirst for the Amer Dream

Just as in those foul years of Nixon, ours is a time for the Politics of Fear and-- let there be no mistake, my friends -- the Boss has learned quite of few tricks since then. But so have we, ho ho, thanks to Hunter and Gilliam and others with Vision.

Hunter, like Mark Twain and Philip K Dick, is one of the very few writers who have truly mastered the American Idiom. He was also the most important political writer of 20th century America, and Gilliam's film does him justice.

Drugs,yes, are an integral part of this film, but let this not be dismissed as pure hallucination. The crude deformations of the familiar, the general atmosphere of vileness, yea, even the most obscene and savage depictions of American lust degenerating -- seen here through an acid lens -- come closer to a …

No posts have been made on this movie yet. Be the first to start talking about Fear and Loathing in Las Vegas!