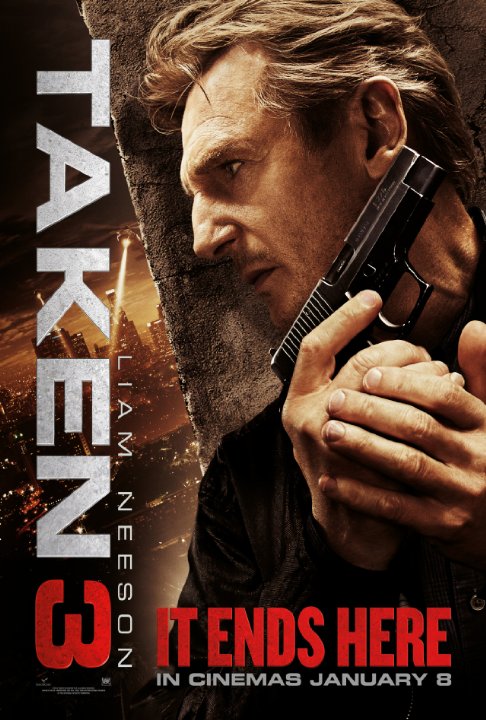 Plot: When he's accused of a murder he didn't commit - and once that hits too close to home - ex-operative Bryan Mills will stop at nothing from tracking down the real killer, even as he himself is targeted by a saavy police inspector. -- Chris Kavan

A different formula but essentially still Liam Neeson on the run (mostly from the cops this time) while trying to figure out who framed him for his ex-wife's murder. It's decent for your action fix, but still feels a bit redundant at this point. Neeson has the grizzled ass-kicking down to an art form, but even he seems to be going through the motions. If you liked the first two films (and pretty much any other Neeson vehicle) this is more of the same, but with 100% more Forest Whitaker to make things somewhat more interesting.

Better than the sequel but the first is still a classic. Fight scenes seemed slow motion which shows how Liam Neeson is aging. Writing made the twists and plot more engaging. It's surprising now that Bryan MIlls uses a gun when in the first installment he just used his hands. Forest Whitaker is always a joy to watch regardless of his role. The antagonists however was rushed. Overall a decent action flick with a dark plot.

Better Than the 2nd, Never as Good as the 1rst

I think Taken 3 has gotten some undeserved reviews. I think that Taken 3 beats the first sequel, it doesn't beat the first of course but the movie certainly isn't that bad. The Taken name doesn't really suit this movie of course because no one is Taken but really in the end the movie was only made to make money. I didn't like the idea to get rid of Framke Janssen at first because she was one of the best characters in the whole series but they did well bringing Forrest Whitaker in, I thought he did a good job in there. I found myself cheering for Whitaker and Liam Neeson at the same time. I really enjoyed the first hour of the film more than the more action packed ending, I thought the drama at the first part of the movie was great and it set up Liam Neeson's motive to save his family yet …

starts corny gets good then gets boring cliche

taken one real gritty dark and kicks ass, taken 3 starts of so corny every scene is awful., then it gets quite good with the cat and mouse game as forest whiitaker as the cop tries to catch him but then it gets all to silly and cliche and obvious and boring. feels more like the last awful die hard movie than taken 1,
there was a great video on you tube called i think how to make agreat action movie and they list all the things you shouldn't do and show scenes. this movie has all the dont's. poor camera angles to disguise scenes. hard to know whats going on. villians with a foreign accent silly car chases etc etc.
whys he chasing him so bad anyway when he knows he didn't do it.
the story is naff. this time his ex wife gets killed and he gets blamed. why not just make him take on a …

The Taken series is the new Hangover films, they just never going to stop.

The story is about Bryan Mills, whose reconciliation with his ex-wife is tragically cut short when she is brutally murdered. Consumed with rage, and framed for the crime, he goes on the run to evade the relentless pursuit of the CIA, FBI and the police. For one last time, Mills must use his "particular set of skills," to track down the real killers, exact his unique brand of justice, and protect the only thing that matters to him now - his daughter.

I can't believe a good film like the first Taken then get squeal's that can turn into a train wreck of a cash grab. I remembered in the first film how brutal the fight scenes where and that's due to the sound in the movie. Every punch sounds rock hard and you …

No posts have been made on this movie yet. Be the first to start talking about Taken 3!