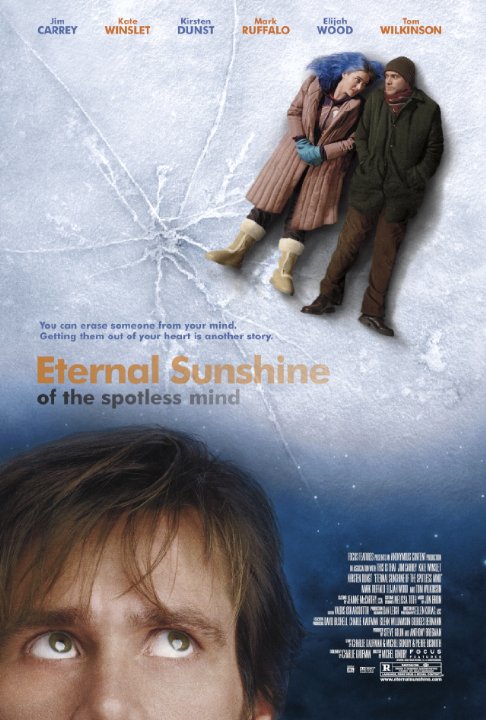 Plot: Two people who meet by chance decide that they have had enough of each other and try to erase one another from their minds with a new procedure.

One of the best, and most original science fiction movies I've ever seen. It's deep with its message of how we want to hold onto our memories, even our bad ones.

Ten years after its release, I finally see this movie. What else can I say. The film is thoughtful, elusive, and simply brilliantly done. The story, the performances by awesome cast, and the direction perfectly fit. Nice! Will probably watch this for the second time in less than ten years.

The story is about Two people who meet by chance decide that they have had enough of each other and try to erase one another from their minds with a new procedure. What a beautiful masterpiece this film was just a well made movie with a good cast and crew.Jim Carrey and Kate Winslet worked really good together.

"Eternal Sunshine Of The Spotless Mind" by Yojimbo

A shy young man finds that his ex girlfriend has physically erased their relationship from her memory and decides to follow suit. Featuring a screenplay by the king of quirky Charlie Kaufman, Eternal Sunshine is that rarest of beasts; a Hollywood film that is smart, creative and above all, original. Visually very inventive, there are some really nice touches throughout the film often used with great subtlety in the background and it's a very intelligent deconstruction (literally) of a relationship and it's decline. Kate Winslet is every over-educated under-achieving heterosexual man's wet dream (particularly if you have a penchant for neurotic booze hounds with bad dye jobs...*ahem*) and Carrey is at his least irritating, offering by far his best performance. Despite having one foot in …

This movie opened my eyes! Its the film that showed me that Love is more than just a word. Joel (Played by Jim Carrey) is a shy and lonely man, who's real joy in life is finding Clementine (Kate Winslet) a women who's personality is the extreme in opposite. So to make a long story short, Thier relationship ends bitterly. As a result, Clementine decides to erase Joel from her memory. (by a medical mind erasing procedure) to mitigate her pain and heartache throughout her relationship with Joel. Joel ends up discovering this decides to undergo the procedure himself out of spite and revenge. And then we all see Joel's memories of his relationship with Celementine, memories of love compassion and innocence. We see Joel has regretted ever udnergoing the operation. He realizes the underlying …

Jim Carrey as the shy Joel and Kate Winslet as the eclectic hair color chameleon Clementine. Romantic story that deals with erasing people's memories. The direction of the film was very unique, using various focal points and images as if you were really in the mind of Joel Barish. Soundtrack, cinematography and acting was superb. Screenplay was likewise enjoyable. A few lines from the movie: Joel Barish - "Constantly talking isn't necessarily communicating. I could die right now, I'm just â¦ happy. I've never felt that before. I'm just exactly where I want to be." Clementine Kruczynski - "I'm not perfect." Its very surprising to see Carrey perform well in dramatic scenes. As a veteran comedian, the comedic scenes are laughable. Winslet owned the part, very expressive and …

No posts have been made on this movie yet. Be the first to start talking about Eternal Sunshine of the Spotless Mind!