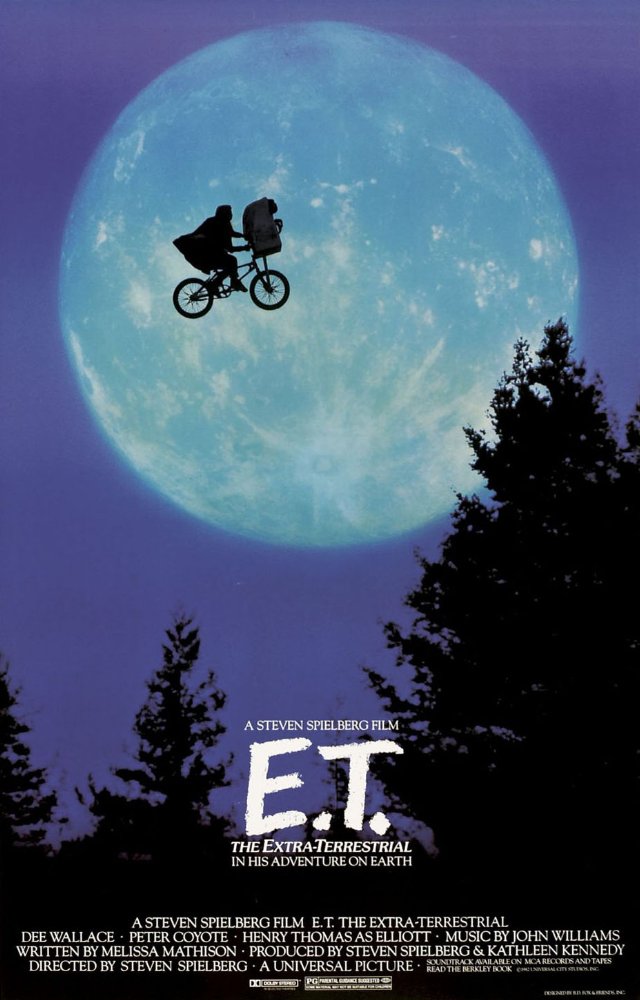 Plot: A small boy and girl try to help a friendly alien find his way back home.

Like Elliot leaving a trail of Reese's Pieces, "E.T." reels you in for a beautifully original family adventure.

Another charming and unforgettable Spielberg's classic! A family icon for all human kind to see, and a gem that permanently marked not only the Hollywood cinema of the 80's, but the hearts of millions as well. 86/100

Truly an American classic. Spielberg hit this one out of the park. It's amazing that a director with such a diverse filmography chose to do two alien movies within 5 years of each other. But, where Close Encounters was too long and really a bit more adult oriented, this was a truly family film. This movie had it all, tears, action, adventure and great acting performances from unknown actors. Then, of course, the special effects are great and other than the final chase scene, they still hold up today, E.T. still looks great.

A classic for children

Spielberg is a master of cinema. There's no doubt. He can always top himself, and when he doesn't, he makes a damn good movie.
Henry Thomas is officially my favorite child actor of all time (not working today). The amount of emotion and genuine reactions the children in this film part is incredible. Thomas made Spielberg at the audition cry, and he cried again when ET (a plastic prop) in the movie parted.
The whole movie depends on the performances of the children, and they are all perfectly casted, which just proves to show even more that Steven Spielberg is a cinematic genius in his own right.
There are so many iconic scenes in this film, such as the finer to finger touch, Elliott flying on his bike, the gang racing around a construction site and they all manage …

Elliott (Henry Thomas) adopts an E.T. (Extra-Terrestrial) who was left behind. The timeless flick had a gorgeous score and touching moments. Matters of friendship, perseverance, having a heart and communication were exhibited. The screenplay was sensitive, such as the following lines: Ellitiot â âYou could be happy here, I could take care of you. I wouldn't let anybody hurt you. We could grow up together, E.T.â âYou've gone someplace else now. I'll believe in you all my life, every day. E.T., I love you.â Michael â âDamn it, why don't you grow up? Think about how other people feel for a change.â The special features with interviews were fascinating in itself. A childhood global classic for all ages to love and cherish, E.T. delivers the maturity of one person while …

When a movie is a hit it's sometimes called "home run." But Steven Spielberg doesn't hit home runs he hits Grand Slams! If there is any film that absolutely defines Spielberg in my mind it's this one. This film is a complete and total success both as entertainment and within the framework of the director's objectives. It's very odd to look at these films in retrospect after most of them have already gone on to become world-wide phenomena and see that many studios rejected not only this film but many other successful Spielberg ventures. Oddly enough Hollywood insiders have always viewed him as a risk taker. This film's success, however, shouldn't have surprised anyone at all. In E.T. we have a wonderfully structured story that seamlessly crosses over from fairy tale to comedy to drama …

No posts have been made on this movie yet. Be the first to start talking about ET: The Extra-Terrestrial!