Heaven is for Real Movie Information 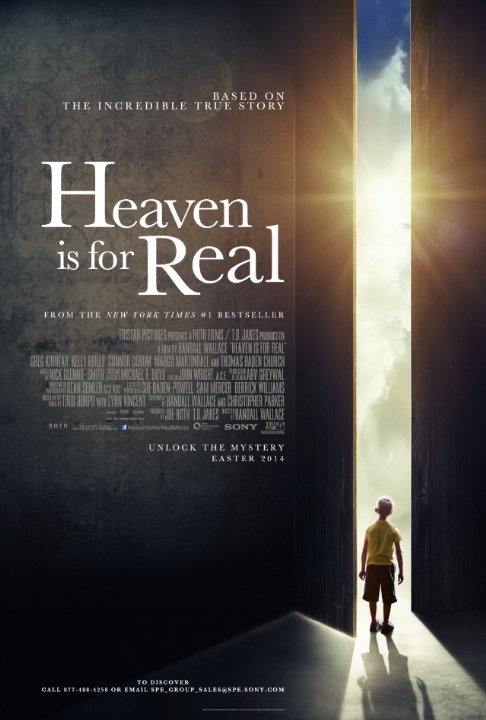 Plot: A family comes together and brings inspiration world-wide when their son's near-death experience results in an amazing journey - as he describes his visit to Heaven. -- Chris Kavan

The film revolves around Colton Burpo a 4 year old and his father who is a pastor. Greg Kinnear displays a solid and earnest showing here. Connor Corum was really wonderful but the slow start just kills it. Visual effects looked authentic and the story itself is worth viewing. Had moments where the cinematography was just gorgeous.

Based on the #1 New York Times best-selling book of the same name, HEAVEN IS FOR REAL brings to the screen the true story of a small-town father who must find the courage and conviction to share his son's extraordinary, life-changing experience with the world. This movie had good acting and the movie was not as bad as I thought it will be.

At one point in my life, I identify myself as an atheist, that I felt like religion isn't for real. But then, that changed and I am now a believer of God (not necessarily of Heaven). The film is so believable! Colton is really adorable and his innocence makes this film more believable. Plus, I appreciate the debate raised by this film, I thought it would be a film that is hard-cell "Heaven is for Real". NO. It discusses the issue and the story goes well on that subject. Some may think this is a boring film (so Christian), no, it isn't. Though the whole film, the cinematic technique and direction, feels like really heavenly and visually comforting it won't make you asleep. You feel the lightness of the film and at the same the amazement on how everything Colton says are true and …

A must watch for non believers

From a guy who always kept his religious beliefs quiet (And still do) as soon as I read online about Colton Burpo a 4 year old who told his father pastor Todd Burpo (Played by Greg Kinnear in the film) that he, after being almost declared dead during surgery for a ruptured appendix, had visited heaven and met Jesus with the most vivid detail including info he couldn't possibly have known needless to say I immediately ran out and picked up the book..perfect timing as I was having extreme difficulties with my own beliefs. Put it this way the book was a head scratcher ....

Movies I Own by Pat

No posts have been made on this movie yet. Be the first to start talking about Heaven is for Real!