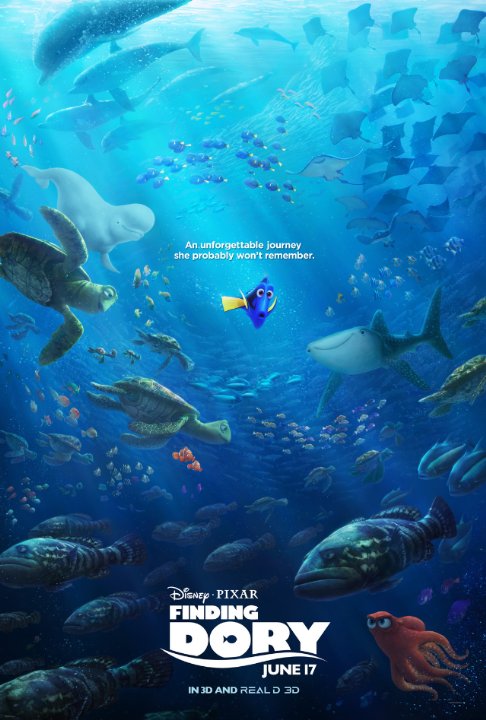 Plot: The perpetually forgetful blue tang, Dory, has a sudden flash of a childhood memory. Recalling "the jewel of Morro Bay, California" Dory, along with Nemo and Marlin, set off to find her family. Winding up at the Monterey Marine Life Institute, she makes some new friends including Bailey, a white beluga whale, Destiny, a whale shark and Hank, a surly octopus. -- Chris Kavan

"Finding Dory" brings the warmth and memorable characters from its predecessor, while also introducing some new ones, but its hard to out do the original.

I loved Finding Nemo and I remembered seeing it in cinemas, but with "Finding Dory" I wasn't looking forward to. I don't know my reasons, just didn't want to see a spin-off to something I couldn't care less about. Of course I gave in and finally watched it. And my judgment I had with the film sadly came true after seeing it. I mean, it's cute and harmless with some humor that I did laugh at. However, with it being a year since it's release, this existing doesn't feel necessary. Pretty forgettable as no one is talking about it (expect for me). In terms of creativity and surprising me, it felt kinda held back. I didn't get that emotional punch that you would expect from Pixar.

FINDING DORY is a completely unnecessary sequel to the PIXAR classic but it's not without charm and entertainment value to spare. Just when you fear the movie will be a boring retread of the first movie, it goes off into a different direction that works in the movie's favor. There are returning cast members and some new ones. The most interesting fresh face is Hank (Ed O'Neill) a cantankerous octopus that Dory befriends.

A sour look crossed my face as my friends and I pulled into the parking lot of the Rave Theater in Little Rock. While I wanted to lose some sleep over âThe Conjuring 2,â the rest of my friends had their sights set on the newest Pixar flick.

Bitterly inhaling my package of raspberry sour straws, I slumped into my seat and made a valiant attempt to dislike this movie. However, much like with last yearâs âInside Out,â Pixar won me over yet again with âFinding Dory.â

Ellen DeGeneres reprises her role from âFinding Nemoâ as Dory: a kind, easygoing blue tang fish who suffers from short-term memory loss. All is well under the sea until Dory randomly experiences a flashback from her childhood of her and her parents. Remembering that she was separated from her family long …

'Finding Dory' is the surprisingly solid sequel to the much beloved 'Finding Nemo'. Here we follow the exploits of memorable (no pun intended) supporting character Dory as she journeys to find her long lost parents. Her positive attitude and ambitious nature make her goal worth complete investment. The fact that she overcomes every obstacle by jumping in head first gives a level of excitement to her adventure. Once the essentials are established at the beginning, the movie pushes forward at a quick pace and doesn't hit any slow downs. Plenty of humor and action are perfectly balanced out with a bevy of new likable characters - the best of which being a seven armed octopus. The "septopus" and Dory are a terrific pair, complimenting each other's faults with their own strengths. …

No posts have been made on this movie yet. Be the first to start talking about Finding Dory!