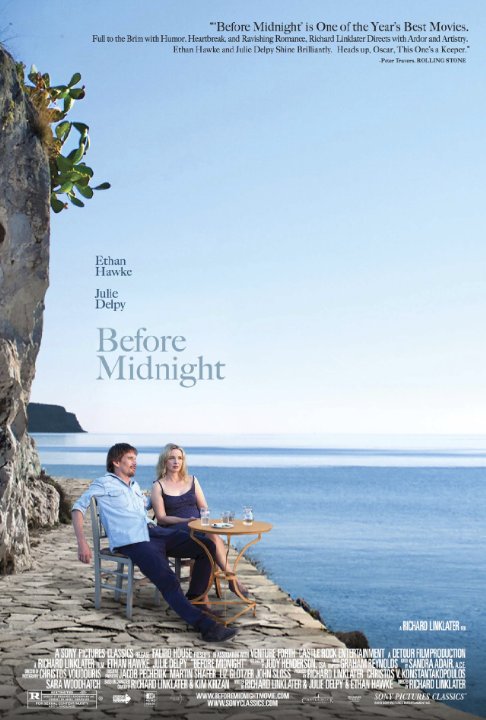 Plot: Two decades after their fateful meeting on a train bound for Vienna, we meet back up with Jesse and Celine now in Greece. -- Chris Kavan

The final chapter in Richard Linklater's three-part character study is the deepest, even if it's not the most engaging.

Liking this movie goes against all logic. It mostly defies all the rules of filmmaking. However, as Hawke and Delpy's character stroll through the south of Greece I find myself hanging on to every word of their dialogue. It's thought provoking, tense, emotional. I love everything about this movie.

If you've seen the previous films (Before Sunrise/Sunset), then you know what to expect from 'Before Midnight'. It's been a pleasure to watch the romantic relationship between these two characters evolve over the course of all three films. Here it seems the most change has happened in the lives of our now 'domestic-partnership' couple, as they've become parents. Things start off light with some great intellectual dialogue scenes between others and themselves, that span a large variety of subject matter, but the conversations are best in the latter half, when it basically becomes an elongated and heated argument of marital problems. This could've been contrived, or even annoying, but I was in full investment because of the realism and having watched them grow closer with each film. …

Provocative, funny, realistic and entertaining. It's method of adding new elements hampered it a little. This felt like a romantic comedy version of Scenes from a Marriage crossed with Crimes and Misdemeanors. We always know we are going to get a well-written plot/screenplay from the Before franchise. This reviewer has seen the first and 2nd installment which eagerly makes this a definite must watch with my significant other. Of course this critic was happy with Before Sunset and could have ended there and was nominated at the Oscar's for its screenplay. Delpy, Hawke and Linklater wanted more with this movie after creating the script 8 years later. Now we can view more than Jesse (Hawke) and Celine (Delpy), who are a couple and parents to twin girls. This rater feels something …

Even though romance is one of my least favorite genres and I have suffered my good share of terrible rom-coms and Twilight fan-fiction, I am proud to admit I finally found the perfect date movie.
This is an excellent romantic drama. It is funny, it is romantic, it is genuine and it is authentic.
The acting of Julie Delpy and Ethan Hawke is never over the top or overly romantic or in love. The delivery of lines is insanely entertaining, because this seems like an actual couple that would be married in real life.
The characters have such distinguished personalities and flaws, it's hard not to like them.
While this is not a movie for everyone, and certainly didn't seem like a movie for me going in, I never found myself bored. The majority of the movie is basically just them talking. …

No posts have been made on this movie yet. Be the first to start talking about Before Midnight!