Plot: Two social misfits goto a "be your favorite animal" party and realize they have nothing in common with the rest of the world but a lot in common with each other.

Slow, but had it's moments. C+

I really dislike movies where the main character(s) are retarded. They at least have very little intelligence. It takes an extremely skilled actor to pull off being dense. Anyhow, not only that, but at a screening, the actors were there and the main actress was patronizing "You Americans probably haven't seen La Strada or Breaking the Waves". She is no Giulietta or Emily Watson. TEN TOP WORST MOVIES OF 2007 (see list)

"Eagle Vs. Shark" by Yojimbo

A terminally shy burger joint cashier thinks she has found her perfect boyfriend in socially inept videogame store clerk Jarrod, who is desperately trying to escape the shadow of his over-achieving dead brother in ever more unfortunate ways. Eagle Vs. Shark, as I'm sure you can tell from the DVD cover, is one of those kooky indie comedies that desperately tries to do rom-com in an "unconventional" way. Of course, all the genre has done is create a brand new set of conventions and this film ticks all the appropriate boxes. It does have a more easy-going charm to it than many of its type, possibly because of the antipodean mentality and Lily is a very difficult character to fail to warm to. The presence of Jemaine Clement from Flight Of The Conchords will be the film's main draw, but … 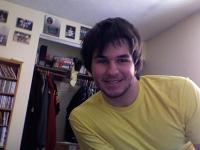 Eagle vs Shark is the story of a man named Jarrod, played by Flight Of The Conchords' Jemaine Clement, and a woman named Lily. Jarrod is a "loser" who is a let down to his family and is constantly thinking of ways to get back at his highschool bullies. Lily is a joke to all of her co-workers and everybody makes fun of her/doesn't take her seriously. Basically the story is just about how they interact with each other and how they effect each other's lives. I suppose this could be categorized as a "romantic comedy", but the vibe is far from it. It is a very funny movie, a very sad movie, and a very moving movie. It shows that everybody has somebody that they can take solice in. I would highly reccomend this movie if you enjoy stories that lack the "showiness" and "cheesieness" of hollywood …

My DVD Films by Danny

Worst Movies of 2007 by Allison

No posts have been made on this movie yet. Be the first to start talking about Eagle vs. Shark!