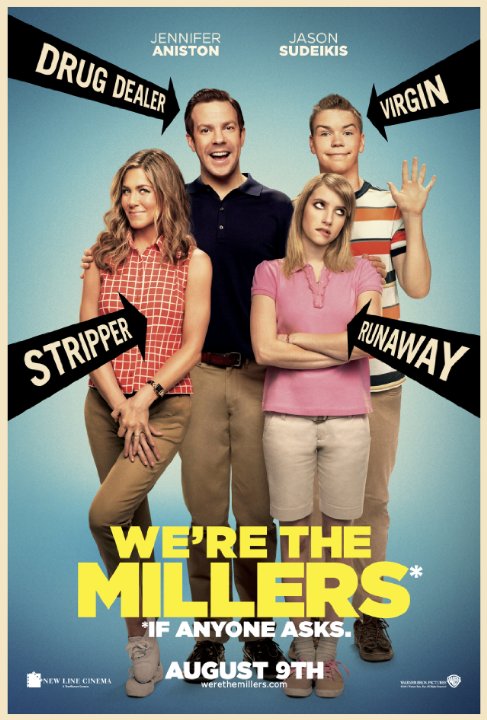 Plot: A long-time pot dealer comes up with a perfect plan to move a huge shipment from Mexico into the U.S. - he will create a brand new fake family to cover his tracks. -- Chris Kavan

You can tell it's trying, but it still comes across as dry and tastelessly lowbrow.

Don't waste your time with this one. As far as comedies go, this was painfully unfunny. I kept waiting for it to end, and it just kept going and going. I did not like it at all. It felt very forced and contrived.

No surprises and predictable but sometimes funny

"You can buy a house and run away from it."

"We're the Millers" fits perfectly with the rest of the comedies (Pain & Gain, The Internship and The Heat) I've seen. I expected it would be a relaxing evening watching a movie after a stressful week. Finally maybe a flick that would make me burst out in a series of dissipative laughter. Unfortunately as with the other films there was not much to laugh about.

Overall it was a fun movie with some witty one-liners and funny situations, but this was too much overshadowed by quite vulgar and downright ridiculous conversations. Average entertainment content with sometimes a feeling that the scriptwriters wanted to make it tremendously easy for themselves by using hackneyed gags that have already been used several times in other films. Cheesy …

This film caught this reviewer totally by surprise. From start to finish this was faultless. Soundtrack was well utilized throughout the picture, all the characters had relevance and the plot though simple, itâs journey was filled with heart and laughter. It revolves around a drug dealer named David Clark, a stripper who is about to get evicted named Rose, an innocent 18 year old named Kenny and a homeless thief named Casey. The transcript has some misses but mostly funny while the acting was solid especially from Poulter. Some soon to be classic lines: âWell, Iâm awake and I speak English so, yeah, I know what youâre saying.â and âF*#k off real-life Flanders.â The picture has offensive scenes and crude humor; itâs still funny as hell from the beginning until the …

Although the movies I find Jennifer Aniston in these days are pretty enjoyable, I was not prepared for her role as a stripper in this and you know what? She actually is quite funny!! Director Rawson Marshall Thurber whose only other movie that I had seen was 04's 'Dodgeball :A true underdog story' a movie I wasn't impressed with I might add, totally redeemed himself with this latest comedy. We're The Miller's star Jason Sudeikis , who I only saw before in Horrible Bosses also costarring Jennifer Aniston, was the film's comedic gem. Sudeikis plays drug dealer David Clark who after getting robbed of all his stash and money gets sent down to Mexico by his boss Brad Gurlinger (Hangover series Ed Helms) to bring back what he refers too as a smidgeon of pot across the U.S. border, in a do it …

No posts have been made on this movie yet. Be the first to start talking about We're the Millers!