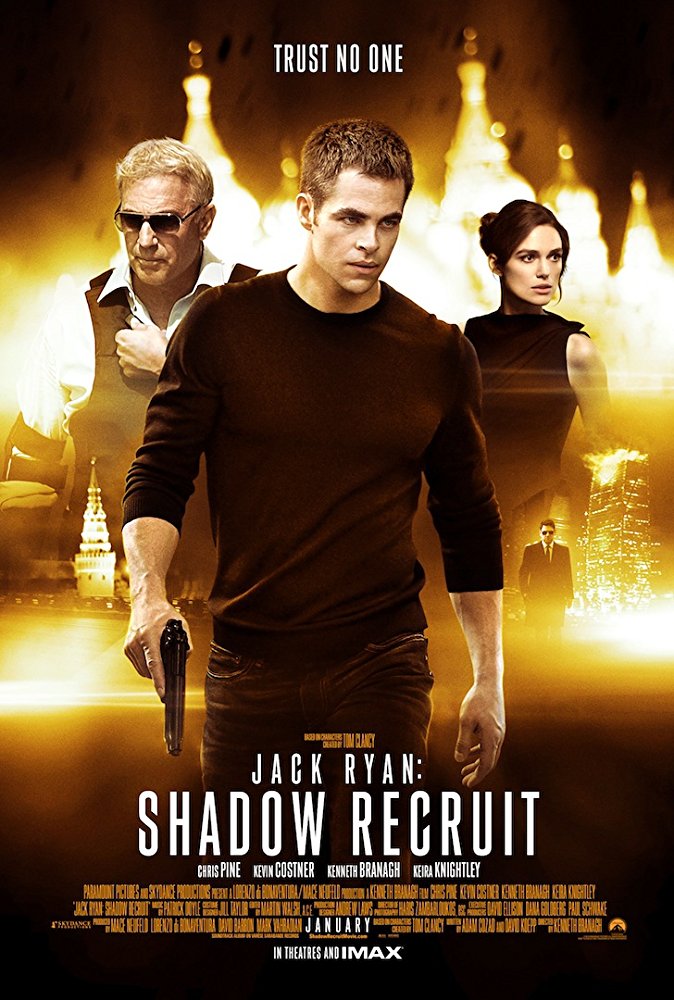 Plot: Jack Ryan is a young covert CIA agent who must race to stop a Russian plot to crash the U.S. economy with a terrorist attack. -- Chris Kavan

If you can get through a rather slow beginning, the movie eventually gets to some decent action, tense moments and an actual plot - but it's nothing we haven't seen before. You would think Chris Pine (of Star Trek fame) would be a good choice - and teaming him with Keira Knightly and Kevin Costner is a treat - but he's just dull as dishwater - even in the big action scenes. Heck, when Kenneth Branagh with a Russian accent is the best part of your movie, well, let's just say it has a lot of issues. I'm guessing we're not going to get a sequel, so don't feel too bad if you don't get invested in this could-have-been series.

Jack Ryan is a young covert CIA agent who must race to stop a Russian plot to crash the U.S. economy with a terrorist attack. This movie started off pretty hard to sit throw if I have to say but the movie does pick up in the middle and it gets more enjoyable.

A very average film with a very simple and unrealistic script., about a guy who gets recruited into the cia and ends up trying to stop the russians attack america basically. its all very cliche stuff. very patriotic twoddle , i did laugh early in the movie at that. and wondered when the statue of liberty would make a appearance and a few moments later there it wasl. the only difference in this movie is there was no creature to destroy it or some other disaster..
what really spoils this film is the whole girlfriend plot and how she ends up with him and getting involved. they killed the movie there and then with that plot. but the whole way they first met has been done so many times. like everything about this film , its like some bad segal movie from the 80's but done with modern …

This picture started of slow, then it began to pick-up and in the end leaves you wondering what happened. The proper introduction to the recruitment of Jack Ryan was really impressive and the realism of the action from start to end was unbelievable. Kenneth Branagh's character's entrance was good and makes him more menacing. It's the type of antagonist you really dread to meet but he he expires is somewhat disappointing, since the build-up was awesome. Pine did a swell job and Costner a slid support. If only thre was more to Knightley's character though. Screenplay was well-written and direction almost seamless. Now for the not so positive points, the realism near the conclusion. How can one not have a broken bone or at least get up immediately after bumping to a van with a …

No posts have been made on this movie yet. Be the first to start talking about Jack Ryan: Shadow Recruit!