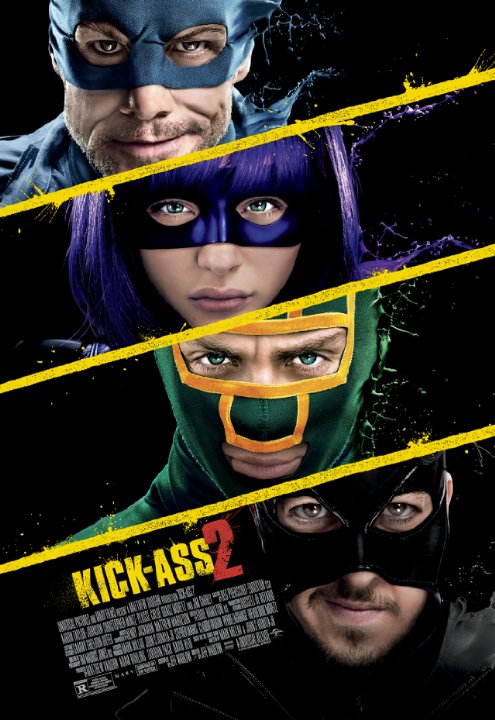 Plot: The legend of Kick-Ass has inspired a group of ordinary citizens to join him and become superheroes in their own right. But Red Mist is planning the ultimate revenge - one that will affect everyone Kick-Ass knows - by forming his own group of super villains. -- Chris Kavan

this movie was nailed by critic's and I think this movie is a lot of fun. jim carry was good in the movie but not for long and some of the bloody in the movie looks to much CG.

Will give you your fill of action - but whereas the original film struck a good balance between the action and more light-hearted scenes - this one is all business. Even the scenes with ChloÃ« Grace Moretz trying to pass as a "normal" high school freshman have an edge to them. That being said, it was still good to see these characters again, and the newcomers (Including Jim Carrey, Donald Faison and Lindy Booth) were welcome as well. Just a bit more serious than I was expecting (though the comic went even further).

Ordinary High School kid Dave decides to revive the career of his crime fighting alter ego, but when Hit Girl refuses to break a promise to lead a normal life he seeks like-minded hero wannabes to patrol the streets. I am a huge fan of the first film so to say Kick Ass 2 was a disappointment is an understatement of the highest order. It's one of those sequels that manages to completely miss the point of the original; gone is the perfectly judged blend of cartoon violence and sly, witty black humour. Instead we have a cross between a frat boy gross out comedy of the most witless kind and a particularly weak episode of Buffy The Vampire Slayer. The violence is ugly, the humour tasteless, the plot paper thin and it completely lacks any of the winning charm and faux naivete of the first …

Bloodier, more action/eye candy but less filling. Dave Lizewski wants to partner with Mindy Macready. Marcus, Mindy's new guardian and friend of her fathers, tells Mindy to stop fighting. Chris transforms into MF while Dave joins Justice Forever, led by Colonel Stars and Stripes, Battle Guy (Dave's friend, Marty), Dr. Gravity, Insect Man, Night-Bitch, and the parents of a missing child named Tommy. Chris forms his own team. Some wonderful lines: "My dad wasn't afraid of living." - Mindy. "But this is the real world." "This is your life you've got to live it." - Dave. "Try to have fun, otherwise whatâs the point?" - Stars & Stripes. Themes of bullying, finding your identity, friendship, teamwork and acceptance were well exemplified. Its low-lights were the lack of focus on …

Definition of summer movie - this movie.

The first Kick-Ass movie was a pretty big success. You could almost say it garnered a cult following, because so many loved it for its exceptional action and humor, the different take on superheroes.
I have mixed feelings about Kick-Ass. Sometimes I loved it, sometimes I had severe problems with it. For example, the action was filmed brilliantly by Matthew Vaughn and Chloe Grace Moretz stole the show as Hit-Girl, other times I cringed at the sight of children being beat up.

So what did I think of Kick-Ass 2? I think it's exactly like the first one, only just a little bit less enjoyable.
It has exactly the same things to love and to hate, it has the immature humor, over-the-top action and wanna-be superhero characters, but has more violence against children and again scenes that made …

No posts have been made on this movie yet. Be the first to start talking about Kick-Ass 2!